The year 1954 is usually regarded as the birth year of French-speaking literature in Morocco. Then “Boite à merveilles” (“The ashes with wonders”) was published by Ahmed Sefrioui and “Le Passé simple” (“Past time”) by Driss Chraai. The former can be said to be examples of ethnographic literature, viz. the depictions of Moroccan everyday life, which is primarily aimed at a French audience seeking the exotic or picturesque. But there was also, as with Chraebi, a completely different direction that told of the feeling of alienation and of revolt against the traditional Moroccan society. 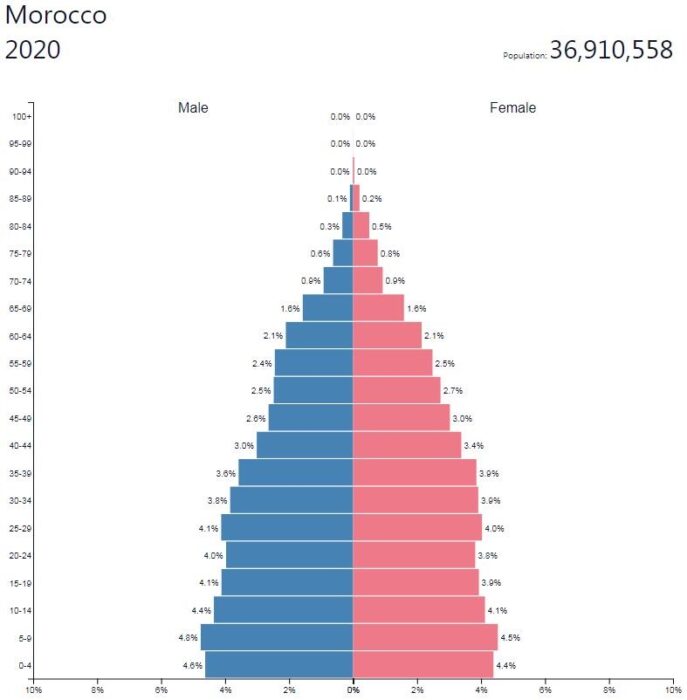 The magazine Souffles (1966-72) was founded by Abdellatif Laâbi and came to mean not only a new thinking on literary issues but also ideological positions. Topics that were now being raised were, for example, seeking an identity, revealing the bourgeois and neo-colonial values ​​of society, and criticizing social and political obscurantism. Among the magazine’s co-workers are the most significant authors: Mohammed Khaïr-Eddine, the Swedish translator Tahar Ben Jelloun, Abdelkébir Khatibi, Abdellatif Laâbi and Mostafa Nissaboury. During the 1980’s and 1990’s, the novel was developed with new writers such as Abdelhak Serhane. Among those who broke through in the 1990’s are Muriel Barbery, whose multiple award-winning novel “L’élégance du hierisson” (2006; “The Hedgehog’s elegance”) became a bestseller around the world.

After its release, the government-backed Center cinématographique Morocain made sure that a domestic film production started, and by the end of the 1960’s the first feature films were made, mainly Hamid Benanis (born 1940) “Wechma” (1970). However, the filmmakers, who are educated in Paris, Rome or źódź, have found it difficult to find an audience for their films in a market dominated by mass products from Egypt, France and the United States. To this is added the problems that the state censorship causes directors to try to give a realistic description of social conditions. Souheil Ben Barka (born 1942)) from the 1970’s occupies an important position through his own films such as “La Guerre du pétrole n’aura pas lieu” (1975) and as producer and mentor for new generations. Among the most prominent names are Moumen Smihi (born 1945), Mustafa Derkaoui (born 1944) and Jillali Farhati (born 1948) and among the debutants in the 1980’s Mohammed aboul-Waqqar and Farida Belyazid (born 1948), one of Morocco’s few female filmmakers alongside the documentary filmmaker Izza Génini (born 1942). Morocco annually produces about three feature films.

Especially the neighborhoods around the city of Ouarzazate is a popular filming location for foreign films, including. Orson Welles “Othello” (1949), David Lean’s “Lawrence of Arabia” (1962), Martin Scorsese’s “Last Temptation of Christ” (1988), Ridley Scott’s “Gladiator” (2000) and “Body of Lies” (2008).

Morocco has a long and still strong craftsmanship tradition, developed partly in an Arab-Islamic direction in the urban artisanal neighborhoods and partly among the people of the mountain regions and the Sahara region in more rustic materials and local forms. During the almoravids and almohads (1056–1269) and the indigenous maritime dynasty (1269–1548), the art found characteristic forms in the decoration of the metal crafts, in leather works with colored and pressed decor (morocco) and in fabrics, embroidery and rugs in strong colors.

In the craft and interior decoration (tile panels, wooden screens and doors, furniture and objects with painted decor and intarsia of ebony and mother-of-pearl), geometric star patterns dominate in complicated forms. The ceramics production flourished in Fez during the 18th century with a production, which is still alive today, of glassware glazed in strong colors, mainly cobalt blue on a white background.

In the cities, jewelery is made of silver with engraved decor and enamel cloisonne as well as gold jewelery in primarily filigree work. Calligraphy has also been developed with artistic skill in handwriting, often illuminated in African tradition with geometric ornaments in saturated colors, mainly brown, red and black.

In southern Morocco there are a large number of fortified Berber villages, several of them with monumentally shaped walls and tower buildings. They are a unique remnant of North Africa’s Arab-Arab architecture. During the dynasties of the Almoravids and Almohads (1056–1269), a characteristic architecture was created, with the arch as a constructive and decorative basic motif in countless variants. The four royal cities of Fès, Meknès, Marrakech and Rabat preserve both neighborhood patterns as well as mosques, city walls and other architecture from this era. During the Marines (1269-1548), among other things, mattress as a building type. It is characterized in Morocco by small-scale ornamentation in stucco and wood, geometric ceramic mosaic and green glazed brick. A stable architectural tradition was established during these centuries, in contact with both Spain and the rest of North Africa.

During the French patron era of the 20th century, European-style neighborhoods were erected as new centers outside the existing cities. The older buildings were thereby slimmed down, but rarely preserved. Also an oriental architecture was created by French architects and planners, especially in Rabat and Casablanca. In the past decades, the surviving craft tradition has been utilized partly in restorations and partly in many official and private new buildings. All in all, this gives today’s Morocco a distinct architectural identity.

Morocco’s music practice is in large part a fusion of Arabic music and West African music with the influence of the Berber music. Among the latter, instruments such as the lute gunbri and the hand drum bandir are played. At outdoor parties, these are used together with ghayta (double tube instrument) and tabl (cylindrical drum) as well as unanimous responsorial or antiphonal singing.

Popular music is a product of both indigenous and colonial traditions, mainly French. Religious roots, such as gnaoua and Sufic music, have continued to be an important element of popular music. In recent times, gnaoua has proven to be possible to combine with various modern music styles such as jazz, funk and hip hop.

The music style rai, which was developed in Algeria during the 1980’s, is of great importance in Morocco. Hip-hop has become an increasingly important genre; H-Kayne and Fnaïre are two of the best known groups. There is also a growing interest in hard rock, which has, however, been thwarted by the authorities; In 2003, members of three hard rock bands were imprisoned accused of playing “anti-Islamic music”.