Practically all of Africa lies between 35 ° north latitude and 35 ° south latitude, that is, symmetrical to the equator. Nevertheless, there is a big difference between the climate in the north and south. The northern region has a large extent in the west-east direction and is characterized by neighbors to Europe and Asia. The climate there is strongly continental, while further south the sea is more influenced by the sea in the west and east. The rainfall distribution is dominated by the subtropical high pressure belts where the axis in the mean is close to 30 ° north latitude and 30 ° southern latitude, but which commutes with the season in the direction of the summer hemisphere. Between these high pressures we find the equatorial rain belt that lies farthest north in July / August, farthest south in January / February. Monsoon in the Indian Ocean and in the Gulf of Guinea also affects the rainfall distribution.

The continent has a smooth coastline and simple topography, which should indicate a fairly uniform climate. This is the case for the temperature, but not for the rainfall. The precipitation systems of the west wind belts will only affect the northernmost and southernmost regions during the winter months. Tropical low pressure from the Indian Ocean touches the islands, especially Madagascar, and some of the east coast south of the equator, most often in January and February. Precipitation in Africa is significantly related to cloud systems that form over or near the continent.

Africa is supplied with more solar energy per unit area than any of the other continents. In the Sahara there is a larger area with more than 4000 sun hours per year. A smaller maximum area of ​​over 3600 hours is also found near the southern turning circle, but it is limited to a narrower zone near the west coast. 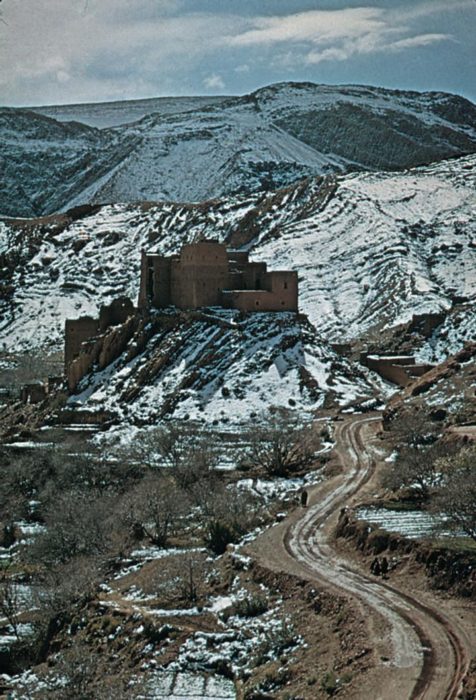 The air temperature is highest north of the equator, where there are also large arid areas and where the sea’s influence is least. Maximum temperatures above 50 ° C have been measured in half of the Sahara, and it is estimated that up to 60 ° C may occur in some areas where there have been no measuring stations. Record high single quotations given (58 ° C from a station in Libya) are uncertain, because in representative sunshine it is difficult to obtain a representative air temperature. The highest annual average in the world is measured in the Danakil lowering in Ethiopia. At Dallol, 75 m below sea level, an annual average of over 34 ° C is calculated, while the highest and lowest single measurements are 49 ° C and 21 ° C respectively. The daily average temperature varies little with the season. The difference between the norms for the warmest and coldest months is less than 6 ° C for one third of the area. Only areas farthest north and south get more pronounced winter and summer. However, the temperature variation throughout the day is large, averaging more than 15 ° C over large areas and up to about 20 ° C in the Sahara. In the northern and higher parts of the desert, night temperatures of several degrees of cold have been measured in connection with wintry cold air raids from Europe and Asia. The highland farthest south receives winter cold in connection with radiation in cloudless, calm weather. In strong solar radiation, a thin film of heated air may form over desert sand, and beams of light that fall almost horizontally can be totally reflected. This causes you to see a mirror image, most often of blue sky. A trembling movement can give the impression of a small rippled sea (“Satan’s lakes”). In such cases, the temperature drops rapidly with the altitude. For average temperatures, a fall of 0.5-1.0 ° C per 100 meters can be expected, at least in humid areas. While it is dry in the lowlands, along the slopes of the mountains can be lower temperature with greater relative humidity, often with clouds, so that it can grow forests.

According to AbbreviationFinder, Africa’s climate is primarily a matter of rainfall. It varies greatly with time and place, and there can be major differences from one rainy season to the next. For twelve stations in the Sahara, the lowest measured annual precipitation is 0–50 mm, while the highest is 50–367 mm. A single rainfall can give as much rainfall as it usually does for a whole year. In any case, a description of the precipitation climate must also give a picture of the variation pattern. The third part of Africa’s area receives more than 50 percent of the annual rainfall during a three-month rainy season. Only in a zone around the equator and in some coastal areas does drying really lack.

Climate zones from north to south: A strip from the Atlantic coast and east along the Mediterranean has rainy season in winter. This Mediterranean climate is most typical in Morocco, Algeria and Tunisia. The Atlas Mountains receive annual snowfall sufficient for winter sports. Further south follows a belt of steppe climate, where grass and shrubs are the natural vegetation. The rainfall is variable and uncertain, often between 200 and 400 mm which falls during three winter months. To the south, the steppes turn into desert with annual rainfall mostly below 200 mm. The rain falls most often as showers, which are most easily triggered over mountain slopes. There is no obstacle to the water that accumulates in dried-up river beds and can cause sudden flooding in low-lying areas, where the nomads often camp. Both in desert and steppe areas there are significant amounts of groundwater from a previous rainy period. Drilling and corrosion on the groundwater have caused groundwater levels to decline. Evaporation from a surface of water in this climate occurs in 4-5 m per year. South of the desert there is again a belt with steppe climate. The rainy season is in the summer when the equatorial rain belt is at its northernmost location.

Sahel, the southern border of the Sahara, has experienced severe drought disasters at times. The reason is mainly natural fluctuations in meteorological conditions. When the rainy season fails, it can not be expected rain until about 3/4 years. In the meantime, there is overgrazing with destruction of the grass deck and predatory operation on bush growths for fuel. The fields remain open to wind erosion and sand escape. When the rain may finally come, there can be little benefit to it. To the south, the steppes turn into savannah with longer rainy season and sufficient rainfall for trees to grow. In an area near the equator there is no actual drying time and the annual rainfall is over a few thousand mm; here you have tropical rainforest.

Two areas near the equator have special conditions: 1. The land north of the Gulf of Guinea is under the influence of the West African monsoon which is caused by the Southeast Passage crossing over the equator, bending to the right and blowing across the coast from the southwest. Here are the most rainy areas in the continent with over 2000 mm of rainfall, locally up to 10,000 mm per year. In January, the meeting point between the monsoon and the dry northeast pass will be on the coast at approximately 5 ° north latitude. As the temperature over the Sahara rises during the spring, the pass is weakened and the monsoon needs as far as about 20 ° north latitude. But this varies from year to year. The fate of millions of people is linked to this battle between dry and humid air. 2. The Horn of Africa (between the Gulf of Aden and the equator) has less rainfall than similar east coasts on other continents. In winter, the northeast monsoon provides precipitation to the far north, while the mountains shield the rest of the horn. The summer rain that is typical of these latitudes will be reduced. The southwest monsoon over the Indian Ocean does not blow into Africa, but along the coast, accelerating towards the powerful “heat imprint” over South Asia.

South of the equator, the climate zones are not that simple, which is due to more complicated topographic conditions and greater influence from the sea. The central area has savanna climates, which to the south change into temperate climates, both with summer rain. Closer to the turning circle is the steppe climate, while the desert (Namib Desert) is found in a narrow strip along the west coast. Along the east coast, where the pass stands, is the tropical rainy climate with the most rainfall in the summer. The southernmost part of Africa has a temperate climate with rainfall throughout most of the year. It is not uncommon for snow in higher regions here in winter.

Generally, there is little wind over Africa. In many arid areas, there are local, strong gusts with sand and dust mounds attached to cloudy clouds. Occasionally, so-called winding lines can be clouds in a row, which can give veritable sandstorms. The cloud base is often very high, and the precipitation that reaches the ground is not sufficient to dampen the sand escape. Low pressure off the Mediterranean coast can produce strong and dusty desert winds that affect cultivated and built-up areas. Simoom (‘toxic wind’) is one of several names used. Harmattan is a larger-scale dust-carrying airflow. It blows from the northeastern edge out of the Sahara and especially touches winter areas from the Gulf of Guinea to Morocco. This is the Passat, enhanced by a wintry monsoon effect. Up to approximately 100,000 tonnes of soil, dust and sand can be transported off the coast annually and can occasionally be traced all the way to the Caribbean. In the passage zone, surface water is driven away from the west coasts both north and south of the equator. Cool deep water flows up (upwelling) and often causes fog or mist.