Mali’s French-language literature has emerged mainly after 1945. The upswing came at the end of the 1960’s, when Yambo Ouologuem published his historical fresco “Le Devoir de violence” (1968; “Violence”). It was a parody of the traditional chronicle form that can be said to form part of the so-called songhai tradition, where the stories originate from the heyday of the empire. In the 1970’s, literature showed signs of greater independence, something that historian Amadou Hampaté Bâ contributed to. During the 1970’s and 1980’s, Massa Makan Diabaté emerged as one of the most important writers of French-speaking Africa. Among Malian writers active in the 21st century are Moussa Konaté. 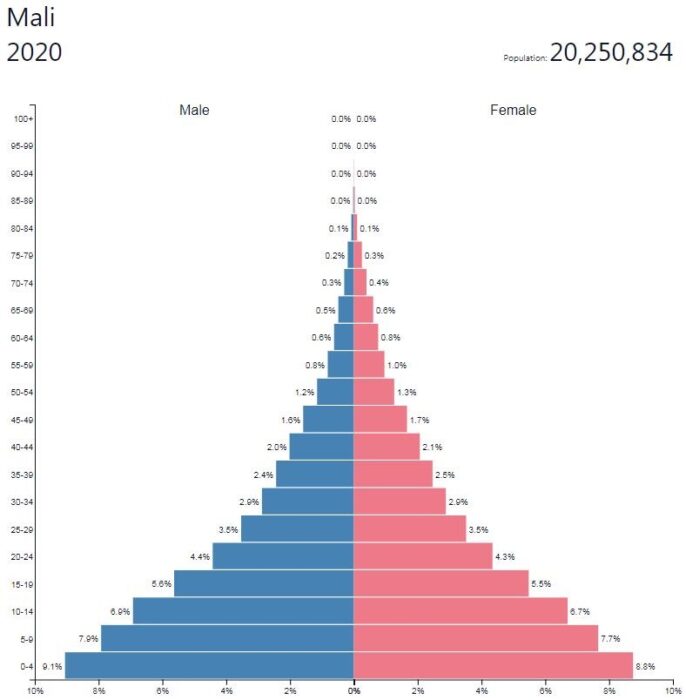 In 1962, a national film institute, the Office cinématographique national de Mali (OCINAM), was founded, which mainly promoted the production of documentary films for the government. In 1976, OCINAM was transformed into the Center national de production cinématographique (CNPC) for the production of educational and information films. By then, the first feature film was already available in feature films, “The Muso” (1974) by the Moscow-trained Souleymane Cissé. This one has with “The Bearer” (1978), “The Magic Light” (1987), “Waati” (1995) and “Min Ye” (2009) convinced as one of Black Africa’s most exciting filmmakers, a critic of the old tradition-bound society as well as of the new, modern with its varieties.

New director talents have also noted great successes at festivals, including. in Cannes. Mention should be made of Cheick Oumar Sissoko (born 1945) with “Guimba” (1995), Adama Drabo (1948–2009) with the audience success “Taafe Fanga” and Abdoulaye Ascofare (born 1949) with “Faraw!” (both 1997). Mali produces 2–3 feature films annually.

Several people within Mali’s borders have been recognized for their excellent woodwork. Dogon makes masks in linear shapes with strong verticality; bamboo is known among other things for head masks with animal motifs but also produces wooden figurines in a design language related to dogons. Dogon and bamboo ornamentation and design language in residential and warehouse buildings have long been interested in art and architectural historians. The swivel doors of the residential buildings are a particularly noted art form. The motifs are carved in deep relief and are usually figurative.

Senufo resides among other things. within Mali’s borders and produces masks that, like Bambara’s and Dogon’s art, have attracted great interest from foreign collectors. A large number of masks and figurines are therefore produced today for the foreign market. The nomadic people fulani are known for their goldsmithing, beautiful leather and metal work as well as the distinctive male face and body painting, which still exists today at certain festivities.

Already in the West Africa, in the 1300’s, a distinctive clay architecture was developed, a synthesis of frontal Oriental, Islamic and local African traditions, which had its most monumental design in the mosque architecture in Mali. The style, which belongs to the Sub-Saharan region, is usually called Sudanese. The building material is sun-dried brick, stone and clay reinforced with thin, protruding tree trunks, so-called toron. The mosques are landscaped with an open walled courtyard, covered, hypostyled prayer room and broad, four-sided minaret of the so-called sawma type. The oldest preserved mosques are the Djinguereber Mosque and the Sankoré Mosque in Timbuktu (1300’s) as well as Askia Muhammad’s tomb mosque in Gao (16th century), all from the Songhai period.

Reconstructed and newly built mosques in a “national” style designed under Western influence are for example. those in Djenné, Mopti and Niono (1900’s). Characteristic is a striking height end with vertical wall reinforcements. The style has also influenced the colonial public buildings in the cities, as well as the National Museum erected in Bamako during the 1980’s.

Music life is characterized by Mali’s location between black Africa and the Arab world and the country’s multi-ethnic relations. The music reflects both seasonal changes as well as religious rites and important events in the life cycle of the individual and the collective. Professional musicians (see griot) are often responsible for this musical performance. Drums, from small hourglass drums to large ceremonial drums (tabala), are natural elements of ritual music. Guitars, lutes and harps are usually associated with epic vocals. In addition to the string instrument choir, there is the nocturnal type ngoni. The xylophone bala is considered to have magical power and was previously used in the Malay king’s head for war purposes.

As in other West Africa, popular music is a mixture of Arabic, African, Cuban and Western styles. After independence, state-funded orchestras were created in all regions of the country, including Orchestra Nationale A and Ensemble Instrumental National. Cuban music was very popular during this time, but the musicians were encouraged by the authorities to manage Mali’s native music heritage. Two of the dominant bands in the 1970’s were Les Ambassadeurs du Motel and Le Rail Band du Bamako, with singer and future big star Salif Keita.

Traditional instruments still play a big role in Malian music. Sidiki Diabaté (1923-96), whose son Toumani Diabaté has developed the choral music and became one of the country’s biggest musical stars, is often mentioned as the most important choral player in the 20th century. Mention can also be made of Djelimady Sissoko and his son Ballake Sissoko (born 1968). Two of the most prominent ngoni are Bassekou Kouyate (born 1966) and Moriba Koïta. Well-known ball players are Kélétigui Diabaté (born 1930) and Lassana Diabaté (born in Guinea 1971).

Female artists are traditionally very prominent, especially in the music style wassoulou, which originated in the Wasulu region in the southern part of the country. The biggest star of the genre is singer Oumou Sangaré (born 1968). Other well-known female musicians are Kandia Kouyaté (born 1959), Ami Koïta (born 1952), Kokanko Sata Doumbia (born 1968) and Rokia Traoré (born 1974).

Guitarist Ali Farka Touré is one of the internationally best known artists. The duo Amadou & Mariam have also achieved international success, as has the Tuareg band Tinariwen. Mention can also be made of guitarist Djelimady Tounkara (born 1947) and singers Kassé Mady Diabaté (born 1949) and Abdoulaye Diabaté (born 1956). As in other French-speaking West African countries, hip-hop has become an important genre in Mali.