The traditional arts and crafts in Liberia are mainly associated with the secret societies, for example. poro and sande, in which the masks and free sculptures personify the ancestors and the spirit world. They are usually cut from a single piece of wood, but some masks are made of e.g. fabric and animal skins with metal and ivory decorations, where Christian and Islamic forms can be discerned. In general, the art is characterized by human and animal-like forms in idealizing realistic or abstract expressionist style. The shape elements appear on everyday objects such as baskets and earthenware as well as in modern Liberian art. Among the country’s established artists are Winston Richards, Cietta David Mensah and IKE Danquah. 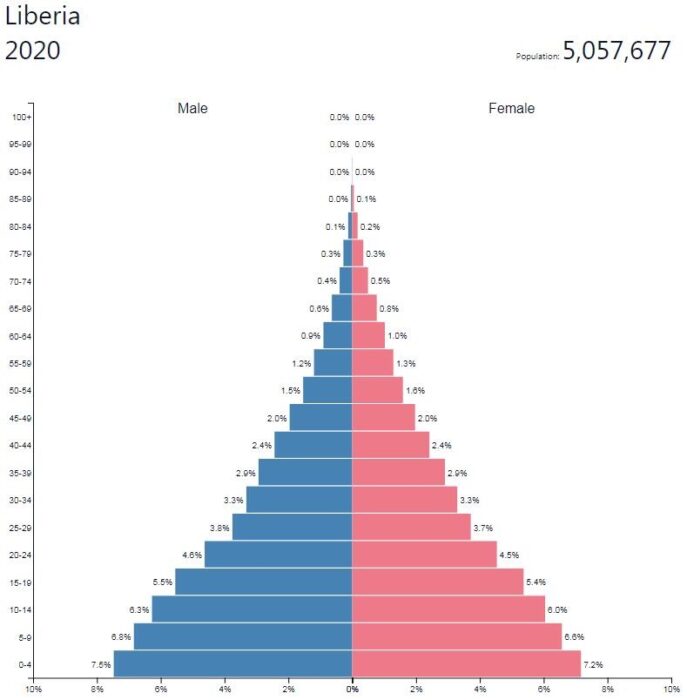 The vocally dominated music is characterized by responsorial melodic structures, polyrhythmics and a collectively performed part with complicated multi-concordance (often based on ostinato technique) that culminates in expressive and acrobatic dance. Such music is indispensable both in ceremonies that deal with the life and annual cycles of the groups – often structured in secret societies – as well as at festivals and other social gatherings.

Early popular music was heavily influenced by both Western music and the West African popular genres (from Ghana) and palm wine music (from Sierra Leone). In developing a more prominent Liberian popular music, Molly Dorley was important as was Anthony Nagbe, who with his band Tejajlu Music Group was one of the first to sing in native languages. Before the country was torn apart by bloody civil war, patriotic songs such as “Sweet Liberia” with Zack & Gebah (really Gebah and Maudeleine Swaray) and “OAU Welcome to Liberia” with Liberian Dream were major hit songs.

During the 1990’s, the country’s musicians instead appealed for peace with songs such as “Stop the Fighting” with Zack Roberts and “We Want Peace” with Gebah and Maudeleine Swaray.

Other successful artists are the singers Miatta Fahnbulleh, Fatu Gayflor, Hawa Daisy Moore, who all live or have lived in exile. An example of artists who can be inspired by traditional music is Won-Ldy Paye.

Foreign influences still apply, but nowadays mainly in the form of reggae and hip-hop, from which the domestic variant hipco with often political texts has emerged.