In the Ndebele and Shona languages ​​there are various forms of oral literature. Christian missionaries helped develop a writing language. The first novel on the shona is Solomon Mutswairo’s “Feso” (1956).

Literature in English first paid tribute to European imperialism, but soon there was a backlash that revealed the colonization as a danger to genuine African life. Black writers such as Stanlake Samkange, Ndabaningi Sithole and Wilson Katiyo had a distinctly documentary approach, while Doris Lessing expressed her harsh criticism of white African society in autobiographical novels. 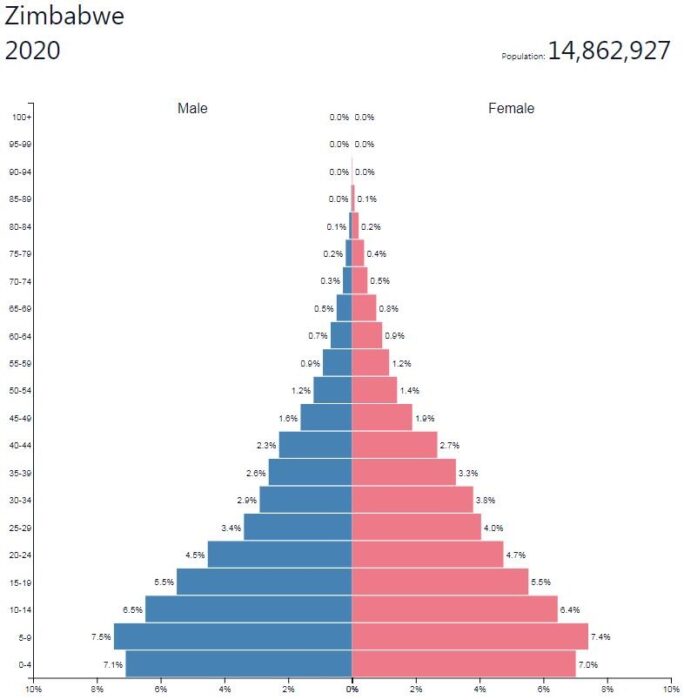 From the 1970’s, a new generation of black writers emerged who charted society’s change. Charles Mungoshi’s masterpiece “Waiting for the Rain” (1975) focuses on a young man’s state of mind, while Dambudzo Marechera’s novels in “House of Hunger” (1978) describe brilliant prose describing physical violence. “Nervous Conditions” (1988; “Rootless”) by Tsitsi Dangarembga is a depiction from a female point of view of emerging social and national consciousness.

Two of the most famous Zimbabwean writers of recent decades are Chenjerai Hove and Yvonne Vera. Notable debuts in the 00’s are Petina Gappah’s short story collection “An Elegy for Easterly” (2009; “Grief Song for Easterly”) and “The Boy Next Door” (2010; “The Boy on the Other Side”) by Irene Sabatini. Mention may also be made of Alexander McCall Smith, who grew up in Southern Rhodesia (now Zimbabwe).

In 1890 Fort Salisbury (present Harare) was founded. The land was divided into a rectangular grid with 2,500 plots. The clearing of the plots was carried out by the newly established city administration. When the train reached Salisbury, the city grew rapidly around Cecil Square and Manica Road north of the train station.

During the 1930’s and 1940’s, the city underwent a strong development, which among other things. meant that many larger buildings were erected. Even today, there is a well-preserved city center with colonial architecture. In addition, the city is characterized by its well-managed residential areas and park-like suburbs. During the colonial period, the indigenous population lived far from the city center in so-called townships. After 1980, efforts have been made to counter segregation through a comprehensive housing program; the houses were built with low-cost loans and with a relatively high standard.

Zimbabwe’s music is primarily the music of the Shona people. Drum and dance ensembles are important elements in its musical life, and several types of drums are common. Drum and dance are so closely related that one concept, ngoma, is used for both activities. Otherwise, shona is best known for its polyphonic song and mbira game. Mbira is a lamellaphone that comes in four different forms, the largest with over twenty lamellas arranged in two manuals that are placed in a half gourd for sound-enhancing purposes. Mbira is played in pairs or in groups of pairs.

An instrument for more individual music making is the musical arch, Shona’s only stringed instrument, which comes in three main types. These various instruments are mainly used in ceremonial contexts, such as at initiation, wedding and funeral, crew dance and installation of chieftains. Drums are then combined with rattling instruments, rattles with mbira, but mbira never with drums.

Mbira is also used in profane popular musical contexts. Zimbabwe’s best-known artist, Thomas Mapfumo, along with his band Black’s Unlimited pioneer in electric mbira music, called chimurenga. Mapfumo, who in the 1970’s fought for the country’s independence, has felt compelled to go into exile because of his criticism of the Mugabe regime. One of the internationally best known mbira players is Stella Chiweshe (born 1946).

The artist who, alongside Mapfumo, has had the greatest importance since independence is Oliver “Tuku” Mtukudzi (1952–2019), who with his band The Black Spirits partly managed Shona traditions and partly created what has come to be called Tuku Music by experimenting with foreign influences. Another popular genre is the guitar pop jit; well-known bands are The Four Brothers and The Bhundu Boys. Among those who play rumba and the native variant sungura are some of the country’s most successful artists, including Simon Chimbetu (1955–2005), John Chibadura (1957–99), Leonard Dembo (1959–96), Leonard Zhakata (born 1968), and Alick Macheso (born 1968).

Since the late 1980’s, gospel has become one of the most important forms of music. Jonathan Wutawunashe became one of the biggest stars early on, while Charles Charamba (born 1971) with the Fishers of Men group broke through big during the 00’s.

Among the artists from the ndebeledominerade southwestern part of the country include guitarist George Sibanda, who was a big star in the 1950’s, jazz singer Dorothy Masuka (born 1935), Lovemore Maja Ivana (born 1952), vocal group Black Umfolosi and singer and bandleader Albert Nyathi (born 1962).

Music life in Zimbabwe has suffered because of the Mugabe regime’s policy, despite its attempts to legislate forcing the state radio to mainly play domestic music. The artists who choose to write and perform music in support of the government risk losing their audience.