Due to the many local languages ​​and their varying mixtures with English, Zambia has hardly any fiction. The course uses standard English, which is also the language of Dominic Mulaisho’s novels. Stephen Andrea Mpashi is the most famous author who has written in the language bemba. In addition to these can be mentioned Kenneth Kaunda’s biographical and political work “Zambia Shall Be Free” (1962). Zambian drama told the history of the people in the 1950’s, as in Andreya Masiyes “The Lands of Kazembe” (1973) and FM Mulikita’s “Shaka Zulu” (1967), but developed into a more popular theater under Kabwe Kasoma’s direction.

Among today’s Zambian writers are Ellen Banda-Aaku and Geoffrey Musonda. 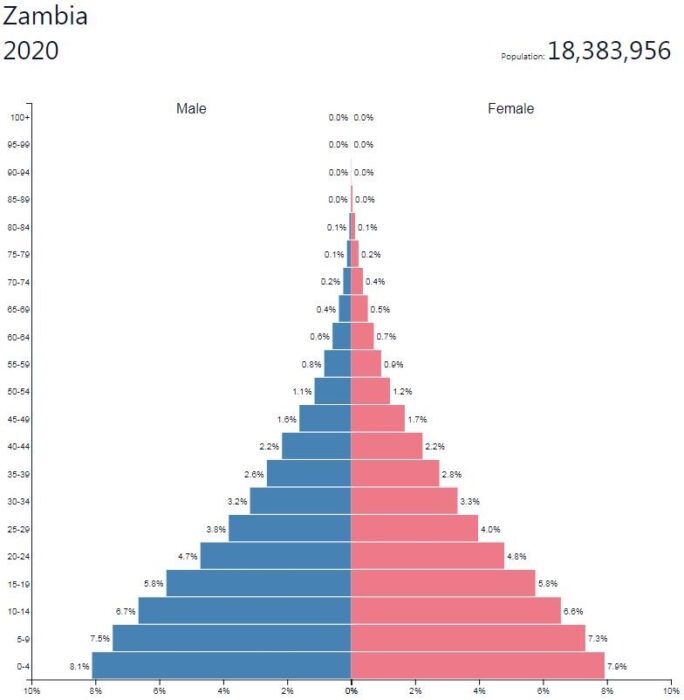 In 1931, the then British colonial power decided to move the capital from Livingstone (now Maramba) to the small railway community of Lusaka. The city is one of the few in Africa designed by a city planner. The planning solution is similar to that of New Delhi, India, with large avenues spreading at acute angles from a series of monumental government buildings. The generous construction of a garden city became the governing plan for long after independence and has maintained its topicality to this day. Important buildings such as the Supreme Court, Secretariat and City Hall are gathered in Lusaka along an avenue on a smooth mountain ridge. The triangles between the city’s avenues are divided into different residential areas, including special areas for the indigenous population. Lusaka’s growth after independence was among the strongest in Africa and led to the formation of large slums on the outskirts of the city. About half of the population lives in unplanned housing areas, where there is a shortage of running water and sewage, and where there are no common service facilities such as schools and health clinics.

In remote rural areas, some of the traditional architecture remains. The Chewa people on the border with Malawi build their house frames as round bamboo baskets covered with thatched roofs. Tonga on the Zambezi River erects its simple houses on an elevated wooden platform to avoid flooding. Lozi in western Zambia uses different kinds of grass to build their easily removable houses.

Otherwise, traditional music is mainly vocal, and the country’s various folk groups can be divided according to the form of polyphony they practice. At bemba, luvale and chokwe, singing in threparallels dominates with occasional elements of sexes, while other people favor parallel singing in blocks. Today’s Christian church music consists mostly of Western hymns transmitted to the local languages, while urban music has since the 1950’s derived its impulses partly from South Africa through forms of music such as jive, painela, sinjonjo and pata-pata, and partly from Congo (Kinshasa) that is there.

Zambia’s first indigenous popular music group was the Lusaka Radio Band, later known as the Big Gold Six Band, affiliated with the state radio company. Two of the most popular artists in the 1970’s were Emmanuel Mulemena (1937–82) and Paul Ngozi (1949–89). After Mulemen’s death, his band continued successfully under the name of the Mulemena Boys. Early Zambian rock music, Zamrock, was often based on traditional rhythms and played with a mix of Western and traditional instruments. One of the best known groups is the Great WITCH.

In the late 1970’s, President Kenneth Kaunda ordered that 95% of all music played on the radio be domestic. However, foreign influences, such as the rum-based Congolese soukous, continued to play a major role. In the 1980’s, the dance music style arose calendula, which was named after a type of bass guitar. This and the related genre manchancha is spread by groups such as the Serenje Kalindula Band, Amayenge, Masasu Band and Shalawambe and PK Chishala (1957-96). Among groups that have achieved success in the 2000’s are Mashombe Blue Jeans and Glorious Band.

The economic crisis and the HIV / AIDS epidemic hit the music industry hard from the 1980’s. Among the most successful groups in the 1990’s were the Sakala Brothers. Others were inspired by American and Jamaican music such as hip-hop and reggae, including Daddy Zemus (really Anthony Kafunya; 1968–2011), who recorded several hit songs in the mid-1990’s and was a pioneer in zamragga.

Mention can also be made of Ballad Zulu and JK (actually Jordan Katembula; born 1978). Even gospel is a significant genre of music in the country.