The English-language literature gained its center in the Makerere University through, among other things, Penpoint magazine, founded in 1958, and an important author’s conference in 1962. Several types of literature can be distinguished. Okot p’Bitek’s and his followers’ poems contradict the traditional but especially in the north threatened society, while Barbara Kimenye talks about the village’s secure continuity in the central part of the country. In novels and dramas, Robert Serumaga depicts the effect of political violence on everyday life. As in other African countries, an unpolitical, amoral urban novel has also emerged. Outside of these directions, Taban lo Liyong develops his own fragmentary style of poetry and prose. In the mid-1970’s, the political turmoil drove most writers out of the country. One of the exile writers is Moses Isegawa, now a Dutch citizen, whose acclaimed novel “Abyssinian Chronicles” (1998; “The Despot’s Masked”) has gained wide circulation. Another is the playwright George Seremba, who among other things. is based on his own experiences of political violence in the 1970’s. 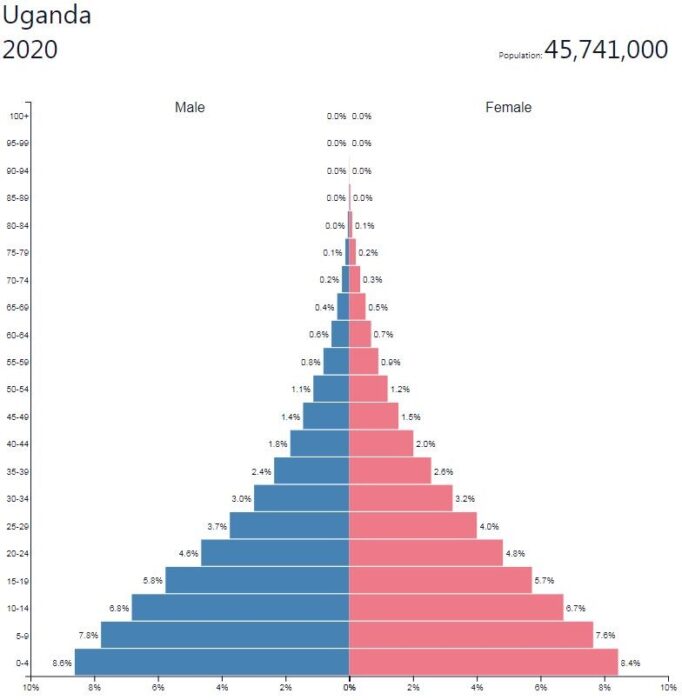 Uganda’s music traditions are mainly pentatonic, which is evident both in the vocal music with its alternating song between vocalist and choir and in the instrumental music with its ensembles usually consisting of combinations of flutes, trumpets and drums (Uganda drum). Other important instruments in Uganda are musical arcs, lemons, lyres, string harps, fiddles, bells, rattles, lamellophones and various forms of xylophones (eg amadinda and akadinda). In Uganda’s former kingdom there were court music traditions, where special instruments were included in the royal regalia.

In Uganda, several self-taught composers have performed with acclaimed choral works. Musician Evaristo Muyinda (1916–93) played a central role in Uganda’s music life, including as a member of the national dance troupe Heart Beat of Africa (founded in 1969).

Popular music during the 1960’s and 1970’s mixed impulses from West African highlife and Congo and Swahili pop with indigenous traditional elements. The chaos under Idi Amin’s rule caused many musicians to flee abroad. One of the groups that has dominated the music scene since the situation began to stabilize again in the mid-1980’s is the Afrigo Band. Several of the band members have gone on to successful solo careers, e.g. Rachel Magoola.

One of the country’s biggest stars, Philly Lutaaya (1951–89), lived for a few years in the 1980’s in Sweden, where he recorded the successful album “Born in Africa”. Best known internationally are exilugandians such as Geoffrey Oryema (born 1953) and Samite Mulondo.

Kadongo kamu is an important popular form of music with the roots of wandering troubadours. One of the genre’s best-known artists is Bernard Kabanda (1959-99), who was discovered while playing his homemade guitar at Kampala’s bars. Later practitioners, such as Paulo Kafeero (1970–2007), usually make use of musicians.

Musicians who perform traditional music still play a major role in society, not least in connection with celebrations such as weddings.