In Tunisia, Arabic-language literature flourished both before and after the country’s independence in 1956, while French-language literature had long held an obscure place. Until the 1970’s, Albert Memmi was the only major author in French. But interest in French literature began to grow among the young population as early as the late 1960’s, which was certainly due to the French language’s strong position in schooling. Poetry is today an important genre in French literature. Among the generation of poets who rose to independence are Hédi Bouraoui, Majid El Houssi, Tahar Bekri and Moncef Chachem. A recent poet who debuted is Aymen Hacen. The novel genre has also evolved since the 1970’s with names such as Mustapha Tlili, Abdelwahab Medded and Soad Guelloz. Mention may also be made of Claude Kayat, Born in Tunisia but since 1958 living in Sweden. the novels “Mohammed Cohen” (1981; “Mohammed Cohen: The Arab Jew”) and “Le Treizième disciples” (2002; “The Thirteenth Disciple”). 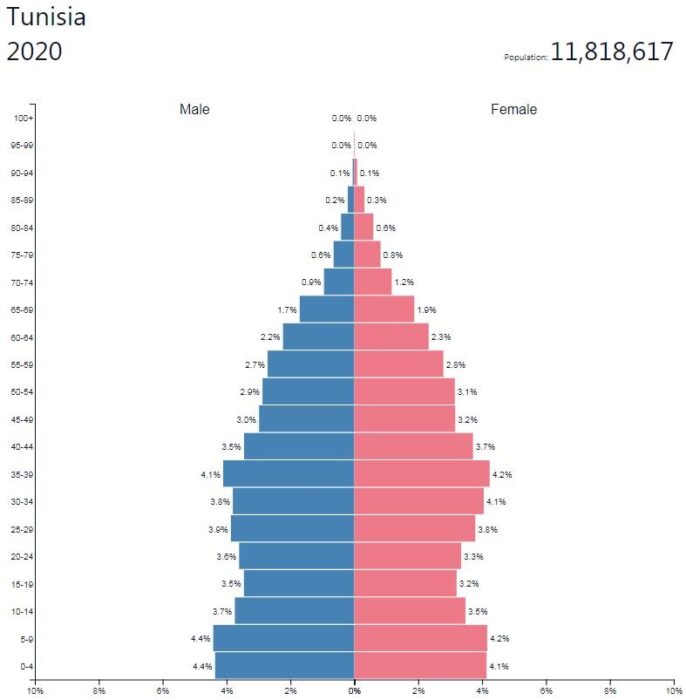 Tunisia has ancient literary traditions from the Arab-Islamic Middle Ages with Kairouan as the shining center. Ibn Khaldun is one of the great of Arabic culture. Of the writers of the 20th century, the romantic and nationalist Abu al-Qasim ash-Shabbi appear with their “Songs of Life” (not in Swedish translation) and “The will of the Nation” (not in Swedish translation); the latter is famous throughout the Arab world. The post-war generation belongs to Mahmud al-Masadi, a symbolist and surrealist within a classical Arabic framework. Before the 1960’s, however, the new literature lacked both popular support and the authorities’ approval. Izz ad-Din al-Madani, avant-garde dramatic writer with a.k.a. “The Epistle of Forgiveness” (not in Swedish translation), is considered one of the foremost during the second half of the 20th century. Recent proseists include Habib Selmi.

A well-developed film studio movement (founded in 1950) spurred the creation of its own film production in Tunisia. The first feature film was made in 1966, “L’Aube” by Omar Khlifi (born 1934). Despite investments in studios and laboratories, film production has remained small, due to lack of capital, small market and modest state film support. Active state censorship has also been a hindrance.

Since its inception in 1966, the Carthage Film Festival has been a central point of contact for the Afro-Arab films. Among the film directors who have tried to defy Egyptian dominance in cinemas since the 1980’s include Mahmoud Ben Mahmoud (born 1947), Nouri Bouzid (born 1945), Nacer Khemir (born 1948) and Ferid Boughedir (born 1944), who have achieved international success., first with “Halfaouine – behind the veil” (1990), then with “Summer in La Goulette” (1996).

Tunisia has several prominent female directors, including Moufida Tlatli (born 1947) with “The Silences of the Palace” (1994) and Selma Baccar (born 1945) with her “La Danse du feu” (1996), about Habiba M’Sika, famous singer and dancer. Among younger filmmakers is Nejib Belkadi (born 1972), who has done, among other things. the documentary “VHS Kahloucha” (2007).

The country has also been a popular recording spot for foreign productions, such as Monty Python’s “Life of Brian” (1979) and George Lucas’s “Star Wars” and “Indiana Jones” series.

The oldest Islamic art (600–800’s) was formed from both Late Antiquity and Byzantine as well as Eastern Islamic (Umayyad and Abbasid) traditions, e.g. in the decoration of the mosque in Kairouan (relief decoration, luster tile). From the oldest capitals of the Fatimids, Sabra al-Mansuriyya and Mahdia are preserved stucco and marble reliefs (900’s). During the Fatimids, a relief patterned, unglazed ceramics and glazed objects with geometric and figurative décor in a restrained color scale were also produced, mainly floor white, brown and green; manufacturing center was Raqqada. From the period there are also preserved smaller glass bottles and cups and metal lamps of metal. The oldest Qur’anic magazines with Arabic, North African calligraphy, so-called maghribi, can be dated to the 900-1000 century.

From the 18th century, a flourishing of the ceramic craftsmanship is marked with polychrome tiles and objects with plant and floral decor in strong colors on a white background. The popular tradition, mainly from the Berbers, has dominated the crafts in recent centuries with woven and knotted rugs (Qafsa, Banzart, Kairouan), fabrics, embroidery and jewelry of silver and gold, especially in filigree technology. The most significant collections of arts and crafts are in the Bardom Museum in Tunis.

Tunisia’s oldest Islamic architecture is characterized by pure and heavy forms in defense facilities and in the oldest mosques, with influences from both the Abbasid architecture in the east and the Umayyad architecture in Spain. The building materials were stone and bricks, often with architectural details such as columns and capitals, taken from Roman and Byzantine ruins. The oldest and most significant mosque is the Great Mosque or Sidi Uqba Mosque in Kairouan, founded in 670 but rebuilt 836 during the Aghlabid dynasty. It has a large, open rectangular courtyard with surrounding arcades, an expansive hypostyled prayer room with a richly decorated bean niche (mihrab) and an existing dome, and a distinctive, powerful, square minaret in three ledges for North Africa. The Mosque of Sfax (849),the ribāten, a defense facility with a mosque in Sousse (821) and al-Zaytuna mosque (856-63) in Tunis are built in the same tradition.

From the 11th century, a western influence (the almoravids and almohads) is noticed, especially in the use of the so-called horseshoe arch and the muks, the often purely decorative so-called stalactite vault, and from the middle of the 16th century an Ottoman influence, e.g. in interiors lined with polychrome patterned tile. The architecture of the 20th century is characterized by a Western, mainly French, influence but also by a renewal of traditional, local architectural forms.

Maqam principles (see maqam) characterize the city-grown music malouf, which was taken to Tunisia by Moors who fled from Andalusia in the 15th century when the Spanish monarchy conquered the area. By the end of the 19th century, Maluf, who was heavily influenced by Turkish music during the Ottoman period, had lost significance, but survived much thanks to the founding of the La Rachidia Music Institute in Tunis in 1935. In addition, there was extensive Western influence under the French protectorate. The original Andalusian nouba form (a set of modal and metric principles organized by instrument pieces, solosaws and unison choruses) was further developed by Ahmed El Wafi (1850-1921) and Khemaies Ternane (1894–1964). The latter was one of the founders of La Rachidia.

Malouf has traditionally been performed by small orchestras. The instrumentation is mainly the Arab-Islamic with lutan ud (in Tunisia a variant with four double strings), cittran qanun, drum darabukka and flute nay.

During the 20th century, larger orchestras with both Western and Arabic instruments began to perform malouf. After independence, music was used as a unifying factor with a strong national symbolic value.

One of the most important Tunisian musicians is Anouar Brahem (born 1957), who has developed the ud music and among other things. let himself be influenced by jazz. Other prominent singers and stage performers are Lotfi Bouchnak (born 1952) and Dhafer Youssef (born 1967). Two of the country’s most popular female artists are Latifa (actually Latifa Bint Alayah Al Arfaoui; born 1968) and Sonia M’Barek (born 1969).

A more modern sound represents the Checkpoint 303 group, whose electronic music is inspired by the ongoing conflicts in the Arab world.

The economy of Africa is marked by the exploitation of natural resources such as oil, gas and minerals such as gold and diamonds. The continent, however, is the poorest in the world, the result of colonial and neo-colonialist exploitation. Agriculture, tourism, manufacturing and services are still poorly practiced in most African nations. The same is true for the […]

Visa requirements Passport: is generally required for travel in Equatorial Guinea, the passport must be valid for at least 6 months. In addition, there must be a blank page in the passport. Visa: also generally required; only U.S. citizens are exempt for a maximum stay of 30 days. Here you can download the visa application […]