Togo was officially French-speaking at the independence of 1960 and the French had been a school language since the 1920’s. The native languages ​​were therefore difficult to assert as literary languages. From the beginning of the 1940’s, however, novels and plays were written on ewe. by Sam Obianim, Kwasi Fiawoo and Y. Seth Akafia. The foremost representative of French-speaking literature is Félix Couchoro; his “L’Esclave” (‘The Slave’, 1929) is usually regarded as the first French-language African novel.

Among Togolese writers born after independence are Sami Tchak, Kossi Efoui, Kangni Alem and Edem Awumey, all of whom write in French. The political situation in Togo has contributed to these and many other writers going into exile, mainly to France. 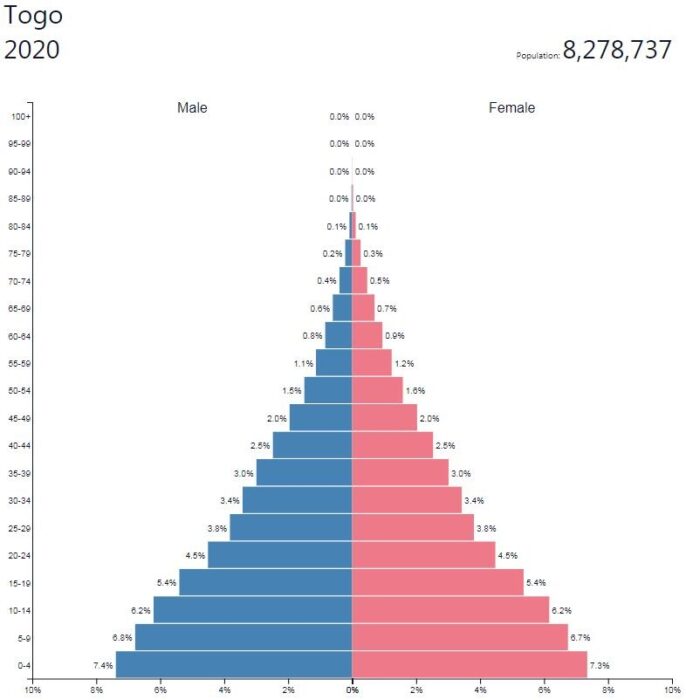 The arts and crafts in Togo relate stylistically to the arts and crafts in Ghana and Nigeria; e.g. the folk group Ewe’s colorful textiles show a clear connection with the textile tradition of the Ashanti culture in Ghana. Today, Togo’s textile production is dominated by machine-printed cotton fabrics with expressive designs. Several groups of people produce sculptures made of wood. Particularly prominent are the abstract depicting ancestral sculptures of the mob and gourmet cultures and the more naturalistically made sculptures of the Ewe culture. Moba and gourmet people, together with the kabyé and chamba people, also known for their carefully decorated gourds and for their ceramics. Among the contemporary artists in Togo who have received international recognition are Paul Ahyi, Nestor de Souza and Agbagli Kossi.

Togo exhibits a wealth of music traditions. The Kabre people in the north can be seen as representative with their connection to the agricultural cycle and their wide set of musical instruments, where a lithophone consisting of five stones is a distinctive feature. The dance group Ballets Africains du Togo (founded in 1967) has sought to convey some of Togo’s music and dance traditions to the outside world.

Popular music in Togo has suffered from the violent political situation that has largely influenced the country’s modern history. One of the most important artists is singer Bella Bellow (1945-73), who also achieved success abroad. Among her successors is Afia Mala, who has taken inspiration from, among other things. Cuba, and Fifi Rafiatou (born 1964). However, the position as the country’s most famous artist has been taken over by King Mensah (born 1971), who has achieved great success with music that mixes traditional influences with, among other things. funk and reggae. Mention can also be made of Jimi Hope (born 1956), who, in addition to music, is also active as a visual artist. The youngest fastest growing genre is hip hop.