The rebellion in Egypt 2011–2012 was a popular, nonviolent rebellion directed at the sitting regime in Egypt from January 2011. The rebellion was part of the Arab Spring. It was aimed at the regime led by President Muhammad Hosni Mubarak, demanding democratic reform, and that the president had to step down – which he did on February 11, 2011.

The revolt was extensive and initially nonviolent, but was met by force. During an aftermath in the summer of 2013, the Egyptian army intervened and deposed President Mohamed Morsi, about a year after he was elected. Provision was made following great popular mobilization against Morsi. 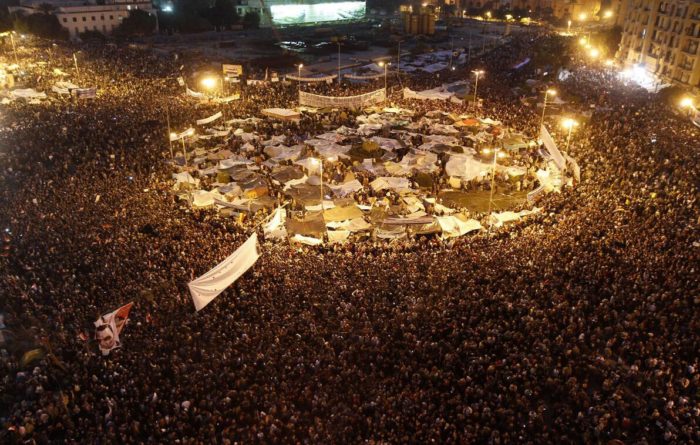 Hundreds of thousands of protesters gathered at Cairo’s Tahrir Square on February 8, 2011 in the largest of protests since the rebellion against President Hosni Mubarak began in 2011. Mubarak was forced to step down as president few days later, February 11, 2011.

The rebellion in Egypt erupted in response to decades of authoritarian rule, with state of emergency and abuse of power, with demands for democratization and for President Mubarak to step down. It was inspired by the rebellion in Tunisia, which started in December 2010, but had its own Egyptian background and agenda. Opposition to the Mubarak regime had built up throughout the 2000s, and young activists had for several years been trained in nonviolent actions and the use of modern means of communication, especially social media – which were widely used during the uprising.

It is stated that 846 people lost their lives during the uprising; over 6,000 were injured.

The uprising manifested itself in extensive demonstrations in many places in Egypt from January 25, 2011, culminating in Mubarak’s departure on February 11. The subsequent political process led to democratization, with a series of elections from November 28 leading to free elections and the inauguration of President Mohamed Morsi in June 2012. There were also extensive demonstrations and violence by the authorities following Mubarak’s departure.

Violence also came from regime opponents, including in the form of attacks on churches by radical Muslims, as well as the ignition of police stations as well as the Interior Ministry. The absence of police in the streets at times led to widespread crime, and civil protection was established in many neighborhoods.

The demonstrations were held in all major cities, with Cairo, Suez and Alexandria as three centers of power. The largest event took place at Cairo Tahrir Square, where large crowds gathered in late January. The first mass mustering took place on January 25. Thereafter, new demonstrations were held every Friday, while Tahrir Square was occasionally occupied by activists. The government’s introduction of a curfew did not prevent large crowds, up to one million in Cairo, from participating in the protests.

The demand for the protesters was first and foremost that political reforms, including the lifting of the state of emergency, and that President Mubarak and his government had to step down and be replaced by a democratically elected regime. It was also demanded that plans for the president’s son Gamal Mubarak to take over after the father were laid. The protests also targeted political assaults and corruption, as well as police brutality.

In an effort to regain control and retain power, President Mubarak made several concessions. Among other things, he dismissed the government and inmate February 10 Omar Suleiman, a former intelligence chief, as vice president; Former Air Defense Chief Ahmed Shafik formed a new government. At the same time, Mubarak announced that he would not run for re-election.

These measures did not meet the demands for genuine reform, and the pressure on Mubarak persisted – until February 11, he was announced as head of state. At the same time, the power was conferred on a military council (Supreme Council of the Armed Forces, SCAF), led by Field Marshal Mohamad Hussein Tantawi. The council repealed the constitution and dissolved parliament, declaring it would hold power – with Tantawi as de facto head of state – for elections to be held.

In the fall of 2011 new demonstrations came, with new clashes with security forces. The transitional government asked SCAF to resign, which happened on November 22. A ‘reconciliation government’ was then established until elections were held. Former Prime Minister Kamal Ganzouri was appointed prime minister and head of the new government on November 24. Subsequently, elections at the National Assembly were initiated.

The new demonstrations reflected the discontent with the new military regime and the impatience associated with the pace of democratization. The turmoil in November coincided with the start of the election campaign against a tedious process until a new constitution and new parliament. The actual construction of the process was also a source of resistance: a complicated process with many rounds that many had difficulty understanding, and was interpreted as a way the new regime wanted to manipulate development.

The criticism of the regime that took over after Mubarak, among other things, was that while thousands were sentenced to prison sentences for participating in the rebellion, few members of the deposed regime – including those responsible for the killings during the rebellion – were brought to justice. Demonstrations in October were held in protest of the government’s perceived failure to follow up on repeated attacks against the country’s Christian minority, the Copts.

Tensions in Egyptian society persisted after the uprising and elections, with new demonstrations in both 2012 and 2013 (see bottom of article).

The causes of the Egyptian uprising are complex, both political and economic. The political dimension consisted essentially in the absence of democracy – with full freedom of organization and expression, and free elections, as well as a sustained authoritarian rule led by the same man for 30 years, and fears that Mubarak would introduce a dynasty to place his son as successor.

The rebellion was also aimed at the protracted state of emergency, which allowed for the detention of political opponents, and the widespread use of torture. At the same time, the political climate was affected by parallel mobilization for regime change in other Arab countries, especially Tunisia. The economic dimension is characterized by increasing poverty and difficult living conditions, which were further strengthened by the high and growing unemployment rate, especially among young people – and especially among young people with higher education. The dissatisfaction with the sitting regime was also directed at perceived abuse of power, including corruption.

The Egyptian uprising was in one way spontaneous – in that it erupted when it did. At the same time, it followed previous actions, including several strikes – and it was based on a built-up resistance to the ruling regime. Ever since the riots in 1977, there were several protest movements in Egypt, and their experiences contributed to the rebellion in 2011 – and had helped to overcome the fear of rebellion.

Youth played an important role in mobilizing participation, not least through the use of social media, and through the April 6 movement, formed as an activist group in support of strikes in 2008.

As in Tunisia, the trade union movement in Egypt participated in the uprising. A number of organizations, parties and personalities joined the demonstrations, including Nobel laureate Mohamed ElBaradei. The police killing of a young internet cafe user, Khaled Said in 2010, triggered an extensive campaign on Facebook. The incident served to raise political awareness of young Egyptians, and to use the Internet as an important mobilizing tool during the uprising in 2011. People and organizations with different political and religious views first joined in the uprising. Eventually, however, there were contradictions, among other things, between Christians and Islamists, and between the latter (Salafists) and other parts of the rebels. The Salafists demonstrated for an Islamist order.

While the security and military police were deployed against the protesters, the army remained largely passive, but in effect seized power in the vacuum after Mubarak’s departure – and was subsequently deployed. The regime’s use of military force against protesters in the fall of 2011 weakened the bond between the population and the army from the winter and the spring rebellion as the army retreated.

The Egyptian rebellion removed an autocratic head of state, Muhammad Hosni Mubarak, and abolished the state of emergency that, with a brief break, had been in effect since 1967. The rebellion eventually did not change the regime itself, which was in practice continued by other people – and not least by the military structure, which in Egypt is close to state power. However, the rebellion eventually led to a democratization process of free elections from 2012.

The tension between supporters and opponents of the new leadership, and in particular the elected President Mohamed Morsi, intensified in the winter of 2012/2013, with new protests and demonstrations, especially in the summer of 2013. Quite exactly one year after Morsi was elected Egypt’s first democratically elected president, he was deposed by the country’s military leadership and placed under house arrest.

Opponents of the new government and the Muslim Brotherhood opposed a development they felt was not in line with the demands of freedom and democracy during the revolution, but that the new leadership, rather than democratize, helped Islamize Egypt by replacing people in important positions with their own supporters. A new movement, Tamarod (“Rebellion”), mobilized through social media, claiming to have collected 22 million signatures in support of the claim that Morsi had to step down.

With increased excitement, as the Brotherhood also mobilized for demonstrations, the military force, represented by Defense Chief Abdel Fattah al-Sisi, offered ultimatum to Morsi, who, however, refused to step down. On July 3, 2013, he was detained by the military and placed under house arrest. The military intervention was considered by many to be a military coup, while others believed it was a change of power encouraged by the military, and not an actual military coup, as the military itself did not retain the formal power, but immediately deployed a new civilian president; the chief of the country’s Constitutional Court, Adli Mansour.

Nevertheless, undemocratic change of power was welcomed by many Egyptians and condemned by Morsi’s supporters – while both Egypt and abroad expressed concern for the development, including fears that radical Islamists would seize weapons and that Egypt could become thrown into a major spiral of violence in which the opponents and supporters of the deposed president are increasingly irreconcilable. 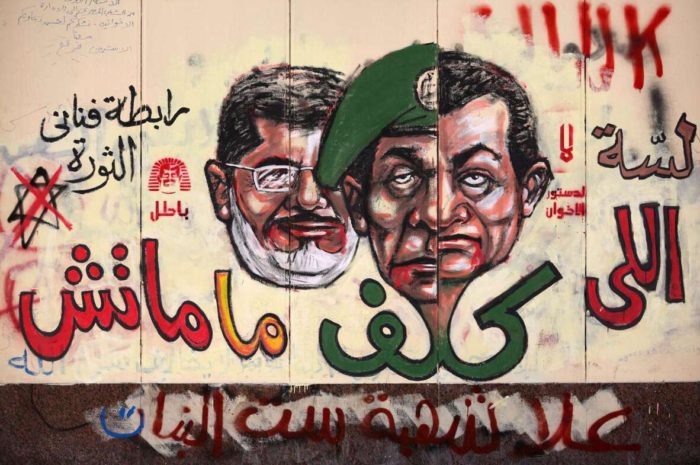