The Egyptian Death Book, or “The Day to Go Out in the Day,” as the Egyptians called it, was a collection of texts and associated images (vignettes) used in private graves in Ancient Egypt from the New Kingdom (c. 1550–1069 BCE). ) to Greco-Roman times (332 BCE – 395 BCE). The texts were to protect and help the dead in the hereafter and on the journey through the underworld.

The tradition of letting the dead bring a text collection in the tomb goes back to the Pyramid texts that were carved into the royal tombs of the pyramids. The pyramid texts are first attested from the tomb of King Wenis (c. 2321-2306 BCE). 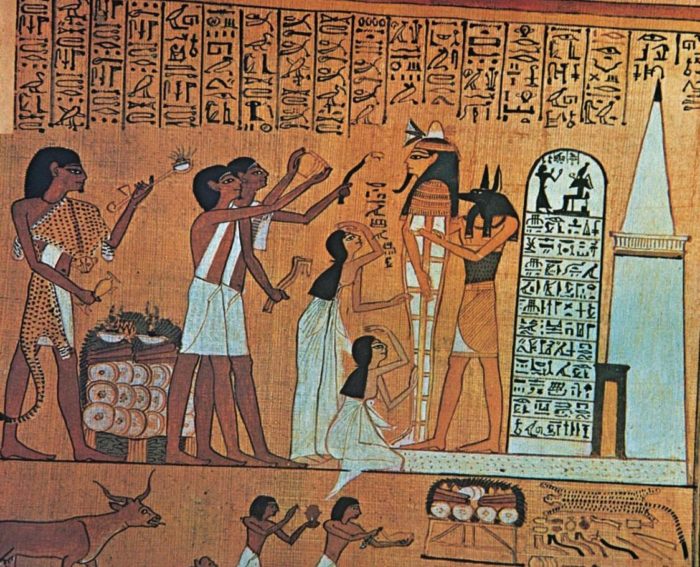 Vignette from the Death Book showing the so-called mouth-opening ceremony, a symbolic revival of the mummy. The god Anubis (with jackal head) stands on the right side of the mummy. On the other side of the mummy, priests perform the ritual. The picture is from Hunefer’s papyrus.

Much of the same material was left in the Coffin texts that were written inside the coffins in private tombs in the Middle Kingdom (circa 1980–1760 BCE). The obituary represents a third revision of this corpus. Although many texts have been added and others subtracted over the centuries, most chapters in the death book can be traced back to the Coffin texts. Some can be traced all the way back to the Pyramid texts.

The contents of the death book

The Death Book is not a book in the modern sense of the word, but a collection of texts consisting of 192 more or less independent chapters. The texts can be characterized as prayers, hymns or ritual texts, and include a variety of themes related to death and afterlife.

Some chapters are about protecting the mummy and the body’s integrity and functionality in the hereafter. Others are about the obstacles and transformations the dead will be exposed to on their journey through the underworld, and to the final condemnation that awaits in the throne room of Osiris, the king of the underworld. The Book of the Dead gives detailed descriptions of the geography of the underworld and how to conceive of the Blessed Life as a state of freedom in association with gods and ancestors.

The death book and the tomb equipment

The obituary was a permanent element in the burial equipment of elite burials in the new realm, most characteristic of a selection of chapters written on a papyrus scroll. The papyrus could be stored in a special container shaped like a god, or it could be folded over the dead inside the coffin.

One of the most complete death books found was Ani, a royal writer who lived in the 19th Dynasty (c. 1292–1191 BCE). In unrolled condition, Anis papyrus was almost 24 meters long, covered with hieroglyphic texts and colorful vignettes. The papyrus is currently on display in The British Museum in London, divided into 37 sheets. Anis papyrus is published in book form and can also be studied on the British Museum’s database online.

Chapters from the death book, with or without the vignettes, also figured elsewhere in the burial equipment, such as on amulets, in the coffin decorations, on the corpse and so on. Later in the new kingdom, the Death Book could also be depicted in murals inside the tomb, and was also used in the royal tomb equipment. For example, several chapters from the Book of the Dead are used in the decorations on the coffins and sarcophagi of the King Tutankhamon.