At the 2012 presidential election, Mohamed Morsi of the Brotherhood received 51.7 percent of the votes in the second and decisive round. This despite the fact that the Brotherhood had previously promised not to stand with a separate candidate, thus avoiding monopolization of power. Morsi was appointed president on June 30.

The new regime relied on Islamist groups, especially the Brotherhood. Under Morsi’s rule, political opposition in Egypt increased, with a polarization between Islamist groups that supported Morsi and more secularly oriented groups, some with ties to the old regime, which soon targeted him. 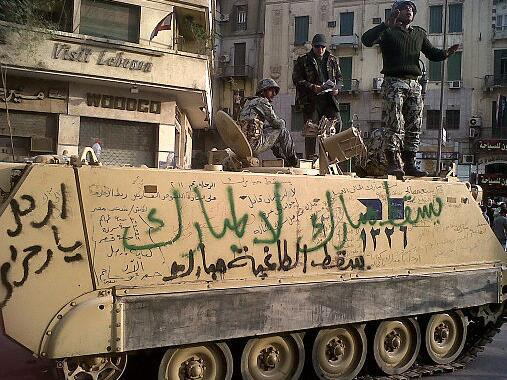 Keywords directed at President Mubarak during the Egyptian Revolution of 2011.

A particularly critical point was the preparation of a new constitution. This was written by a committee set up by the National Assembly, which was dominated by Islamists. The opposition, primarily made up of more secularly oriented groups, did not think this reflected Egyptian society. In November 2012, Morsi then issued a decree intended to ensure that a new constitution was passed, which was also passed, and this was subsequently approved in a referendum. However, the decree also gave Morsi very broad powers, which the president defended as a necessity to prevent the military from interfering in the process. However, the opposition claimed that the democratic ideals of the 2011 revolution were now undermined by a new authoritarian regime. The dissatisfaction with Morsis and the Brotherhood’s board led to new demonstrations in the spring of 2013. At the same time, supporters of Morsi’s held support demonstrations. There was a clash between the parties, with many killed and injured as a result.

In the summer of 2013 very extensive demonstrations were held with demands for Morsi’s departure, which large parts of the opposition joined. However, President Morsi rejected all such claims, despite receiving support from the country’s military leadership, including Defense Minister Abdel Fattah al-Sisi. Morsi was then deposed by the military leadership in a coup on July 3, 2013 and placed under house arrest. Morsi remained imprisoned until his death in 2019. Egyptian Constitutional Court leader Adli Mansour, was inaugurated as new president. Supporters of Morsi conducted a series of protests in support of the deposed president, demanding that he be reinstated. However, this did not allow the new rulers, and in August security forces attacked the protesters, who had set up protest camps at Rabaa al-adawiya square and al-Nahda square in Cairo. It is unclear how many were killed, but a normal estimate is around one thousand. Those responsible for the massacre are not on trial. In 2018, a new law was passed, which bans the investigation of senior officers for actions performed in official capacity following the coup in 2013 and up to 2016. Members of the security forces also killed 51 protesters in July 2013.

In December 2013, the new government declared the Brotherhood to be a terrorist organization. In January 2014, a new constitution was passed in a referendum. This prohibited parties based on religion. After this, a number of members of the Brotherhood have been arrested and many have been tried, several hundred of whom have been sentenced to death. In August 2014, a court issued a ruling banning the Brotherhood’s political branch FJP. The new regime also cuts down on other forms of opposition, arresting thousands of activists from more secularly oriented groups. In November 2013, the government passed a law that in practice bans all opposition protests.

This intervention in the political process is considered a military coup, and a regime based in the military took over in practice, even though, at first, a civilian president was formally appointed. At the same time, it is clear that the military leadership also had considerable popular support for its intervention. Morsi’s rule was unpopular, and many believed that the ideals and gains of the revolution were betrayed. Equally, the coup marks the end of the experimental transition to more democratic rule in Egypt.

After formally stepping out of the military ranks, General Sisi was elected new president in 2014, with 96.9 percent of the vote in the second round. He thus strengthened his own and the military leadership’s political control. Like several other authoritarian leaders in the region, Sisi has increasingly sought legitimacy by playing on nationalism and security. The regime has pursued an even clearer anti-Islamist policy than was the case under Mubarak, which has particularly affected members and supporters of the Muslim Brotherhood, with mass arrests and numerous death sentences. At the same time, not only Islamists have been suppressed, and Sisi’s political strategy has been to stop all forms of opposition. To achieve this, he has increasingly violated human rights, and there is broad consensus that the situation in Egypt is now far worse than under Mubarak’s rule.

The Muslim Brotherhood has branches in most Arab countries, and several regimes share Sisi’s desire to fight the organization. This applies not least to the authorities of Saudi Arabia and the United Arab Emirates, which, like Egypt, have declared brotherhood as a terrorist organization. Both countries are close allies of Egypt under Sisi, and gave clear support to the military takeover in 2013. Egypt, along with Saudi Arabia, the Emirates and Bahrain, take part in the self-titled “anti-terror quartet” which in June 2017 broke all diplomatic ties with Qatar, and in practice introduced a blockade of the country. The fight against Islamism has also been heard in the United States. Furthermore, Egypt under Sisi has given tacit support to Bashar al-Assad regime during the war in Syria. However, the country’s traditional role as the main player in the region is clearly weakened.

In line with nationally oriented politics and rhetoric, President Sisi directly criticized the uprising in 2011 for the first time in 2011. It was, in his view, an understandable but dangerous attempt at change, with a subsequent chaos that threatened the existence of the Egyptian nation. Sisi’s policies, with actions aimed specifically at Islamists, in response to developments in other countries that were the scene of the uprising during the Arab Spring and where the state has collapsed: Yemen, Libya and Syria.

A new National Assembly was elected in the fall of 2015 and met in January 2016. The composition was radically changed compared to the previous National Assembly dissolved in 2012: Supporters of President Sisi gained a majority, while the Salafist Party al-Nour declined sharply. The largest party was the liberal Hizb al-Masriyin al-Ahrar (Free Egyptian Party – FEP). The forbidden Brotherhood was not allowed to stand. Of a total of 596 representatives, 120 were elected through parties, 448 as independent; 28 was appointed by the President.

In 2018, Sisi was re-elected with 97.1 percent of the vote. In the end, one other candidate stood up, but this was a person who declared himself a supporter of Sisi. Other candidates were discouraged, arrested, or withdrawn as a result of threats. Sisi’s campaign portrayed him, among other things, as the man who had restored security and stability in Egypt.