A large-scale activist movement emerged in Egypt in the 21st century. After first mobilizing around international issues, such as the Palestinian intifada and opposition to the Iraq war, the focus was gradually on domestic issues. From 2004, the movement named Kifaya (“Enough!”) Organized demonstrations demanding Mubarak’s departure and democratic reforms. The restrictions on organizational life and politics described above made activists choose to organize themselves outside the official channels. The rise of the internet, albeit limited, made it easier for activists to organize the work and to discuss relatively freely, and in combination with satellite TV and some private newspapers, broke the authorities’ previously strong control over the news picture. Prominent activists from this period were also central to the planning of the first protests during the 2011 uprising.

During the same period, the number of strikes and workers’ actions in Egypt also increased dramatically. Again, the authorities’ control over the formal organizational life meant that they went outside the official channels and created ad hoc strike committees and eventually new and independent unions. The action increased after Mubarak appointed a new government in 2004 that accelerated the privatization of state-owned companies. 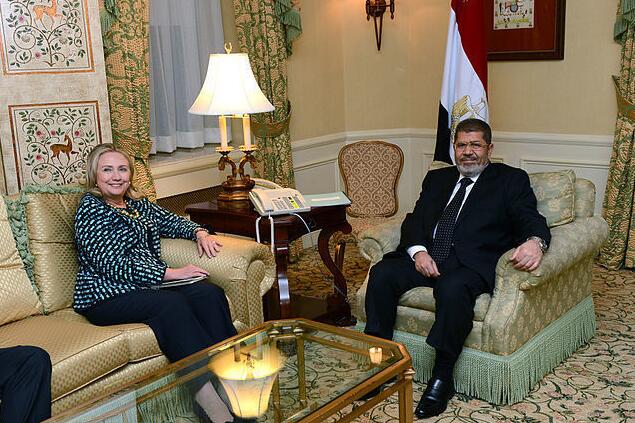 Egypt’s President Mohamed Morsi meets with US Secretary of State Hilary Clinton, in New York, in the fall of 2012.

Prolonged dissatisfaction with the Mubarak regime, enhanced by inspiration from the Tunisia popular uprising that started the Arab Spring, led in January-February 2011 to mass mobilization and demands for Mubarak’s departure, regime change and democratization. The uprising took place with very extensive demonstrations across Egypt from January 25, 2011, culminating in Mubarak leaving on February 11 of that year. Then began a process aimed at introducing a more democratic government, with a new constitution and political leaders elected through free elections.

The popular uprising, also referred to as a revolution, was nonviolent, based on broad mobilization for demonstrations and with demands for political reform. It was demonstrated in all major cities, with Alexandria, Suez and Cairo as major center of gravity. The largest demonstrations took place at Independence Square ( Midan Tahrir) in Cairo, where large crowds gathered and gradually took control of the area. Despite the nonviolence line, and the fact that the army was initially passive, it was the practice of violence, first and foremost by the fact that security forces sought to remove protesters, but also through crime, which was partly due to smaller police in the streets. Around 850 people were killed as a result of violence against protesters.

The rebels demanded quickly that President Mubarak and his government have to step down and that Egypt should have a democratically elected regime. Dignity, social justice and freedom from oppression were other key requirements. In an effort to regain control and retain power, Mubarak dismissed the government, and inducted former intelligence chief Omar Suleiman as vice president. At the same time, Mubarak announced that he would not stand for the next election. These measures did not meet the demands for genuine reform, and the pressure on Mubarak persisted – until Vice President Suleiman announced on February 11 that he resigned. The top council of the armed forces ( the Supreme Council of the Armed Forces, SCAF), headed by Field Marshal Mohamed Hussein Tantawi, took over power. The council repealed the constitution and dissolved parliament, declaring that SCAF would sit in power – with Tantawi as the de facto head of state – for elections to be held. Thus, several have pointed out that it was the army that deposed Mubarak in practice, but his departure came as a direct consequence of the protests.

Ever since the 1952 revolution, the military has held a strong position in Egypt. General Mubarak took over when General Anwar al-Sadat was killed in 1981; Sadat himself had succeeded the leader of the revolution and Officer Gamal Abdel Nasser at his death in 1970. Although Mubarak had been elected civilian president, the ties to the military were tight, as was demonstrated by the transfer of power in the winter of 2011. For the popular movement fighting for a real regime change however, it was unacceptable that the military leadership still retained power.

Former President Mubarak was arrested after the revolution and charged with contributing to the killing of hundreds of protesters, but in March 2017 was acquitted and released.

In principle, the resignation of President Mubarak in 2011 did not mean that all protests came to an end, and continuous demonstrations took place against the new military rulers who had assumed control pending elections. The demonstrations reflected dissatisfaction with the military regime and impatience with the pace of democratization. At the same time, there were others, including the Muslim Brotherhood, who believed that peace was needed now and who cooperated with the military transitional regime. The broad coalition behind the rebellion was thus split early. In March 2011, the authorities held a referendum on a temporary constitution that would form the basis for parliamentary and presidential elections, and this was passed by an overwhelming margin. However, the protests continued throughout the fall of 2011, and the elections took place against a troubled background.

At the election of a new national assembly in the fall of 2011, Islamist parties gained a clear majority. The Muslim Brotherhood was the biggest: Its Freedom and Justice Party ( Hizb al-hurriya wa-l-adala – FJP) won 47 percent of the seats. Second largest was the more conservative Salafist party al-Nour (“The Light”) with 24.4 percent; the majority of the remaining seats went to liberal and more secularly oriented parties. At the same time, elections were held for the National Assembly’s second chamber, the upper house, and here Islamist parties won nearly 90 percent of the seats. The upper house probably had very limited authority.