Inspired by Arabic poetry, even before the colonial era, developed poetry appeared in Swahili, the largest and most important language in eastern Africa, and later official language in Tanzania. From the 1940’s, Shaaban Robert (1909–62) was perhaps the foremost author of Tanganyika, primarily through his poetry, a selection of which is featured in “Diamonds of Africa” ​​(1960) in Swahili translation by the author himself. One of the first to describe modern Tanzania in Swahili was the poet writer Muhammed Said Abdulla (1918–91) born in East Africa. Despite a large production of prose in Swahili since the 1960’s, very little has been translated into Western languages. The same goes for the drama, in which Ebrahim Hussein (born 1943)) is a central figure. 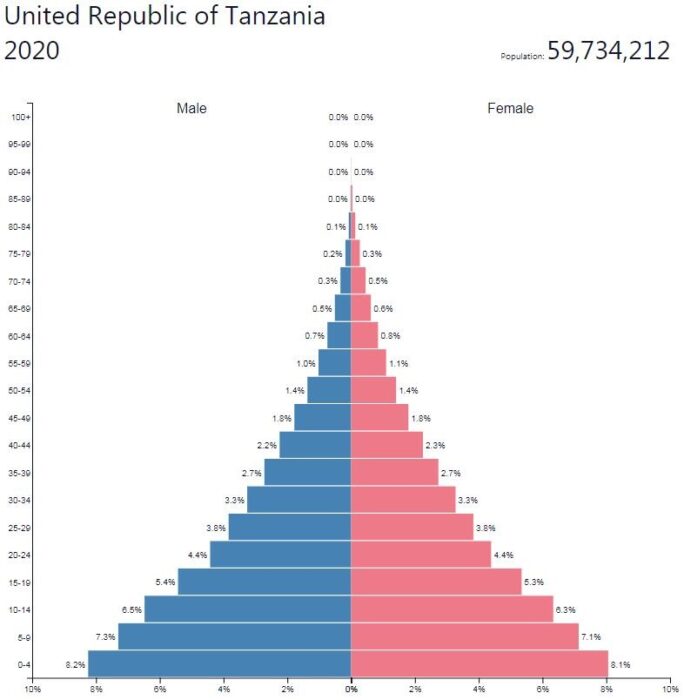 The first Tanzanian novel in English, “Dying in the Sun” (1968), was written by Peter Palangyo (1939-93). The writings of the country’s first president Julius Nyerees have also been of great importance. Recent writers writing in English include Abdulrazak Gurnah (born 1948). Elieshi Lema (born 1949), who mainly wrote children’s literature in Swahili, had a major breakthrough with the adult novel “Parched Earth” (2001; “Burnt Earth”).

A work in many ways unique is “Myombekere na Bugonoka na Ntulanalwo na Bulihwali” (“The Rainmaker’s Child”), a novel by Aniceti Kitereza (1896-1981), completed in 1945 in the author’s native language, Kikerewe, which describes traditional everyday life on the island of Ukerewe in Lake Victoria.. The book, whose title is literally translated “Mr. Myombekere and Mrs. Bugonoka and Ntulanalwo and Bulihwali”, was first published in 1981 since Kitereza himself translated it into Swahili. The Swedish edition is the first of two parts of the more than a thousand-page work.

The coastal cities’ traditional architecture is similar to that of the Arabian Peninsula. The houses are built of coral stone in several floors with courtyard. Due to the humid climate, light palm leaf huts are built on the flat roofs so that the sea breeze can be enjoyed even in the middle of the day. The rectangular architecture has also affected the coastal population’s simple houses in the countryside. Clay clay is used as wall material, reinforced with crushed coral stone. The houses are covered with palm leaf roofs. In the rest of the country, the population has adapted their housing to living habits and available building materials. In the highlands around Kilimanjaro, the Chaga people build their houses as round beehives covered with banana leaves. On the dry plain around Dodoma, the Gogo people erect houses with heavy, flat clay roofs to protect themselves from the burning midday sun.

Tanzania’s coastal country has a diverse music culture, where the influence of Indian and Arabic music is felt in eg. singing styles and choice of instruments such as lutan udi (from the arabian ud). However, in the middle coastal area live unaffected music traditions, where drums and xylophones dominate.

In central Tanzania, music is usually a combination of song and instrumental music, characterized by pentatonics and instrument sets of drums, lemons, fiddles, bells, lamellaphones, horns and flutes. Large hourglass drums worn by women are featured in the ngoma dance, which is part of the annual dance festivals that once drew thousands of participants.

In the northwest, the influence of Uganda, Rwanda and Burundi is felt, among other things. in the use of trough citra (inanga) and gourd trumpet. In southern Tanzania, the music is characterized by singing in parallel blocks and quarters to the drums alongside fiddles, lamella and xylophones.

From the 1930’s, dance music (Swahili muziki wa dansi) dominated by soukous, the Congolese form of rumba. In the socialist state that was formed after independence, most bands were affiliated with some state organization, including the Nuta Jazz Band, which subsequently changed its name to the Ottu Jazz Band because the union organization supporting the band changed its name. Most often the instruments were owned by the organizations and the musicians received regular salaries. This system was broken in the 1990’s. Other popular bands from the 1960’s onwards are the Vijana Jazz Band, which was among the first to use synthesizers, and the DDC Mlimani Park Orchestra. A somewhat quieter variant of the Congolese sound became popular in the 1970’s with groups such as Orchestra Maquis Original and Orchestra Safari Sound. Mention can also be made of Remmy Ongala (born 1947) and his band Orchestra Super Matimila.

Influenced by hip-hop, the local bongo flava variant of the 1990’s has grown strong with texts in Swahili that address societal problems. Among the leading artists are SUGU (really Joseph Mbilinyi; born 1972), Juma Nature (really Juma Kassim Ally; born 1980), and the Gangwe Mobb and X-Plastaz groups.

Another genre, which originated in Dar es-Salaam’s poorer neighborhood, is mchiriku, which is usually performed on the street with keyboards and four drums of various sizes.

In the coastal areas, especially in Zanzibar, taarab, music with lyrics in Swahili and with Islamic roots, is an important genre. The most famous artist is the singer Siti bint Saad (1880-1950). In the 1960’s, the style of the Black Star Musical Club was modernized and the taarab gained greater geographical distribution. Today’s representatives include East African Melody and Zanzibar Stars Modern Taarab.