Like in i.a. Liberia and the Ivory Coast play an important role in the secret societies in society, and much of the traditional arts and crafts are linked to them. Particularly well known is the female company sandes black colored helmet mask in wood. But even the male company poros many different masks made of e.g. Wood, leather and fabric are prominent. In Sierra Leone there is an older sculptural tradition whose origins are still being debated. Characteristic of this tradition are the anthropomorphic steatite sculptures, nomoli, which the folk group now mean to use in various ceremonial contexts. 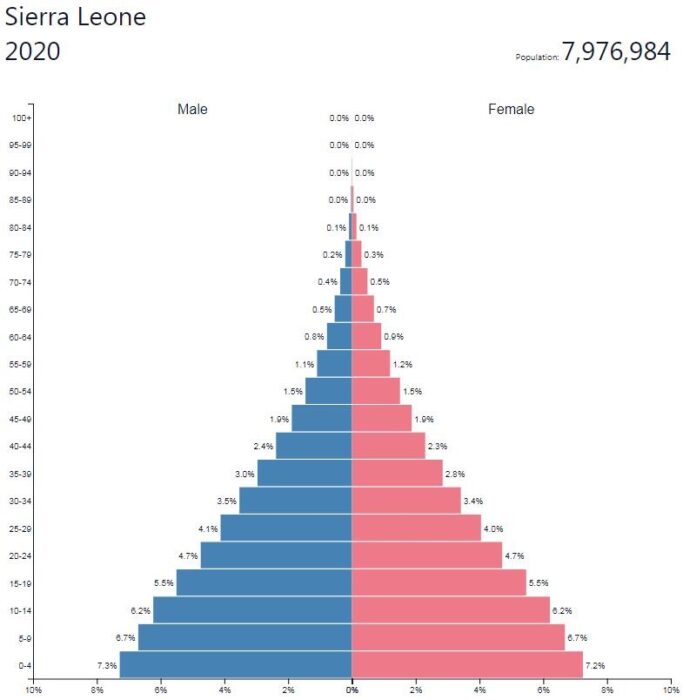 Today, the Islamic influence is considerable, and this is reflected in the traditional arts and crafts, which in turn are important sources of inspiration for contemporary artists, such as Chernor Bah and Osman Sankoh.

Sierra Leone’s varied music life is related to the many ethnic groups and their mutual exchange of music. Much of the music is produced within the societies that take care of the young people’s initiation into society; singing and instrumental music is performed especially in connection with various dance festivals. A common genre of music is the tribute song performed by wandering musicians. The instrument portfolio includes: two lamellophone types, xylophone, one- and two-leather drum, wear drum, rattle, horn, flute, musical bow, single-string fiddle, harp and chorus.

Early popular music was heavily influenced by calypso, which freed slaves from the Caribbean brought with them. The most important genre at the time of independence was the so-called palm wine music, also known as meringue. The style’s earliest and largest stars include Ebenezer Calendar (1912-85) and his Maringar Band, which recorded several hit songs in the 1950’s and 1960’s, including “Double Decker Bus”.

Ur gumbe, most associated with Guinea-Bissau, developed in Sierra Leone the acoustic music style milo-jazz, which got its name after the mark on the cans of chocolate powder filled with pebbles used as rhythm instruments. Milo-jazz retained its popularity throughout the 1990’s, but disappeared more or less during the Civil War.

The country’s musical golden age was in the 1970’s. Influences were derived from other African countries, e.g. Congo (then Zaire) and Ghana, and from Western music. Electric guitars and western wind instruments complemented traditional instruments. Among the most well-known groups of this time are the Afro-Nationals, Orchestra Muyah and Super Combo, all of whom were developing the style called soca-beat. Also important was Geraldo Pino (1939–2008), who was one of those who introduced James Brown’s big band funk in Africa and thus inspired, among other things. Nigerian Fela Anikulapo Kuti, the man behind the Afro-beat.

One of the few musicians from Sierra Leone who achieved international reputation is SE Rogie (1926–94), who played a type of palm wine music but with electric guitar instead of the usual acoustic guitar. Rogie is typical in that he has been active abroad for almost 20 years. Other musicians who have achieved success in exile are Abdul Tee-Jay (born 1956), percussionist Ansumana Bangura and King Masco. At home, Great Steady Bongo (really Lansana Sheriff; born 1966) has had great success with albums like “Ar De Make” (2001).

The prolonged civil war was devastating for the music industry. Since it came to an end, American and Jamaican music has had a great influence on eg. Jimmy B. (really Jimmy Bangura), Sisters With Attitude and Ahmed Janka Nabay, who also plays a modern version of the traditional music style bubu. The youth’s frustration over the situation in the country has been given musical expression in rapped songs such as “Corruption ‘E Do So'” by Daddy Saj (actually Joseph Cole; born 1978).