Visa: You do not have to apply for a visa. A residence permit for up to one month is issued upon arrival at the border if a return ticket is presented and a hotel booking and sufficient funds (approximately US $ 150 per day, proof can be provided in the form of cash, credit cards or travelers checks) Duration of stay can be provided. This visitor’s permit can be extended for another three months to one year. In the case of one of these extensions, proof of the corresponding funds for the extended stay and the presentation of a return ticket are also required.

Transit: Transit travelers must have a ticket for the onward journey and reserved seats on the plane.

Entry with pets:
The transportation of animals requires an import permit from the Director General (Animal Health Division, MENR, PO Box 166, Victoria, Mahe) in the Seychelles as well as a 14 to 30-day quarantine period for dogs and cats from rabies-free countries.
Birds may not be imported. This does not apply to gray parrots that have belonged to their owner for at least one year.

Currency exchange: Currency management prevails in the Seychelles. The exchange of foreign currency may only take place at authorized agencies (banks, hotels, etc.). Tourists have to pay almost all bills (excursions, overnight stays, meals, rental cars, dives, boat charter, ferry or plane tickets, excursions and entrance fees) in foreign currency. Other costs such as taxis can be paid in local currency.
We therefore recommend that you take enough cash with you in foreign currency (euros or US dollars), since cash is only paid to ATMs, for example by credit card, in the local currency. Major credit cards and traveler’s checks are accepted by larger companies, but smaller companies or tour operators are increasingly demanding cash in foreign currency.
In order to be able to exchange rupees back in foreign currency on departure, the original exchange receipts must be presented by the bank or the authorized exchange office. Banks may accept a maximum of 800 SR per passenger and only upon presentation of the exchange receipt and the valid boarding card. A return is not possible without a receipt.

Credit Cards: The Visa card is the most common, but others are usually accepted by car rental companies and better hotels. ATMs are located in the larger banks on Mahé, Praslin and La Digue. Here you can only receive cash in local currency.

From late 2005 to mid-2006 there was an epidemic-like chikungunya fever in the area of ​​the western Indian Ocean. This febrile viral disease is transmitted by mosquitos, is not transferable from person to person and can lead to long-lasting persistent bone and joint pain, usually without fatal outcome. After this Chikungunya epidemic has since subsided, individual cases can be observed again at the beginning of the rainy season. Travelers should pay special attention to the protection against mosquito bites (long clothes, repellents, impregnated mosquito nets, etc.) as the only prophylactic measure. There is no vaccination. Sick or pregnant travelers to these areas should seek medical advice before leaving.

The health service of the Federal Foreign Office also recommends vaccination protection against tetanus, diphtheria (primarily triple combination with polio) and hepatitis A, and for long-term stays of more than 4 weeks also against hepatitis B and, if there are special risks, typhoid.

The Seychelles are malaria free.

The numbers for HIV / AIDS are increasing, but the Seychelles have a low prevalence (approx. 0.2% in 1998, exact figures for risk groups do not exist).

Some basic rules: Only drink water of safe origin, eg bottled water, be careful with tap water. The following applies to food: cooking, peeling or disinfecting. Be sure to keep flies away from your food. Wash your hands with soap as often as possible, but always after the bowel movement and always before preparing food and before eating, use disposable towels.

Take out travel insurance and a reliable Reiserückholversicherung are strongly recommended.

Presentation of local means of transport

Air: Air Seychelles (HM) offers a good flight network with scheduled flights from Mahé to the islands of Praslin, Denis, Bird, Frégate and Desroches. Helicopter Seychelles offers a shuttle service between the islands. It is also possible to charter aircraft by Air Seychelles by the hour.

Cars: Most of the roads are paved on larger islands such as Mahé, Praslin and La Digue, and gravel roads on the other islands.

Bus: if there is enough time, it is actually not necessary to rent a car in the Seychelles. However, buses are often crowded in the morning and afternoon rush hours.

Mahé
An extensive bus network covers the whole island. There is an hourly bus service on most routes during the day. The fare is a flat rate of Rs 3, paid by the driver. Timetables are available at the terminus in Victoria.

Praslin
There are also useful bus connections on Praslin. The main route runs between Anse Boudin to Mont Plaisir (with a stop at the airport). Buses run here every hour during the day in each direction. Timetables can be obtained from the Praslin tourist office. The flat rate on Praslin is 3 Rs.

Taxi: There are taxis on Mahé and Praslin, a few on La Digue. Taxis have taximeters and fares are fixed, slightly higher on Praslin than on Mahé. Taxis can be stopped right on the street, but it is also possible to order them by phone. Taxis can also be booked for longer tours.

Bicycles can be rented on the island of La Digue. 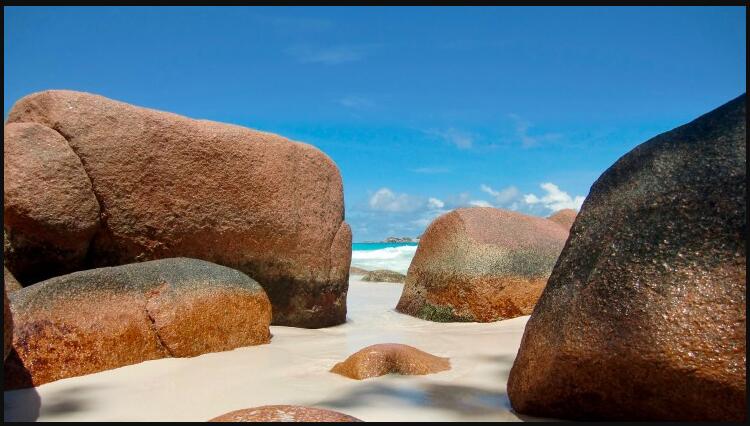 90% of the population lives on Mahé, the main island of the Seychelles surrounded by coral reefs. The capital Victoria is located on Mahé, and the majority of all tourist facilities are located here. The island offers numerous white, fine sandy beaches in tropical surroundings, in the Morne Seychellois National Park there is still pristine rainforest. From Victoria trips to Ste. Offered to Anne Marine National Park. This national park consists of the islands of Ste. Anne, Round, Long, Cerf and Moyenne. Also worth seeing in Victoria are the market, the botanical garden, the Seychelles National Museum and the impressive State House. You can also visit vanilla and cinnamon plantations on the island. Praslin: The second largest island in the Seychelles is connected to the main island by ship and flight connections. The valley Vallée de Mai, in which the strange coco de mer palm grows, is worth seeing. Excursions to the islands of Curieuse, Cousin, Aride and La Digue are also possible. Hardly any cars drive on La Digue and is ideal for exploring on foot. You can visit plantation houses (e.g. Château St. Cloud), vanilla plantations and beaches on rented bicycles. On the island of Frégate lives among other things the frigate bird and flycatcher.

Further north, the tiny rocky island of Thérèse is known for the giant tortoise colony, while the uninhabited island of Cousin was declared a nature reserve a few years ago. Endangered birds that live here include the fairy tern, Seychelles bush singer and the Toc-Toc bird. In April and May, more than 250,000 birds nest here. In addition, cousin is one of the most important egg-laying places for the hawksbill turtle, which is threatened with extinction. The island can only be visited as part of an organized group tour. Arid, the northernmost of the granite islands, only 0.4 square kilometers in size, is home to countless rare plant and animal species and is inhabited by tons of seabirds. The island can be visited from October to April, a circular hike is the best way to get to know the island. The island of Curieuse, along with Praslin, is the only island where the sea coconut grows wild and is a retreat for giant tortoises. On the remote and undeveloped island of Silhouette you can go hiking, snorkeling and diving.

The coral island Denis lies on the edge of the continental base and is particularly suitable for deep sea fishing. Swordfish, barracudas, fanfish and sharks can be caught here from October to December. Bird, 96 km north of Mahé, is known for the millions of seabirds like the soot tern. The breeding season is from May to October. Since the island is also on the edge of the continental base, it is often visited by deep sea fishermen. The coral reef around Desroches prevents high waves and makes many water sports possible. You can go water skiing, surfing, sailing and fishing. Diving courses are also offered.

Plants and animals: Due to the seclusion of the Seychelles, there are many (endemic) plants only found here. Particularly well known is the on Praslin in de Vallée May occurring Coco-de-mer palm tree with the largest seed pods in the plant world. Vanilla also grows in the Seychelles. However, the islands are largely known for their huge seabird colonies. On some islands, countless frigate birds and terns breed, with the fairy terns being the most photogenic. In addition to some other very rare and endemic species, 30 pairs of the paradise flycatcher live on La Digue. About 200,000 live on the Aldabra atoll Giant tortoises, from which almost all giant tortoises in European zoos descend.

History of Ancient Egypt Part I

The history of ancient Egypt encompasses a period of almost 3000 years, and is traditionally reckoned from the collection of the kingdom around 3100 BCE. until the Roman conquest in the year 30 BCE. However, the foundations of Ancient Egypt were laid long before the kingdom was gathered and continuous settlement has been demonstrated in […]

Literature Togo was officially French-speaking at the independence of 1960 and the French had been a school language since the 1920’s. The native languages ​​were therefore difficult to assert as literary languages. From the beginning of the 1940’s, however, novels and plays were written on ewe. by Sam Obianim, Kwasi Fiawoo and Y. Seth Akafia. […]

Visa requirements Passport: is generally required when traveling in Tunisia, the passport must be valid during the stay (Austrian passports must be valid for at least 3 months upon entry). Citizens of the following countries can also travel on a package tour (upon presentation of return tickets and hotel vouchers for the duration of their […]