Senegal is a West African country bordering the Atlantic in the west, Mauritania in the north, Mali in the east, Guinea in the southeast and Guinea-Bissau in the southwest. Apart from a small coastline to the west, the state of Gambia is completely enclosed by Senegal. Senegal is a stable democracy, with regular free and fair elections. As one of few African countries, Senegal has experienced neither military coup nor war.

Senegal was colonized by France from the mid-1800s, remained French colony until 1958 and became fully independent in 1960. The largest city and capital since 1902 is Dakar, with approximately 3.5 million inhabitants.

Muslims (most of them are Sunni Muslims who follow a Sufist religion) make up 95.4 percent of the population, Christians (most Catholic ) count 4.2 percent, and 0.4 percent have traditional local religions (2010–2011). Yet animist traditions are very much present in how Islam and Christianity are practiced. Most Senegalese Muslims are members of one of four Muslim fraternities, who have played an important historical and political role in the country. The two largest are the Tidjanes and the Mourids. Although religion has a great influence on the regular Senegalese, the state is secular, and Senegal’s first president, Léopold Sédar Senghor (1906–2001), was a practicing Catholic.

Senegal is a presidential republic. The president is elected in the general election for five years and can be re-elected once. The Prime Minister and the other government are appointed by the President. The National Assembly, Assemblée Nationale, has one chamber with 165 members elected for five years. 90 MPs are elected by majority in 35 constituencies, 15 are elected by the diaspora, and the remaining 60 are proportionally elected on a national list. Senegal has a multi-party system, with just over 300 lots. The country is divided into 14 regions.

Senegal is a member of the UN and the UN’s special organizations, the World Trade Organization, the African Union (AU), ECOWAS (or Economic Community of the West African States according to abbreviationfinder.org) and the Cotonou Agreement.

The defense consists of army, navy and air defense. The conscription age for both sexes is 18 years. The initial service is 24 months. 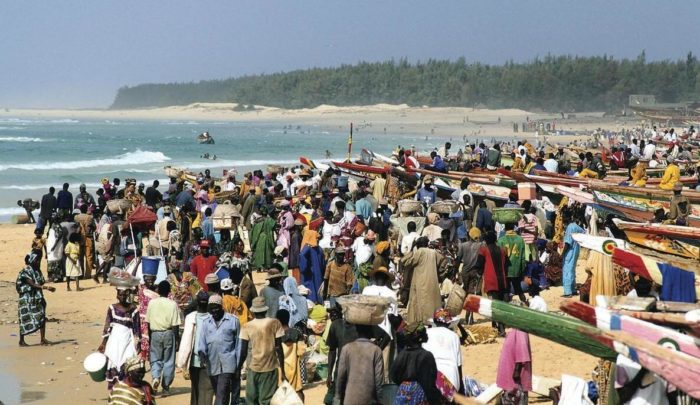 Around 70 per cent of the labor force is employed in agriculture (2013). Among other things, it is grown peanuts, corn, millet, rice, sorghum, cassava, sweet potato, sugar cane, tomato, vegetables and cotton. Domestic animals include cattle, pigs, sheep, goats and chickens.

Important minerals are phosphate and calcium, as well as some iron ore, titanium and limestone. Senegal is located in West Africa’s best area for deep sea fishing, and fishing, especially on tuna, is an important trade route. Offshore oil and gas deposits have been identified.

Industry and the service industries are increasingly employing, and the industry, mainly in and around Dakar, is among the best developed in West Africa. The food industry is most important, mainly with the processing of fish and peanut oil. There are also textile and cement industries as well as mechanical and chemical industries. It is an oil refinery at Dakar. A large proportion of Senegalese work in the informal economy, which in 2015 accounted for 41.7 per cent of gross domestic product (GDP).

Tourism in Senegal is considerable and most tourists come from France. The country’s swimming beaches, the island of Gorée and the national parks are the main attractions. 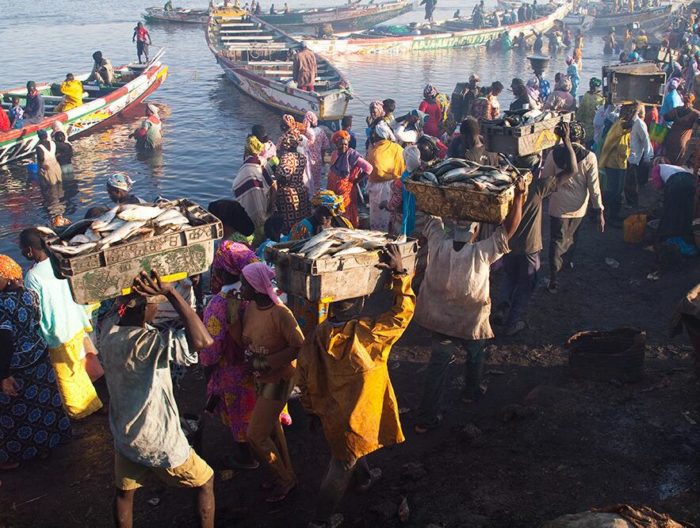 Fish market in Senegal’s former capital, Saint-Louis, at the end of the Senegal River.

In principle, it is compulsory for eleven years and free schooling from the children is six years, but only about 70 per cent of school-aged children are enrolled. High school is two-fold (4 + 3 years). Senegal has three universities and several colleges. 32.3 per cent of the population over the age of 15 are illiterate (2015). Far more women than men are illiterate.

For a long time there was only one daily newspaper in Senegal, state-run Le Soleil. Following a liberalization process in the 1980s, a number of national newspapers were formed. The state-owned Radiodiffusion Télévision Sénégalaise (RTS) operates television stations and there are a few private television channels. RTS operates a national radio network and there are many private radio stations. In 2015, 22 percent of the population had access to the Internet.

Professional ‘griots’ (singers and storytellers) carry on the folk music tradition by reciting historical poetry and poems in ensembles with drums, rattles, whistles and lutes. Other folk music includes children’s songs, love songs and magic-ritual songs. Common instruments are the harp boy ‘ kora ‘ and the xylophone ‘balafon’ as well as flutes and drums. A traditional bearer with international performances was drummer Doudou Ndiaye Rose (1930–2015). Pop artist Youssou N’Dour (1959–) is considered one of Africa’s most famous singers and is especially known for the popular music genre ‘mbalax’. Senegal is also known for hip hop. Some renowned rappers and groups include Positive Black Soul, Daara J and Fou Malade. Rappers in Senegal are known for being very politically engaged and were decisive in the elections in both 2000 and 2012.

Dance traditions include both ritual and social dances, and are influenced by Islamic and European culture. The dances are both solo dances and collective ring dances, and masks are used in many dances. Ethnic dance dramas are performed by the national dance company Les Ballets Africains, also known abroad as the Senegal Ballet.

One of the country’s most important export goods is peanuts. The picture shows a clerk keeping an account of the number of peanut bags.