The Sahara Desert is the second largest desert in the world with approximately 9 million km2. It is located in North Africa (between Mediterranean and Sub-Saharan Africa) covering several countries of the African continent: Algeria, Chad, Egypt, Libya, Mali, Mauritania, Morocco, Niger, Sudan and Tunisia.

It is bordered by the Mediterranean Sea and Atlas Mountains to the north, the Red Sea to the east, the Sahel to the south and the Atlantic Ocean to the west. 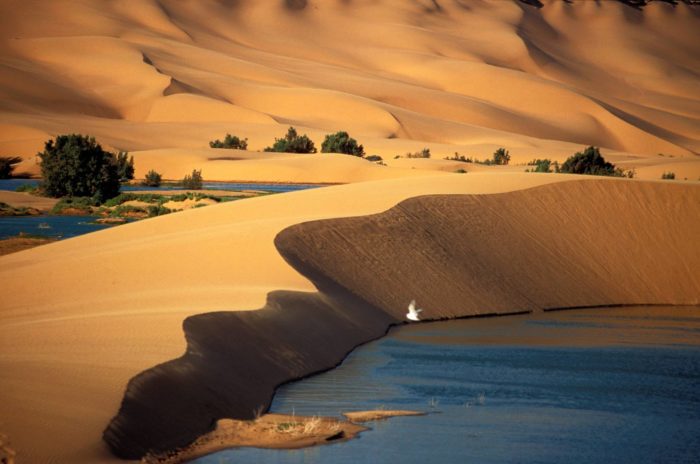 The deserts are extremely arid sites (dry) at high temperatures, low rainfall and low relative humidity. The Sahara Desert is the warmest in the world, due to its hyperarid climate.

It has a high thermal amplitude, since several temperature variations occur. Thus, during the daytime temperatures can reach 50°C while at night they can reach -10°C.

In the region, the winds are very recurrent, which generates several sandstorms, since it is largely formed by dunes.

Is it possible to snow in the Sahara Desert?

Although it seems strange, it is possible to snow in the hot Sahara desert. The last episode took place on January 7, 2018, when snow covered the dunes of the landscape.

In this case, forecasters believe that Europe’s low temperatures and humidity have reached the desert and caused snow. The accumulated ice melted during the day as the temperature increased.

What makes snow formation in the desert difficult is the low humidity of the air. Because of this, snowfall is a rare phenomenon, but it can happen, other times with the presence of snow occurred in 2016, 2017 and 1979.

The landscape of the Sahara desert is made up of dunes, oases and sparse vegetation. It is located in a plateau region and features rugged relief and some mountain ranges.

The Sahara Desert has very scarce vegetation, although it varies greatly from region to region. Thus, we can find lichens, xerophilous, cactus, herbaceous, and long-rooted plants.

Near the oasis we find much of the vegetation, irrigated by the aquifers and groundwater present in the region, which are essential for the survival of various peoples who live there.

The fauna of the Sahara desert is made up of few animals as they depend on adaptation to the hostile climate of the region. It consists mainly of camels, dromedaries, antelopes, goats, as well as other mammals, rodents, migratory birds, insects, arachnids, lizards and snakes.