The Republic of Congo, also known as Congo-Brazzaville, is a republic on the west coast of Africa on the Atlantic Ocean that extends into the central parts of the continent. The southern border follows the Congo River, on the other bank lies the Democratic Republic of Congo. In the west and north, the Republic of Congo borders on Gabon, Cameroon and the Central African Republic. The country also has a border with Cabinda, which is an enclave below Angola further south.

The Republic of Congo is the smallest of the two Republics with “Congo” in the name, both in area and in population. There are less than five million people living in the Republic, almost half of whom belong to the Bakongo People’s Group.

The national anthem of the Republic of Congo is La Congolaise.

Around half of the population is bakongo, other large groups are sanga and bateke. The country has three official languages, French, Lingala and Kituba. The last two are trade languages ​​spoken across much of the region. Kituba is based on the largest local language, kikongo, spoken by the Bakongo. At least 62 local languages ​​are spoken in Congo.

The composition of the Republic of Congo, with several peoples groups and languages, also plays a role in the country’s politics.

About 85 percent of the population belongs to Christian congregations, about a third of whom are Catholics. Other large groups are evangelists and Protestants. Local religions also stand strong in the Republic of Congo, like the kimbangists, a millenarian sect inspired by both Christianity and local religion.

Since independence from France, the Republic of Congo has undergone several troubled periods. Despite the fact that the country has had a multi-party system and elections since the early 1990s, the Republic has for a long period served as a one-party state, led by a president.

The largest party is the Congolese Labor Party, the Party of Congolais du Travail, led by Denis Sassou-Nguesso, who is also president.

In 2015, the Republic of Congo conducted a referendum on a new constitution that allows the president to stand for election for a third term, as well as some new rights. In practice, that means that much of the power in the country now goes directly from the president’s office.

The Republic of Congo is one of the world’s most corrupt countries and much of the corruption is related to the country’s oil industry. President Sassou-Nguesso has been investigated several times for corruption in France, accusing him of refusing. 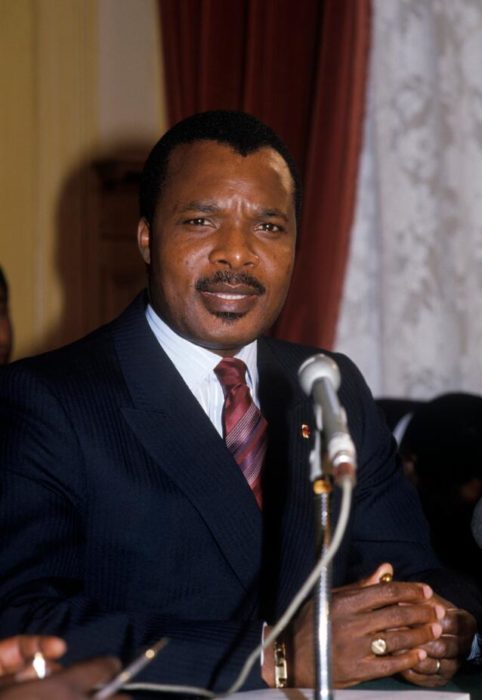 Denis Sassou-Nguesso has been President of the Republic of the Congo since 1979, with the exception of the period 1992-1997. In 1987 he visited Norway.

The largest export of Congo is the crude oil, exported mainly to the United States and Europe. The largest oil company in the Republic of Congo is French Elf. The oil accounts for as much as 92 percent of export revenue, making the country extremely vulnerable to fluctuations in oil prices.

Before oil exports grew in the 1980s, it was the timber export that provided the most revenue, which continues today.

Other items produced for export are sugar, cocoa and coffee. The country also has mineral resources, including diamonds and tantalum. For the local and regional market, food is produced, such as the root cassava.

A relatively small part of the population is fluent in French, yet quite a bit of French-language literature has developed among writers who have their background in the country.

Sony Labou Tansi (1947–1995) was born in the Belgian Congo, but moved as a boy with his family to the French Congo just before independence. At Brazzaville school, Tansi learned French in addition to his mother tongue, kikongo. Gradually he also studied English and literature. As a teacher of French and English, he wrote alongside before founding the Rocado Zulu Theater in 1979. Then also began the book publishing; first in French, then in English. Several of the books, and the plays put on the theater, deal with the political upheavals of the Republic of Congo. Tansi, whose real name was Marcel Ntsoni, became politically active but came to the brim with President Pascal Lissouba. In 1992, Tansi was deprived of his passport and thus could not travel abroad for medical treatment when it became clear that he was HIV positive. Tansi died of AIDS in 1995,

Other well-known authors include Emmanuel Dongala (born 1941) – his best-known book, Johnny Mad Dog, was filmed in 2008. Alain Mabanckou (born 1966) is also well known outside the borders of the Republic of Congo and has won many prestigious awards in recent years. Like Tansi and Dongala, Mabanckou derives its material from the political life of the Republic of Congo, often in the form of biting satire. Both of them today live in exile in the United States, where they teach literature.

The capital of Brazzaville is otherwise known for its vibrant music scene, not unlike the one found in the Democratic Republic of Congo’s capital Kinshasa, a short boat ride across the river. Congolese dance music has roots in local dance tradition.

Bantu folk music has a marked and often complex rhythm that is expressed through singing, dancing and the use of instruments such as drum, xylophone, likembe (thumb piano), harp, seats and lute in a number of different designs. Idiophones, whistles, horns and tube instruments are also used. The musical form is often based on alternation between leader or lead singer and the whole group.

The Babinga Pygmies have from old age reputation as particularly talented musicians. The Pygmies’ song is characterized by widespread use of jumble technique, great melody leaps and a rich multi-voice with imitation as well as parallel voices and great individual freedom for improvisation.

Urbanization has created the conditions for a multitude of new forms in which folk music’s expressions are used in modern popular music, see soukous.

Theater in the Republic of Congo

Congo has a fairly extensive theater operation. However, if one disregards traditional ritual expressions, it is very young. After 1950, an extensive school theater emerged, and after independence in 1960, a professional theater was created following the pattern of French guest games, which could be seen at the French cultural center in Brazzaville. Three groups or companies were eventually formed: Théâtre Congolais (The Congolese Theater) founded by a.k.a. Guy Menga, Troupe Municipale (Stadsteateret) and Kamango Players, the latter in the port city of Pointe-Noire. In the 1970s, a new drama developed, such as Sylvain Bemba’s L’Enfer c’est Orfeo (Hell is Orfeo). A socialist propaganda theater was developed by Jacob Owei-Okansa.

A number of new groups came into being in the 1980s, such as the playwright Labou Tansis Rocado Zulu and Emmanuel Dongala’s Théâtre de l’Eclair (Theater of Light), both supported by the French Cultural Center. In addition, there was eventually the state-run Théâtre National (National Theater). A strong search for stylization, improvisation and collective working methods has given the new Congolese theater an advanced position in the French-speaking world. has been expressed by attending festivals such as the Limoges Festival in France.