Niger, like most African countries, lacks its own film industry. However, the country has produced two talented filmmakers with international reputation, Mustafa Alassanne (born 1942) and Oumarou Ganda (1935–81), both discovered and assisted by the French documentary filmmaker and ethnologist Jean Rouch. In their work, they observe a critical distance from the traditions of African everyday life, e.g. polygamy and superstition. Other characteristic features are humor and a kind of naive poetry. Alasanne’s films include “FVVA” (“Wife, Villa, Car, Money”, 1972), the country’s first feature film, “Toula” (1973) and “Agaïssa” (2004). Ganda is best known for the autobiographical “Cabascabo” (1967), “Le Wazzou polygame” (1970) and “Saitane” (1972). 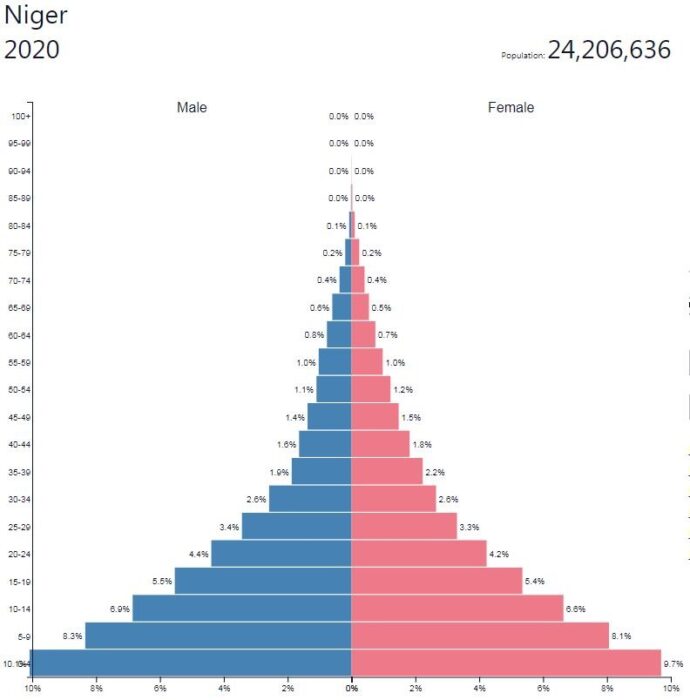 Later names include Mustafa Diop (born 1945) with his “Le Médecin de Gafire” (1984), an attack on widespread occultism, and Malam Saguirou (born 1979), who won many international awards for his documentaries.

Since the 1980’s, the film industry has weakened financially and production has declined.

The art in Niger has a strong connection to Islamic culture. The arts and crafts mainly consist of leather and metal works, pottery, baskets, gourds and textiles, decorated with ornaments that are repeated in different principles in combination with Islamic inscriptions. Figurative visual art is rare.

In Niger there are nomadic and seminomadic folk groups whose way of life has characterized their art. Most prominent are the magnificent fabrics of the Tuaregs and Fulani people, horse and camel shabra. shows up at ceremonies and parties. The most significant modern Nigerian artist is Rissa Ixa.

Music in Niger varies from region to region. Most clearly it differs from the resident groups (eg Hausa and Songhai) from the nomadizing population (Tuareg and Fulani). Among the residents are a class of professional, wandering musicians, griots, who contribute to the occurrence of loans and exchanges. The most important instruments of Hausa griots are fiddle (gogué), various types of lutes, shale (alghaita), trumpet (khaki) and drums; the same instrument types are found at songhai with different names.

The Tuareg music is mainly vocal, and it is usually women who play the few instruments: one-string fiddle (inzad), flute (sareoua) and drum (tindé). The Fulani herdsmen play a four-hole flute, which, together with vocals, gourd rattles and drums (walking), will be used in the music that accompanies mandomus and beauty pageants.

Some modern Nigerian music did not really exist until the late 1980’s, not least because entertainment for music was not entirely acceptable. Among the artists that emerged during the 1990’s, after the government began to support the country’s music life, are the singers Saadou Bori (1966–2008) and Moussa Poussy (1968–2008), who were both in the Takeda group, and the band Mamar Kassey, with singer and flute player Yacouba Moumouni (born 1966) as front figure.

Among Tuaregian artists from Niger can be mentioned Abdallah Ag Oumbadougou (born circa 1962), who plays music similar to what the Malay Tuareg group Tinariwen has become known for. He is also the driving force behind the French-Nigerian group Desert Rebel. The group Etran Finatawa consists of musicians from both tuareg and mbororo, a subgroup of fulani, and draws inspiration from both traditional folk music.

In the country since the late 1990’s there is also a lively hip hop scene.