The Christian Church was established early in Egypt by the evangelist Markus and developed his own form of dogma and cult, based on the ancient Egyptian language (Coptic). In 451, the Coptic Church separated itself from the rest of Christianity. It has preserved its own music, and in Cairo there is an institute to educate singers and seek to keep the Coptic music clean.

With the Arab conquest, Egypt became part of the widespread Arab civilization, and Egyptian music performance was strongly influenced by Hedsjas, Syria and Iran. Elements from Central Asia were added during the Turkmen tulunids (700-800s). Both these and their successors the Fatimids (900-1000s) surrounded themselves with a magnificent court and spent large sums for music and dance. During the Crusades, the Turkish-Kurdish Ayyubids became lords, and during the famous Sultan of Saladin, Andalusian music (muwashah) was introduced by singer Ibn Sana al-Mulk (c. 1200). 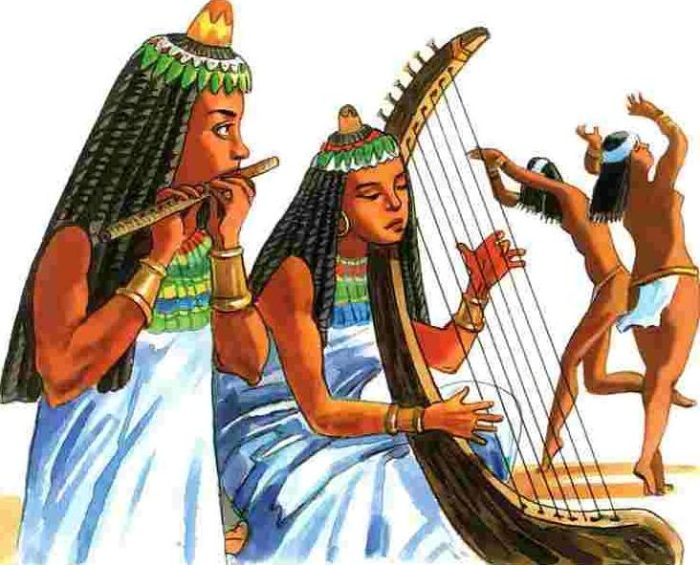 The Crusaders were very impressed with the music of the Egyptians, and through them and traders oriental instruments were introduced to Europe (lute, rebab, scallop, drum). The music scene stagnated during the Mamluks (from 1250) and declined further during the Turkish occupation (from 1517). To this day, the music scene shows traces of Turkish influence.

Only under Muhammad Ali in the early 1800s did a new rise begin, and within a few years several music schools were established. Some of his successors were most keen on introducing European and Turkish music, e.g. khedive Ismail, who had the Cairo opera built and commissioned Aida by Verdi. King Fuad, on the other hand, deliberately worked to foster national Egyptian music. He established an institute for oriental music (1929), and here the first congress for oriental music was held in 1932.

Cairo’s opera and symphony orchestra attracted a European audience, while the majority of Egyptians had their own music, partly the classical Arabic in their Egyptian designs and partly the folk (the Coptic as well as the Islamic). Egypt has had several very famous singers and instrumentalists. Of the song forms are mawal, muwashah, nasid, daur and taqtuqa. Among the creators of modern Egyptian music is Sayyid Darwish (1892–1923). His New Egyptian music was exemplified by the singer Umm Kulthum (1898-1975), the leading representative of Arabic art song. The introduction of modern mass media (gramophone recordings from 1906, later radio and television) in the 20th century created a rapid breeding ground for the development of newer forms, influenced by European and American popular music.

During the Ayyubids, brotherhoods were established by the Sufis and the dervishes in Egypt. The latter are still active in Cairo and use music and dance to reach ecstatic union with the deity (dikr) .

Cairo City Overview Cairo, proudly called “Mother of all cities” by the Egyptians, attracts visitors primarily because of the Giza pyramids, the treasures of Tutankhamun’s tomb and the treasures of the Egyptian Museum. The largest metropolis in Africa stretches 40 km from north to south along the Nile. Most of the city is on the eastern […]

Airport address: Cairo International Airport, Oruba Road, Heliopolis, EG-Cairo Current: An expansion of the subway network is under construction. Line 3 is to run from Mohandessin across the city to the airport from 2021. Information: Information desks are located in Terminal 1 (Old Airport) as well as in Terminal 2 in the arrival and departure halls […]