The Portuguese colonial power’s attempt to eradicate the indigenous cultural traditions became unsuccessful, and many who had been assimilationists returned to their African culture and found literary expression for it. The newspaper O Brado Africano founded by black journalists in 1918 (‘The African Protest Troop’) meant a great deal to national identity, as did the magazine Itinerário (1941-55). From the 1930’s appeared a number of poets who were critical of the colonial power, including Luís Bernardo Honwana (born 1942), with, for example, the short story collection “Nós matámos O Cão-Tinhoso” (1964; “Black Hands”). José Craveirinha (1922–2003) is also counted among the country’s most prominent poets. 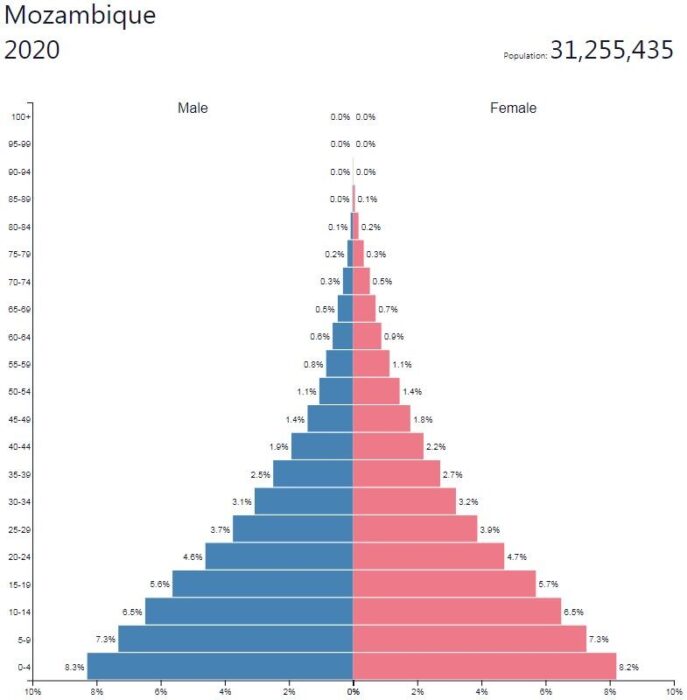 The founding of Frelimo in 1962 and the armed struggle gave rise to guerrilla poetry, and after Mozambique’s independence in 1975 the two lyrical talents Mia Couto, diligently translated into Swedish, and Luís Carlos Patraquim (born 1953) appeared. Some writers have started using African languages, such as Bento Sitoe, who writes in Tsonga. Paulina Chiziane (born 1955) became the first woman in Mozambique with “Balada do Amor ao Vento” (1990) to have a novel published.

Mozambique’s rich theater tradition is intimately associated with music and dance and was also an important element in the liberation struggle.

Of the traditional art in Mozambique, the sculptures and masks of the Makonde people have gained the greatest international interest. Modern macaw sculptures usually consist of one-piece dark wood compositions, depicting human bodies tightly winding around each other. Islamic and Asian influences are found in modern textile designs from Swahili culture along the country’s northern coast.

The realism of Portuguese fascism is preserved in a few colonial monumental works. However, the urban architecture and visual arts of the 1960’s and 1970’s are attributable to modernism. Visual art and modern sculpture in Mozambique include internationally recognized by sculptor Chissano and painter Valente Ngwenya Malangatana. After the 1975 liberation, many artistically well-executed posters and murals were produced.

Mozambique’s varied music culture is largely rooted in migration, partly in early Indonesian and Arabic influences. The latter is particularly noticeable in northern Mozambique, where features such as unanimous and ornamental singing, table tones and the use of instruments such as violin and tambourine (daira) are found.

In Mozambique’s central parts there is a rich flora of both string and wind instruments as well as various xylophone and lamellophone types. The instrumental and vocal music is characterized by complicated poly-rhythmics and multiformity in responsorial form. In the chopi people’s rewritten dance and poetry tradition (mgodo), an instrumental ensemble consisting of 6–30 xylophones in five sizes appears together with dancers and singers in a “large-scale art work”.

In the south, musical arcs, lamellaphones and guitars dominate, while drums are less common. At tsonga, the men form singing and dance groups (makwaya) who perform songs in South African style, while popular music shows influences from eg. Portuguese music and urban music in neighboring states.

During the colonial era, the dance music style emerged marrabenta, whose principal representatives include Dilon Djindji (born 1927) and Fany Mpfumo (1928–87), who worked in South Africa before independence and where marrabenta combined with, among others. jazz and kwela. Another star was Lisboa Matavel (1938–2002). Djindji at the end of his life was a member of Mabulu, a group in which musicians from different generations mix older popular music with, among other things. hip hop. Also important was the group Orchestra Marrabenta Star de Mozambique, which counted among other things. the singers Wazimbo (born 1948) and Mingas, who subsequently enjoyed successful solo careers. The Ghorwane group also has its roots in marabenta.

Jazz has since played an important role in Mozambican popular music. In the 1990’s, a special jazz fusion was created by groups like Kinamatamikuluty, which combined saxophone with the xylophone instrument timbila. The group included, among others, percussionist Celso Paco (born 1966), now active in Sweden. Mention can also be made of Chico António (born 1958), and the group Timbila Muzimba.

Because of the protracted civil war, many musicians chose to go into exile in i.a. South Africa and Portugal. One who chose to stay in his home country and where he became one of the biggest stars was singer Zaida Chongo (1970–2004).

Most of the artists who have their music released are from the southern parts of the country. An exception is the group Eyuphuro, who comes from the northeastern part of Mozambique and sings on makua.

As in many other African countries, youth have taken up hip-hop and developed a domestic variety.