Three négritude poets can be said to represent the French-speaking literature in Madagascar: Jacques Rabemananjara, Jean-Joseph Rabearivelo and Flavien Ranaivo. During the colonial period, attempts were made to introduce French as a cultural language, but Malagasy’s position was strong; It is written language centuries ago, and a large amount of written text is available.

During the 20th century, the ancient genre hain teny was resurrected, a kind of poetic recitation of two voices. Among the most successful writers in the early 2000’s are Michèle Rakotoson and David Jaomanoro. Mention may also be made of Johary Ravaloson and Jean-Luc Raharimanana. 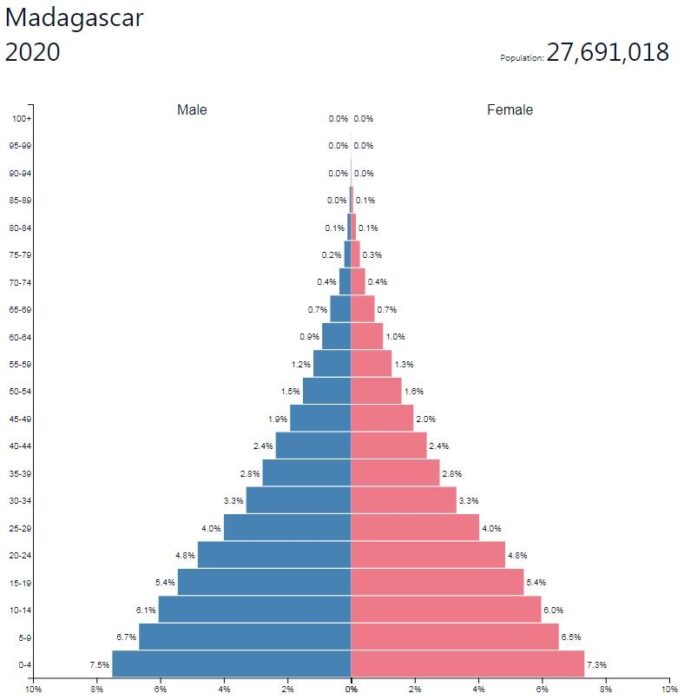 Madagascar’s art history is characterized by Indonesian, Arabic, European and East African form traditions. Madagascar’s traditional arts and crafts are closely associated with the reverence for the ancestors and are part of various ceremonies, where the burial and burial ground are central parts. The mahafaly people usually mark the grave site with tall sculptured wooden poles, aloalo, decorated with geometric patterns and sculptures depicting mainly humans and animals. Today, sculptures depicting eg. motorcycles, cars and aircraft. Across much of Madagascar, it is customary to honor the ancestors with kenotaphs, which are usually made of stone or wood.

Burial, so-called second burial, is common among the groups living on the high plateau. At these ceremonies, the deceased’s remains are wrapped in special burial textiles.

Alongside the European influence since the beginning of the colonial era, music is characterized by assimilation of Indonesian as well as Arabic and African cultural elements. The traditional music practice is vocally oriented; diatonic bias in parallel theses predominates. As a accompaniment, a tube citr, valiha, and a rod citr, jejy, are probably used, both probably of Indonesian origin. These are also found in popular French-African music along with electronic instruments.

One of the first modern groups was the Mahaleo, which was formed in the early 1970’s and reached a large audience with its mix of Western rock and typically Malagasy harmonies, rhythms and instruments, among others. the traditional guitar kabosy. During the 1980’s, Rossy (really Paul Bert Rahasimanana; born 1960) became one of the biggest names with music where accordion occupies a central place. He supported and favored President Didier Ratsiraka, but when he lost power in 2002, Rossy felt compelled to emigrate.

The country’s internationally best-known group since the 1990’s is Tarika. The band uses traditional instruments to a great extent and broke through in Europe before being successful in their home country. Mention can also be made of the group Solo Miral and singer Ricky Randimbiarison (born 1964).

In the country there are a variety of dance music styles, among them watcha watcha, which originates in the northwestern coastal region and is reminiscent of the Kenyan style benga. Other popular genres are salegy, which is one of the most widespread in the country. Among the best known artists are Jaojoby (actually Eusèbe Jaojoby; born 1955) and Orchestre Liberty. Another popular genre is the tsapika, which comes from the southern part of the country.

One of the most internationally renowned artists is the guitar virtuoso D’Gary (actually Ernest Randrianasolo; born 1961). Other notable artists are the accordionist Régis Gizavo (born 1959) and the group Njava.

Domestic music tradition lost significance in the late 1980’s, but has experienced a renaissance underpinned by the interest Malagasy music enjoyed abroad. One of the musicians who plays a traditional instrument is Rajery (actually Germain Randrianisoa; born 1964), one of the leaders in the pipe citra valiha.