Basically, it has to be said that the visa formalities and regulations for the escort service of travel agencies in Libya are constantly in flux. Before you go to Libya, find out from the consulates (see Libya – important addresses).

Passport: is generally required for travel in Libya, the passport must be valid for at least 6 months after the stay. The passport details must be translated into Arabic by a sworn translator.

The passport translation into Arabic must be entered in the passport with a rubber stamp (German on the left, Arabic on the right).
The sworn translator must confirm and stamp his entries on the form, with his stamp partially overlaying the translation stamp. The translation must also be confirmed by a German passport authority.

If there is an Israeli visa or Israeli entry or exit stamp in the passport, Libya will refuse entry. If your passport has an Israeli note, apply for a second passport before you travel to Libya.

Visa: is generally required. Upon entry, an entry stamp with the date is attached to the passport.

Mass tourism like in Tunisia is to be prevented in Libya. After it was discovered that tourists were trying to take prehistoric and ancient finds out of the country, the guide regulation was introduced. You can only travel to Libya if this trip was previously booked through a Libyan travel agency. The Libyan government also aims to bring foreign currency into the country (which would otherwise remain with foreign travel agencies) and to promote sustainable tourism with a manageable number of travelers.

Travel groups with their own vehicle must be accompanied by a representative of the booked Libyan travel agency.

Here you can fill out and print out the visa application for Libya.

Documents: Tourist visa: a completed visa application – 2 current, biometric passport photos – passport with translator’s stamp valid for at least 6 months (see above) – a copy of the passport – fees – travel booking confirmation from a Libyan travel agency with reference number from the Libyan Ministry of Foreign Affairs.
Business visa: In addition, a letter from the German company about the purpose and duration of the trip with a confirmation of acceptance of the costs – an authorization from the Libyan government (five-digit invitation number), which the business partner in Tripoli must apply to the Ministry of Foreign Affairs.

Processing time: about one to two weeks

Sufficient funds: Tourists (including children) and business travelers must provide sufficient funds for the duration of their stay. The following people are excluded:

Vaccinations: You can find detailed information on the required vaccinations, which must be proven upon entry, in the Libya – Health chapter.

Registration requirement: All travelers who require a visa must report to the nearest passport authority and state their whereabouts within 7 days of entry (triangular stamp fee 10 Libyan dinars, there is no registration fee for children registered in a parent’s passport). This does not apply to tourists who are in Libya for no more than seven days. When staying at the hotel, this is usually arranged by the reception.

If the passport is lost, it is necessary for the Libyan passport authority to have the date of entry entered in the newly issued passport. This process can take several days.

Germany: The German children’s ID card is not recognized. Children need their own passport to enter Libya (children’s passport or electronic passport).
Austrians: own passport for children.

Swiss: own passport for children.
The same visa requirements apply to the children as to their parents.

Currency exchange: When entering Libya, every visitor (including children) must exchange freely convertible currencies for the equivalent of $ 1,000. Travelers checks are not accepted.

Exceptions to this rule are:
– Tourists visiting the country with a tour operator, the cost of the stay; must be covered for the entire duration,
– holders of an official business visa,
– student visa holders receiving a Libyan scholarship,
– official Guests

– Persons who wish to move to a person residing in Libya if that person undertakes to pay all living expenses and medical treatment.

Foreign exchange regulations: It is forbidden to import and export Libyan dinar. Foreign currencies can be imported in unlimited amounts, but must be declared on import. The export is only possible in the amount declared upon entry. You should therefore keep exchange documents so that you can prove the permitted amount of foreign currency (the amount specified on entry minus the proven exchanged amount) on departure.

The health service of the Federal Foreign Office recommends vaccination against tetanus, diphtheria, polio and hepatitis A for trips to Libya, and hepatitis B for long-term stays over three months. With special exposure (stay in the country, hunting, jogging, workplace risks, etc.) vaccination against rabies and typhoid can also be useful. These and other questions should be decided in a personal consultation with the tropical doctor or the vaccinator with tropical and travel medicine experience. A valid yellow fever vaccination is required when entering a yellow fever area.

HIV / AIDS is a major problem worldwide, but so far, as far as reliable data is available, Libya has only reached it sporadically. The known risks should be avoided as everywhere.

Prophylaxis: Hygienic eating and drinking (only boiled food, nothing warmed up warmly) and mosquito repellent (repellents, mosquito net, covering clothing, behavior) can prevent diarrhea and other tropical and infectious diseases.

Medications for prophylaxis against malaria are hardly useful, since malaria pathogens occur only in small numbers in the south of the country.

The medical care in the country cannot be compared with Europe and can often be technically, apparatus and / or hygienically problematic. European-trained English / French-speaking doctors are also often lacking. Sufficient global health insurance coverage and reliable travel return insurance are strongly recommended. An individual first- aid kit should be taken with you and should be protected against high temperatures on the way. Here, too, individual advice from a tropical doctor or travel doctor makes sense.

Rail: There is currently no passenger traffic in Libya, but the construction of several routes is planned.

Cars: The road conditions in Libya are very good and the fuel is very cheap. However, you have to expect numerous checkpoints. The main road runs along the coast between Tripoli and Tobruk. Several major routes connect the coast with inland cities (including Sebha, Kufra and Ghadames). The routes are only signposted in Arabic script. The maximum speed in town is 50 km / h, outside 100 km / h (although hardly anyone adheres to it…), right-hand traffic.

Buses and minibuses run between larger cities. However, due to the regulation that tourists should only come to Libya as part of an organized tour, these are of little interest to travelers.

Most regions in Libya (with the exception of the Tibesti region) can be reached as part of a pre-booked tour. Theoretically, you have to be accompanied by a guide from the Libyan travel agency all the time in the country, so you should keep clear for a place in the vehicle.

Description of the main attractions in Libya

The most famous sights are mainly monuments that testify to Libya’s rich cultural roots.

Leptis Magna is 123 km east of Tripoli. It is one of the largest preserved ancient cities in the world. The most interesting buildings include the Severan Arch of Triumph, the basilica of the Roman emperor Septimius Severus, born in Leptis Magna, and the Old Forum. The Roman amphitheater is particularly well preserved. In the Roman Empire, Leptis Magna was of great importance as a trading center for African animals that were supplied from the Sahara Empire of the Garamants. Lions and elephants were particularly popular for the Roman circus games. 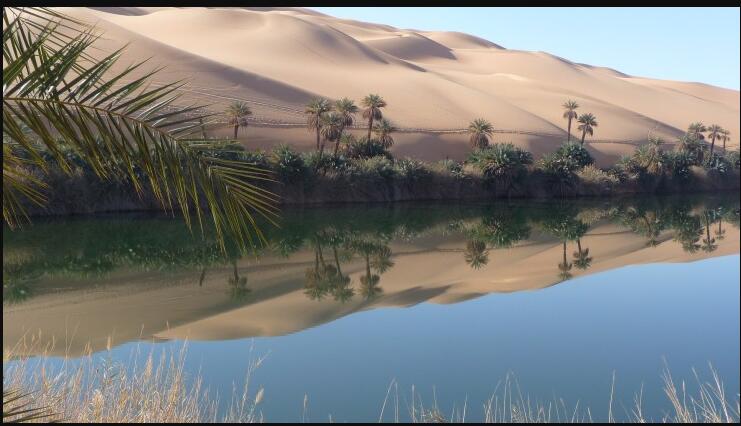 Only a few buildings in the Libyan capital, Tripoli, remind us of the ancient history of the city. An exception is the triumphal arch in honor of Marc Aurel from the 2nd century. In the Ottoman period, the clock tower was built based on the image of Italian church towers. The Gurgi Mosque is a particularly beautiful mosque. The 16th century Spanish fortress is also worth a visit.

There are numerous museums in the city, including the natural history, the archaeological and the Islamic museum.

Ghadames is an oasis town in the border triangle of Libya, Algeria and Tunisia about 550 km southwest of Tripoli.

The approximately 7,000 residents of Ghadames are Berbers and Tuareg. The old town is largely made of rammed earth and is also called “underground town” because many alleys are built over.

In 1986 UNESCO declared the old town center of the city a World Heritage Site. Although the Libyan government built modern residential houses in the 1970s, many residents return to the historic old town in the hot season, because the architecture provides better heat protection.

The Tadrart Acacus Mountains are located in southeastern Algeria and southwestern Libya. The city of Ghat is located near the Acacus.

The rocky massif is adorned by thousands of rock painters, and the Libyan part of the mountains were included in the UNECO World Heritage List in 1985.

In 1850, the German Africa researcher Heinrich Barth first reported on the drawings. The first rock carvings were probably made in the Pleistocene (12,000 to 8,000 BC) and continued until the first century AD. They reflect changes in fauna and flora as well as the different ways of life of the peoples that followed each other in this Sahara region.

Literature, drama and theater Since independence in 1968, English has been the official language. However, the French language has continued to be the most prestigious literary language. The first major author to write in French was Léoville L’Homme (1857–1928), belonging to the Creole population. During the first half of the 20th century, Robert-Edward Hart was […]

An attempted rebellion by the Alexandrians, led by the exile Cleomenes, king of Sparta, won by Antigonus and welcomed as a guest in Egypt by Ptolemy III who had promised to put him back on the throne, attempt begun while the court was on a pleasure trip to Canopus, was soon suffocated in blood (219). […]

Economics and Business in Eritrea

Eritrea developed a significant light industry under Italian colonial rule, but when the country was laid under Ethiopia after World War II, much of it was moved to Ethiopia, and it did not invest in modernization and development. Agriculture is traditionally the most important way of life, and is still the way of life for […]