The language of Ancient Egypt is called Egyptian or Ancient Egyptian. It died out from the 7th century AD, when it was supplanted by Arabic. Egyptian is related to languages ​​in the Afro-Asian language family that are currently spoken in North and East Africa. Berber and Chad languages, and the Middle East, i.e. Arabic and Hebrew. 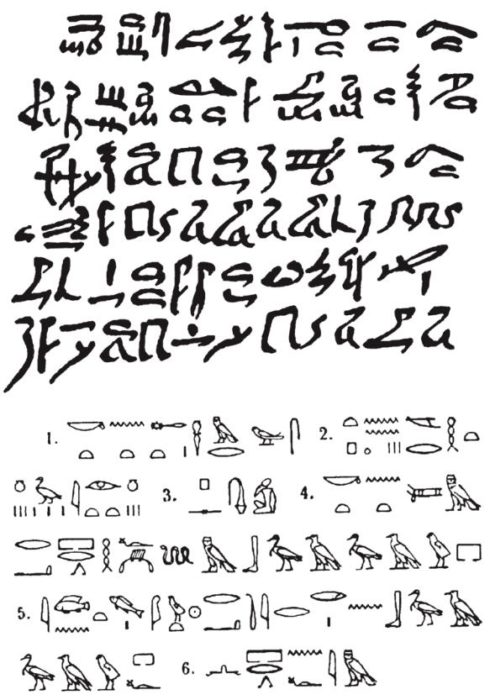 Hieratic writing from Papyrus Ebers (top) with transcription in hieroglyphs (bottom). The translation of the text is as follows: 1) Another (prescription) for the stomach when it is bad. 2) Caraway, goose fat, milk. 3) Boil and drink. 4) Another, to prevent a snake from coming out of the cave. 5) A dried fish laid over the opening of the cave. 6) Then it does not come out.

The scriptural language: the hieroglyphs

Egyptian was written with a caption called hieroglyphs. The monuments were reproduced in their entirety, often drawn in several colors and in great detail. It is a common belief that each hieroglyph represented the image shown. This is only partially correct. Some characters could have such a feature, but the vast majority of hieroglyphs were aural characters, just like our letters. The key to the hieroglyphs’ puzzle was the Rosette stone, a stone pillar with a trilingual text found during Napoleon’s expedition to Egypt in 1799. The Frenchman Jean-François Champollion published the solution in 1822.

On papyrus, contemporary paper used, a italic version of hieroglyphics called hieratic. Hieratically, handwriting was written with a pen and required a fixed writing direction. While hieroglyphs can be read in all directions, hieratic documents are always written from right to left.

A number of literary texts from ancient Egypt have been preserved. The material can be divided into several genres, such as wisdom texts, autobiographies, legends, hymns and poems.

Coptic represents the final stage in the development of the Egyptian language. Since it was used under Hellenism, it is written in Greek letters. Six of the letters are not found in the Greek alphabet, but are derived from the hieroglyphic writing language. Coptic died out as a spoken language in the 7th century, but is still used as a liturgical language in the Coptic church.

The oldest works on Coptic are translations of the Bible, liturgies and hymns. Also, there are sermons and life portrayals of famous pious people such as The Life of St. Antonius, written by St. Athanasius in the 300s.