Alongside an oral tradition in native languages ​​such as kikuyu and Swahili, English-language literature has emerged, initiated by Jomo Kenyatta’s polemical and didactic “Facing Mount Kenya” (1938), which challenged the white man’s history writing. Over the years surrounding Kenya’s political liberation, several autobiographies strengthened national identity in opposition to colonial oppression. The Mau Mau uprising became a source of inspiration for a wide range of novels during the 1960’s and 1970’s. In addition to freedom struggles, authors have explored African traditions, e.g. Grace Ogot in his folktale-like short stories, or modern Kenyan city life as Leonard Kibera in the novel “Voices in the Dark” (1970). Ngugi wa Thiong’o has summarized various trends in Kenyan literature and combined them with strong social criticism. He has also written drama on kikuyu. 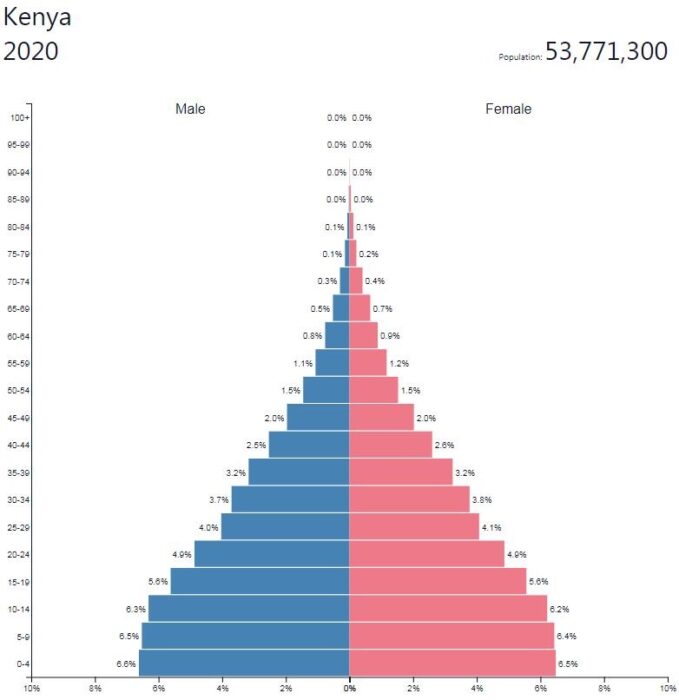 In poetry a number of anthologies have been published. As Kenya’s first big bald, Jared Angira is usually mentioned.

Post-colonial Kenya, its urban population and working class were introduced in the literature by Meja Mwangi in “Going down River Road” (1976). Mwangi has also written children’s literature. Among the country’s younger writers is Binyavanga Wainaina.

Kenya’s traditional art includes expressions from various ethnic groups. Swahili culture is known for its whitewashed buildings with carved dark wood door posts, ivory chairs and metal chests with metal fittings and beautiful boatbuilding. The massages’ wide circular neck jewelery made by ia. very small pearls are appreciated internationally as are sculptures and bowls in stone from Kisii. Wood sculptures are an important part of the tourist trade. Well-made multicolored baskets with leather reinforcements are appreciated both in Kenya and abroad.

Nairobi is the East African Center for Contemporary Art. Artists from several countries work in the capital. Since 1965, Paa Ya Paa Arts Center, led by Elimo Njau, has served as a meeting place for artists. Njau, like the ceramicist and visual artist Rose Mary Karuga, is regarded as the first generation of modern artists in Kenya. Among the established painters and sculptors now in operation can also be mentioned, among other things. Jak Katarikawe, Teresa Mosotti, Rashid Diab, Samuel Wanjau John Diang’a and Sane Wadu.

The great plains between the coast and the Great Rift Valley are inhabited mainly by nomads, among whom the massagers are the most famous. The massagers have developed their own house form. The chieftain’s yard is called a monkey. The young warriors live in a special farm, manyatta. To be able to move to fresh pastures quickly, the houses must be easy to build and easy to transport. The wooden frame consists of piles and branches that are intertwined to form a low, oblong building with round corners. The outside is decorated with clay and cow manure. During the move, the wooden frame is transported to a new place and reused there.

The capital Nairobi has a modern city center which, with its many high-rise buildings, resembles a European metropolis. Most prominent is the conference center Kenyatta. The round high-rise building and other buildings accentuate Nairobi’s silhouette. Along the coast of the Indian Ocean there are a number of modern tourist hotels built in traditional style with local materials such as coral stones and palm leaf roofs.

Musically, there are significant differences between the Bantu-speaking groups on the coast and in the central parts of the country and the Nilotic peoples in the northwest. In addition, the Swahili people have long lived in Muslim tradition, which is why musical characteristics of Arab origin are clear. Nevertheless, African traits are more prominent than the Arab ones. The practice of music is generally regarded as an elevated form of poetic language, and the song is usually accompanied by instrumental accompaniment and dance.

A rich flora of different instrument traditions can be found among percussion instruments as well as string and wind instruments. The double-tube bung’o (zumari) of Arab origin is common in the Swahili people. Among stringed instruments, lyres of varying appearance are common in the central and western parts of the country.

Western style traits in popular music have reached Kenya via both West Africa and Southern Africa. Guitar was played early in Kenya and the instrument has remained important in popular music. From the 1960’s, Kenyan music was influenced by Congolese rumba and kwela from South Africa. One of the most important bands at this time was the Equator Sound Band, later known as African Eagles.

One of the most important music styles is benga, which originates from the folk group luo. One of the creators of the genre and its most famous representatives is Daniel Owino (“DO”) Misiani (1942–2006) and his band Shirati Jazz. Also successful were the Luna Kidi Band and its leader Ochieng Kabaselleh, who played benga with influences from Congolese music.

A distinctive feature of popular music among the kikuyu folk group is that women often have prominent roles; An example is Queen Jane (actually Jane Nyambura; born 1964 or 1965, died 2010). However, Kikuyupope’s biggest name is Joseph Kamaru (born 1939) who got his first hit in 1967 with “Celina”. In 1993, Kamaru left the profane music to devote himself to gospel. Mention can also be made of Daniel “DK” Kamau (born 1949).

Examples of musicians from the kemba folk group are the Kalambya Boys & Kalambya Sisters and Kakai Kilonzo (1954–87) and his band Les Kilimambogo Brothers.

In addition to the styles of music that originate and primarily target a specific people group, there are two directions that have been able to appeal to a wider audience regardless of ethnic affiliation: Swahili music and a variety of Congolese music, both with roots in rumba.

An important scene for many Kenyan bands is the tourist hotel. two of the country’s best known and successful bands, Them Mushrooms and Safari Sound, have played extensively.

In the 1990’s, American and European influences became more important and these were combined with local elements by artists such as Hardstone (really Harrison Ngunjiri; born 1977), Mercy Myra, Eric Wainaina (born 1973) and the Gidigidi Majimaji group. While many young artists have embraced hip-hop, reggae, house and other foreign styles, there are others who use traditional instruments, rhythms and melodies in their music, including Suzanna Owiyo (born 1975).

In the coastal areas, especially on the island of Lamu, taarab, music with lyrics in Swahili and with Islamic roots, is an important genre.