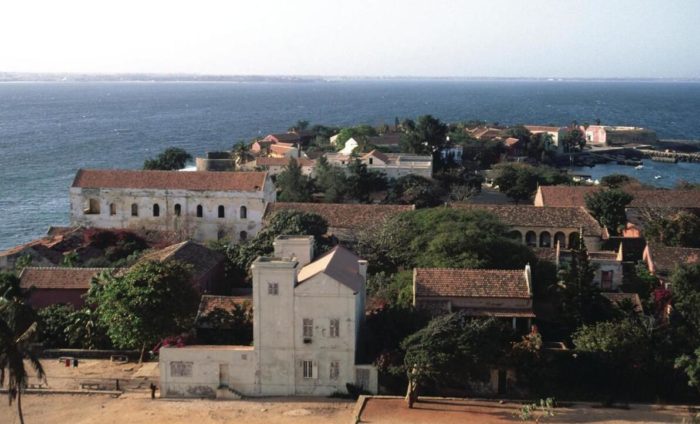 Senegal. From the island of Goree outside Senegal’s capital Dakar. The island was once an important port for the shipment of slaves from West Africa.

Archaeological finds show settlement in Senegal at least 15,000 years ago. Wolof – and serer people immigrated from the northeast around 500 AD Islamization was begun by the Almoravids in the 1000s. In the Middle Ages, the area was part of several large West African kingdoms, such as the Ghanaian Empire (700-1000s) and the Mali Empire (1300s).

The area was sought after by British, French and Dutch. In 1814-1817, France secured a number of agreements, and an expansion into the interior began. Resistance to colonization was initially led by Muslim leaders, which helped spread Islam to the rest of the territory. In 1854, the colony of Senegal was proclaimed, while the territory of Senegal was expanded to the present borders in 1890. The country was incorporated into French West Africa in 1895, but gained its own administration in 1904. Gradually, the Muslim Brotherhoods became important supporters of the colonial power, helping among other things, to extract what would later become one of Senegal’s largest export goods, peanuts.

Senegal gained overseas status within the French Union in 1946 and achieved internal autonomy in 1958. The country entered the Mali Federation the following year, but broke out and formed an independent state with Léopold Sédar Senghor as president in August 1960. A failed coup attempt by the head of government Mamadou Dia in 1962 led to a new constitution with a significantly stronger presidential power. Throughout the 1960s, the board developed in an authoritarian direction, and a one-party state was created ‘de facto’ in 1967. Senghor maintained a close relationship with France, and Senegal became the economically leading state in the former French West Africa.

After several reforms in the mid and late 1970s, several political parties were allowed. Senghor resigned in 1980 and was succeeded by former Prime Minister Abdou Diouf, who continued democratization. In 1981, Senegalese forces moved into the Gambia at the request of the country’s president. The Senegambia Confederation between the two countries was established in 1982, but dissolved in 1989. In 1988, electoral fraud led to large demonstrations with subsequent violence and state of emergency.

A separatist uprising in the Casamance region was wiped out in 1992, but the conflict has continued despite frequent ceasefires. Abdoulaye Wade was elected president in 2000 and re-elected in 2007. Wade changed the constitution several times to increase the executive power and weaken the opposition. In March 2012, after massive mobilization from civil society, Wade lost the election to Macky Sall. In a referendum in 2016, the presidential term of government was reduced from seven to five years with the possibility of re-election once.

In January 2017, Senegal led the ECOWAS force that entered the Gambia to ensure that Gambia’s former dictator, Yahya Jammeh, resigned after losing the December 2016 presidential election. In July 2017, Macky Sall strengthened his position when his coalition got 125 out of 165 MPs.

Ahead of the 2019 presidential election, the Constitutional Council authorized the candidacy of five presidential candidates, including current President Macky Sall. Major opposition politicians such as Khalifa Sall and Karim Wade did not get their candidacies approved, which has been heavily criticized in local as well as Western media. Macky Sall won the presidential election on February 24, with around 58% of the vote in the first round. The opposition felt the result should not be approved due to electoral fraud, but chose not to appeal the result to the Constitutional Council. External observers, on the other hand, recognized the choice as both free and well-executed.

Senegal. Léopold Sédar Senghor was president of Senegal from independence 1960 to 1980. He was an avid advocate for close cooperation with France and also published a number of poetry collections in French. The picture shows him in 1984 on his way to the Académie française in Paris, where he was admitted as one of the 40 members.