Archaeological material shows that a large part of the Sahara was inhabited in prehistoric times by communities that operated with cattle keeping. The period between 7500 and 3000 before our time is often called Sahara’s “green period”. This is the same period when Egyptian civilization occurred. But after a long drought some 4000 years ago, many of the communities in the Sahara disappeared.

In the centuries before our era, trading routes across the Sahara from Carthage were established in today’s Tunisia and Egypt. These went through today’s Niger. Trade routes became more permanent as Islam spread in Africa from the eighth century. The trade gave rise to several kingdoms along Niger, the most important being the Songhai Empire which reached its peak in the 16th century. Then it covered much of today’s Niger and Mali. Important cities in Songhai were Timbuktu and Gao in today’s Mali, which were also centers of knowledge and a hub for trade routes across the Sahara. Some of these went through today’s Niger.

Important items were gold, ivory and slaves. Both Songhai and the kingdoms that came afterwards were partly based on slave holdings. Slavery was first criminalized in Niger in 2003.

Songhai was a Muslim state with a Sharia- based legal system. While the upper class was Muslims, traditional religions also had their place among people. Towards the end of the 16th century, a dispute broke out over who was to take over the throne, and soon the kingdom invaded Morocco from the north. The Songhai kingdom disintegrated, but songhai speakers in the area that is now Niger created the kingdom of Dendi instead.

Over the next 300 years, new states were formed in the west, south and east. In the west, the Mali kingdom grew. South of Dendi, several city states grew, known as the Hausa city states. The largest city state was Kano, in today’s Nigeria. In the east, Kanem-Bornu grew up, in what is today the area around Lake Chad. One of the city states included Zinder, which today is Niger’s second largest city.

At the beginning of the 19th century, the Hausa states were the scene of a religious revival and jihad, led by Usman dan Fodio. Dan Fodio established the Sokoto Caliphate in the Niger-Nigeria border areas.

At the Berlin Conference in 1884-85, when European powers agreed to divide Africa between them, much of the area around the Niger River was allocated to France. In 1899, France sent an expedition up Niger, to what was now French West Africa to fortify its territory. The mouth of the river and surrounding areas were controlled by the British Niger Company, and they were now pushing north to create what was to become Nigeria. They met relatively little resistance. But in 1899 they had to fight Sarraounia Mangou, a female priest and leader of the Azna group. The crucial battle was at her headquarters, Logou near today’s Dogondoutchi.

Shortly thereafter, the French took control of the area around the Niger River and set up several trading stations. The Tuaregs in the Sahara continued their opposition to the colonial rule until 1922. 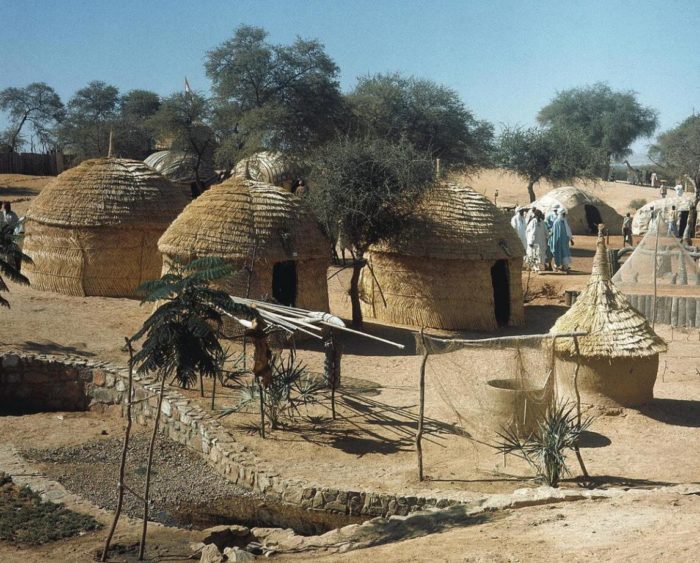 After the death of his mother, Niger was incorporated into French West Africa. This was a federation of eight colonial territories, Mauritania, Senegal, French Sudan (today Mali), French Guinea (today Guinea), Ivory Coast, Upper Volta (today Burkina Faso) Dahomey (today Benin) and Niger. The capital was located on the coast, Dakar, in today’s Senegal. The inhabitants of most of this area were regarded as “French subjects” but without the same rights as Frenchmen.

After World War II, citizens gradually gained more rights, and in 1956 and 1957 elections were held. Gradually, the colonies went from being colonies to protectorates, before the federation disbanded, and independent states were formed. This happened relatively undramatically in West Africa, when compared with the colonial wars in Algeria further north.

Niger became independent in 1960. Prime Minister Hamani Diori, who had also been prime minister under the French, made no major changes to the political system that was all built up. And was re-elected in 1965 and 1970. Although he maintained a good relationship with the former colonial powers, he was an advocate for African independence. Niamey’s political system, on the other hand, was ravaged by corruption, and Diori survived several coup attempts thanks to French military support.

When the drought hit in the early 1970s, Diori couldn’t do anything about it. In 1974, Seyni Kountche conducted a coup d’etat and placed Diori under house arrest. The military regime lasted for almost twenty years, until Niger held its first presidential election in 1993. Mahamane Ousmane won the election, but new turmoil ensued. Niger experienced new coups in both 1996 and 1999. At the same time, the country experienced a Tuareg rebellion. Throughout the period, the military controlled much of political life, which did not change until a new constitution was in place in 2010.