President Nasser set about Egypt’s economic course toward greater state participation. Foreign investment was nationalized, as was the National Bank and other parts of the financial sector. In the countryside, measures were taken to promote cooperative agriculture. This radicalization, in the direction of ‘Arab socialism’, gained support among the Egyptian masses and reverberated in much of the Arab world. Egypt under Nasser became a source of inspiration for opposition and popular movements in much of the Arab world, and Egypt became the regional superpower – which also led an active foreign policy, both globally and regionally. 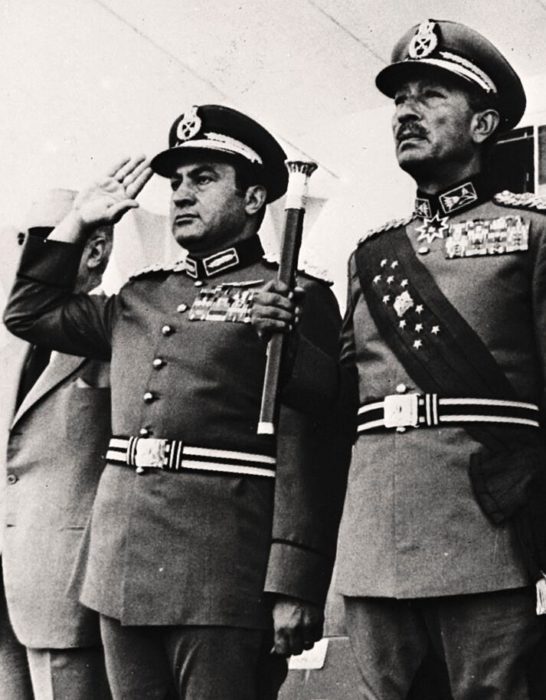 In 1957, the National Union was formed as the only permissible party in Egypt; in 1962 transformed into the Arab Socialist Union. In the same year, a program was developed for the development of Egypt according to socialist principles.

Parallel to the Soviet Union’s foreign policy reorientation against the United States, Sadat made a political and economic change at home. He introduced a liberal economic policy (infitah), which, among other things, invited foreign investment in business and greater private participation.

After the death of President Nasser, and under al-Sadat’s regime, a new political course change. al-Sadat began a process of multi-party governance, and in 1977 several parties were again allowed. In 1976, he was re-elected for a new six-year term, and in 1978 Nasser’s Socialist Union was effectively dissolved by being merged with Sadat’s newly formed power platform, the National Democratic Party (Hizb al-Dimuqratiyah al-Wataniyah, NDP). The goal of the democratization process was to liberalize Egyptian social life, but also to create a power base for Sadat himself, and to attract financial support from the West.

In the economic sphere there was also liberalization, but partly because of high population growth and lack of land and labor, the social conditions of the masses deteriorated. In 1975 there were riots in Cairo, in protest of the high cost of living and high inflation. When al-Sadat, in 1977, tried to reduce the large government subsidies on some foods, which since the time of Nasser had been a safety valve to reduce poverty, came to violent riots, and he was forced to reverse the decision.

Egypt and Syria signed a defense agreement in 1955. On February 1, 1958, Egypt and Syria joined the United Arab Republic, (United Arab Republic, UAR) with Nasser as president. An invitation was made to other Arab states to join, but only (Northern) Yemen entered into a loose association under the name United Arab States, which then dissolved in 1961. By that time Syria had withdrawn from the UAR that same year. Following the coup in Yemen in 1962, Egypt engaged in the civil war there and had at most 70,000 soldiers in the country. After a military coup in September 1961, Syria withdrew from the union with Egypt.

In 1970, Egypt, Sudan and Libya agreed to enter into a new union, but Sudan withdrew and was replaced in 1971 with Syria. In 1971, a new constitution was passed and the country’s name changed to the Arab Republic of Egypt.

In 1972, relations with the Soviet Union deteriorated as Sadat expelled Soviet military advisers and experts. One of the reasons for the partial breach was that Egypt believed the Soviet Union was training the supply of weapons at a time when Sadat was under political pressure to go to war against Israel.

Following the peace agreement with Israel, Egypt became one of the largest recipients of military and other assistance from the United States.