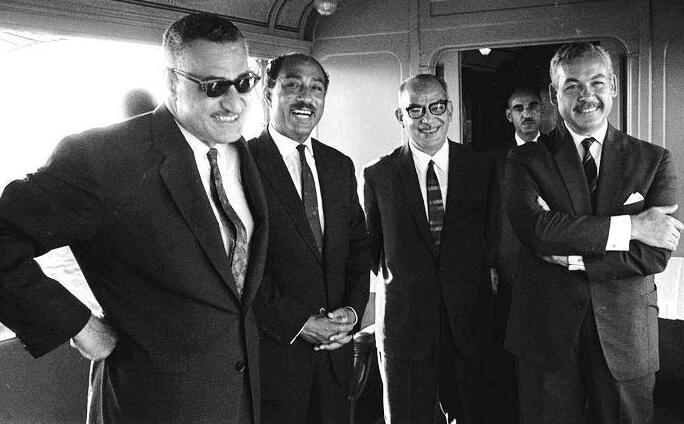 The first Aswan Dam, a dam of the Nile far south in Egypt, was built in 1902, and one of the military regime’s first decisions after the takeover was to build a larger dam, as a symbol of New Egypt, and as a basis for both agriculture and industrial travel.. In 1955/1956, financing of the building was secured through loans from the World Bank, the United States and the United Kingdom. The Soviet Union had also offered loans. When the United States and then the United Kingdom withdrew their loan offers, Nasser responded by nationalizing the Suez Canal. The revenue from the canal was intended to finance the construction of the Aswan Dam. A proposal for international administration of the canal was rejected by Egypt, and the Western great powers chose to intervene militarily against the Egyptian regime.

The subsequent war on the canal (Suez conflict) began with Israel attacking Egypt by invading Sinai on October 29, 1956, to – officially – destroy Palestinian bases there. Ever since the 1948 war, a series of minor clashes between Egypt and Israel had taken place, and the Egyptians supported the Palestinian resistance movement, including the Gaza Strip, which Egypt took control of after the 1948 war. On October 29, British and French representatives met and advocated an ultimatum: the Egyptian and Israeli forces would have to go 16 kilometers to either side of the canal, otherwise France and Britain would intervene.

Egypt refused to bow to the claim, and on October 31, the Franco-British military operation against Egypt began with bombing of targets elsewhere in the country and the launching of military forces. The invasion was strongly criticized in the UN, and by the United States and the Soviet Union. At midnight on November 6, a UN-supported ceasefire was adopted, and the United Nations deployed a peacekeeping force, the United Nations Emergency Force (UNEF) , which Norway also participated in, which remained until 1967. Construction of the Aswan Dam began after the war with technical and financial support of the Soviet Union.

Relations between Egypt and Israel remained tense after the war in 1956, and in 1967 Nasser asked the UN to withdraw the UN force. On May 23, Egypt closed the Tiran Strait at the entrance to the Gulf of Aqaba for Israeli shipping, thus blocking the port city of Eilat. Egypt also signed a defense pact with Jordan and Iraq. Israel viewed the closure as an act of war, and the tension between the two countries increased. 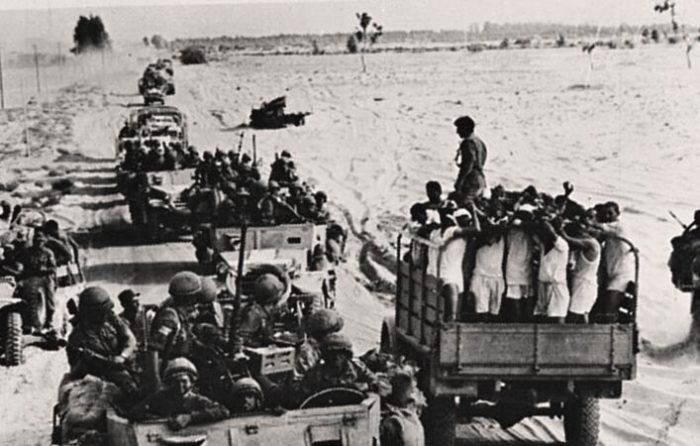 Israeli forces advance in Sinai during the Six Day War.

On June 5, the Six Day War broke out when Israel launched an extensive air strike against Egyptian, Jordanian, Syrian and Iraqi airbases, while Israeli troops advanced on the Gaza Strip and Sinai, as well as on the West Bank and along the Israeli-Syrian border to Golan. On June 8, Israeli forces joined the Suez Canal, and a new UN-supported ceasefire was signed. Egypt suffered defeat and lost the Gaza Strip and Sinai, which was occupied by Israel; The Suez Canal was blocked. President Nasser assumed responsibility and announced his departure. After mass demonstrations in Cairo, he withdrew the resignation.

The military leadership, pan-Arab orientation and anti-Israeli politics were continued by Vice President Anwar al-Sadat, who took over as head of state. However, Sadat started a major change in Egyptian politics, first in the domestic and economic spheres, then in the foreign and security policy. He turned the political and economic orientation away from Nasser’s socialist course, and facilitated a later peace agreement with Israel. 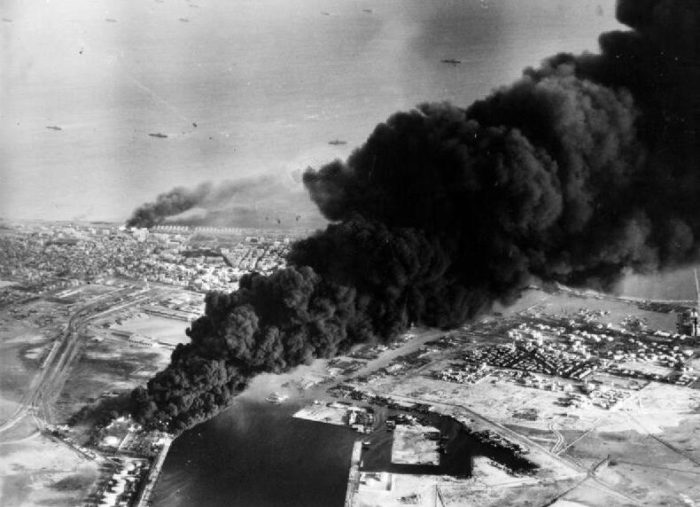 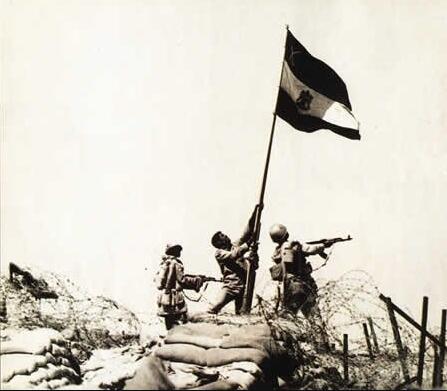 Egyptian soldiers raise Egypt’s flag in Sinai, after occupying the territory occupied by Israel in 1967, October 6, 1973.

Since 1971, Egypt, along with Syria, had planned a coordinated attack on Israel, and in 1973 Sadat succumbed to the strong internal pressure to go to a new war, the so-called Yom Kippur war. October 6 – in the midst of the Jewish holiday of Yom Kippur as well as the Muslim Lent Ramadan – Egyptian forces crossed the Suez Canal, broke through the Israeli Defense Force and entered Sinai. Soon, however, the war turned, and Israeli forces advanced until they stood only 60 kilometers from Cairo. A UN-backed ceasefire was re-entered, and a peacekeeping force deployed, United Nations Emergency Force II (UNEF II). In 1974, Egypt and Israel reached a limited withdrawal agreement, and relations with the United States improved. On June 5, 1975, the Suez Canal was reopened to traffic.

This was the third war against Israel, and Egypt – despite its population superiority and military power – suffered defeat in all. This contributed to the political change President Sadat made in the following years, until his death in 1981 – partly in the economic field and partly in the security policy.

The peace agreement with Israel 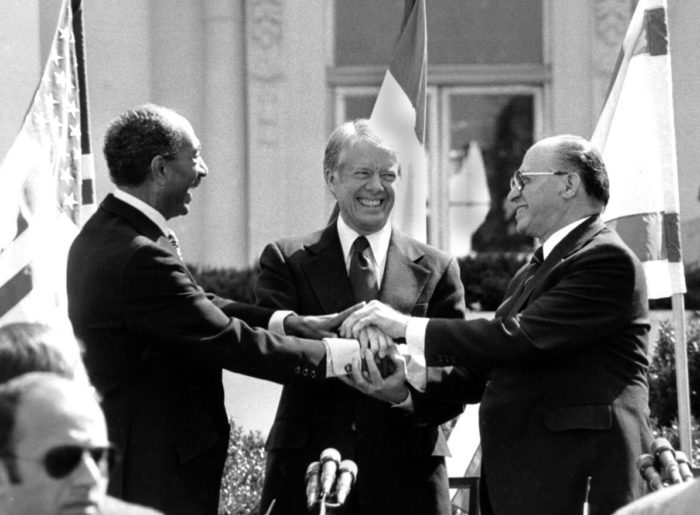 US President Jimmy Carter (center) with Egypt’s President Anwar Sadat on the left and Israeli Prime Minister Menachem Begin on the right after the peace agreement was signed on March 26, 1979.

Even before the October war, President Anwar al-Sadat was prepared to seek peace with Israel, but he wanted to be able to negotiate based on strength – and therefore launched the war that showed Egypt’s military threat to its neighboring country and region. He initiated an approach to Israel, and in November 1977, Sadat surprisingly traveled to Jerusalem, where he spoke at the Israeli National Assembly Knesset and had talks with Israeli Prime Minister Menachem Begin. With US President Jimmy Carter as mediator, Sadat and Begin Camp signed the David Accord, which culminated in two peace agreements.

On March 26, 1979, the two countries then signed a peace treaty in which Israel pledged to return Sinai to Egypt within three years. The two countries would resume diplomatic relations and trade relations, and Israeli ships would be allowed to pass unimpeded through the Suez Canal. A peacekeeping force was to be deployed in a buffer zone between the two countries, east of Sinai on the border with Israel, and one – the Multinational Force and Observers (MFO), with the Norwegian commander – was deployed in March 1982, parallel to the last phase. in the Israeli withdrawal.

While Sadat and Begin received the Nobel Peace Prize for peace, it was condemned in the Arab world, and Egypt was excluded from the Arab League, which moved its headquarters from Cairo to Tunis. The Arab countries severed diplomatic relations with Egypt and ceased financial assistance. In Egypt, the peace agreement was presented to the people in a referendum, where 99.9 percent of the votes supported Sadat. In Parliament, however, 13 representatives voted against the agreement, and the opposition was greater than the outcome of the referendum indicated.

In September 1981, Sadat fought against large parts of the opposition, where a number of leading critics of his regime within the Muslim organizations and the Coptic church were arrested. The brother of one of the imprisoned Muslim activists, Lieutenant Khaled el-Islambouli, ended Sadat’s regime by assassinating the president during the military parade in memory of the October war, October 6, 1981.

President Anwar al-Sadat (right) and then Vice President Muhammad Hosni Mubarak. Mubarak took over as president after Sadat was assassinated in 1981, and spent 30 years until he was ousted by the military following popular protests in 2011, as part of “The Arab Spring.”

After the regime change in 1952/1953, there were sweeping political changes in Egypt, both in domestic politics – and above all in economic policy – and in foreign policy. Under the Free Officers, Egypt introduced a radical policy and a stronger regional role.