Muhammad Ali Pasja consolidated power and expanded economically and militarily. He neutralized or eliminated his political opponents, especially the Mamluks, while the army was strengthened. A marine and merchant fleet was built, and so was industry, not least geared to military needs. A textile industry was founded to make use of cotton production. Under Muhammad Ali’s rule, several Egyptians were sent abroad to study, and an intellectual elite emerged. The economic development led to military expeditions, among other things to promote trade. By subjugating northern Sudan in 1822, Egypt became a separate empire rather than a province of the Ottoman Empire, of which the country was still formally part.

Under Muhammad Ali, the Egyptian army was expanded to around 100,000 men, including through forced recruitment of peasants. With this, Muhammad Ali went to several wars; in Hijaz (1811–1818), Sudan (1820–1822), Crete and Cyprus (1824–1828), and in Syria (1831–1833 and 1839–1840). His son Ibrahim Pasja was commander-in-chief of the army, which in 1831 threatened the very capital of the Ottoman Empire, Constantinople. The Egyptian expansion threatened British trading interests in the Middle East, and in 1840 the British Ottomans came to the rescue and forced the Egyptians out of Syria. 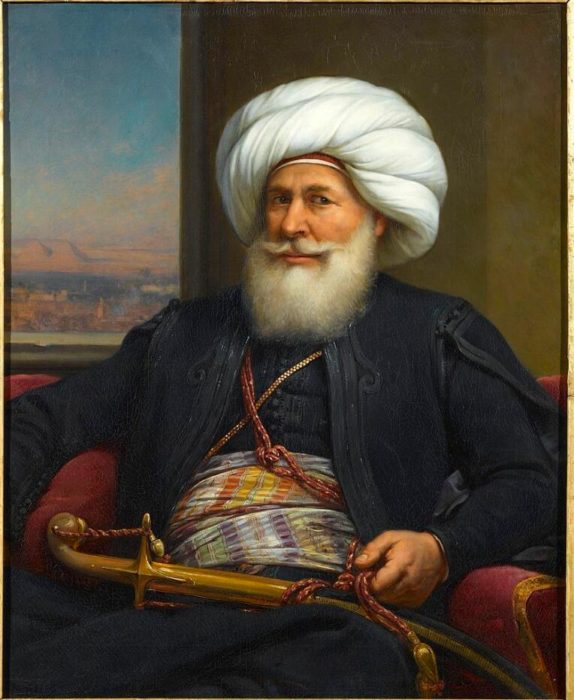 Muhammad Ali Pasja ruled Egypt from 1805 to 1848, undertaking a large-scale modernization and going to numerous wars. Formally speaking, Egypt was still an Ottoman province, but in practice Muhammad Ali ruled the country as a separate empire, with a high degree of self-rule.

Muhammad Ali Pasja passed away in 1848 and died in 1849. His successors were Abbas 1 (1848–1854) and Said (1854–1863). Under Said, the construction of the Suez Canal was started with French capital interests, and opened in 1869. Under Muhammad Ali’s grandson Ismail’s (1863-1879) rule, the modernization process continued, with rail and telegraph construction, and irrigation channels for irrigation. The development was largely financed through foreign loans, and Egypt’s debt increased sharply. The loans were mostly in European banks, and with justification, European countries intervened and introduced a system that allowed a very large share of the national budget to repay loans, and a British and a Frenchman took a seat in the government. When Ismail tried to remove these in 1879, he was deposed by the Sultan, whereupon his son Tewfiq was proclaimed kediv (ruler).

The system was very unpopular and aroused strong resistance. In 1881, an uprising broke out in the army led by Colonel Ahmad Urabi, who threatened the Kediv’s power. Tewfiq requested British and French support to turn down the uprising. After first bombing Alexandria, British forces landed in Ismailia in 1882, and during the battle of Tal al-Kabir, the Egyptian army led by Urabi was defeated. Kediven had envisaged the British forces withdrawing as soon as he regained control himself, but the invasion would prove to be the start of decades of British rule and occupation. The last British forces did not leave the country until 1956.

After Tewfiq’s death in 1892, his son Abbas 2 took over as Kediv, and he supported the building of a nationalist movement, which grew under the leadership of the lawyer Mustafa Kamil. Under British rule, Egyptian business was unilaterally focused on the export of raw materials to British industry, primarily cotton.

When the Ottoman Empire joined World War I on German side in 1914, the British deposed Kedive and declared Egypt a protectorate. Abbas 2 was replaced with Tawfiq’s brother, Hussain Kamil. He was followed in 1917 by his brother Fuad. 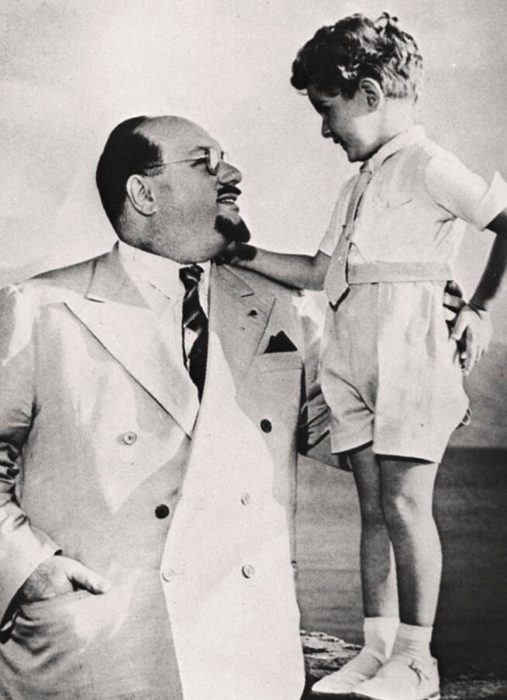 During the war, Egypt served as the most important British military base in the Middle East, and forced labor and increased taxes were imposed on the population. This led to increased opposition to the British government, and increased support for the nationalist movement. When the war ended in November 1918, a group of prominent Egyptian citizens with the leader of the nationalist movement Saad Zaghlul wanted to send a delegation, in Arabic wafd, to the peace talks in Versailles to submit their claim for full Egyptian independence. However, the British High Commissioner said no, and eventually arrested and exiled Zaghlul and his men. The Egyptian people reacted with anger, and riots and protests broke out across the country. The protests, where women played a prominent role, have since been known as the 1919 Revolution.

Zaghlul eventually traveled to Versailles, but met little understanding of his desire for independence. His initiative, however, developed into a political party, the Wafd Party, which was to dominate Egyptian politics in the coming years. The British entered into negotiations with Zaghlul, but refused to comply with his demands. Instead, the British authorities chose to formally abolish the protectorate in February 1922, so that Egypt achieved nominal independence, with King Fuad as head of state. However, there was independence with strong reservations, and the British retained their military presence, control of Sudan and strong influence on Egyptian foreign policy.

In 1923 Egypt was given a new constitution, which institutionalized an elected parliament, which in the years leading up to the 1952 revolution (which was in fact a coup) was dominated by the wafd party. At the same time, the constitution also gave the king considerable power, and on top of that came the presence of the British. The period leading up to the fall of the monarchy was marked by a power struggle between these three parties, as well as the question of full independence. A new agreement with Britain in 1936 formally ended the British occupation of the country, but gave British forces access to the canal zone ( Suez Canal ) for another 20 years. During World War II, Egypt became a battleground between German and Allies forces during the fighting in North Africa, and the country was again of vital strategic importance as a British base in the Middle East.

In 1945, Egypt was actively involved in forming the Arab League, whose headquarters were added to Cairo. Egypt was one of the founders of the UN that year. In May 1948, Egypt was among the Arab countries that attacked after Ben Gurion proclaimed the new state of Israel. However, the Egyptian forces were both poorly equipped and ill-prepared. Angry over the defeat of the war in 1948 were among the factors that drove Gamal Abdel Nasser and the Free Officers, who, through a coup four years later, took power in Egypt. 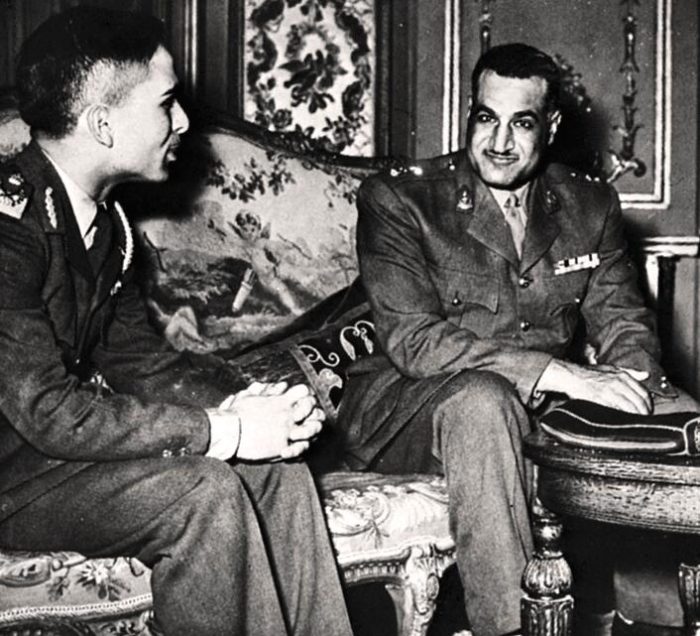 Gamal Abd al-Nasser (right) was one of the leaders of the coup against King Farouk in 1952 and was the country’s leader, first as prime minister, later president from 1954 to 1970. The picture is from 1955, when he had King Hussein of Jordan on state visits.