The Arab conquerors subjugated Egypt in 641, and were then ruled by a number of independent Muslim dynasties: the Fatimids, Ayyubids and Mamluks, before Egypt became a province in the Ottoman Empire. With the exception of Napoleon’s three-year occupation from 1798 to 1801, the country remained in practice an Ottoman province until the British entered the First World War, with one important exception: During the nineteenth century Muhammad Ali Pasja ‘s rule, Egypt experienced a high degree of independence and a flowering time that is still held high in the national Egyptian narrative.

From ancient to medieval

By the division of the Roman Empire in 395, Egypt came under the Byzantine Empire. In the 600s, Egypt was a short time under the Persians, but these were displaced by the Byzantine emperor Heraklios in 626. During the Great Islamic Conquest after Muhammad’s death in 632, Egypt was conquered in 641 by the Arab general Amr ibn al-As. Until 969, Egypt was ruled by governors deployed by the Omayyad caliphs in Damascus (to 750) and the Abbasids in Baghdad. The occupation was carried out without particularly strong opposition from the Christians, who already had a strained relationship with the Byzantine Empire.

The new Islamic rulers did not interfere in religious matters, both because Islam was in principle tolerant of other religions and because they were in the minority. During this period, however, the Arab population increased sharply through immigration from Arabia and Syria. The Copts felt their positions threatened and revolted, the latter being bloodied down around 830. It was hundreds more years before the Copts became a minority in Egypt. Yet, within half a millennium, Egypt was transformed from a Hellenistic and Christian state into a core country in the new Islamic world.

As political cohesion within Islam hit cracks, Egypt seized the opportunity to become independent. In 868, Turkish General Ahmad ibn-Tulun stopped all payment of taxes to the Caliph in Baghdad and instead used the money to build a new capital outside Fustat, including the famous mosque bearing his name. A hundred years later, Egypt became fully independent during the Fatimid dynasty (969–1171). The Fatimids were a Shiite, Ishmaelite dynasty that claimed to be descended from Muhammad’s daughter Fatima. The first Fatimid caliph in Egypt was al-Muizz (953–975), who conquered the country in 969 and founded, among others, the new capital Cairo. Under his successor al-Azaz (975–996) the dominion was extended to Syria. 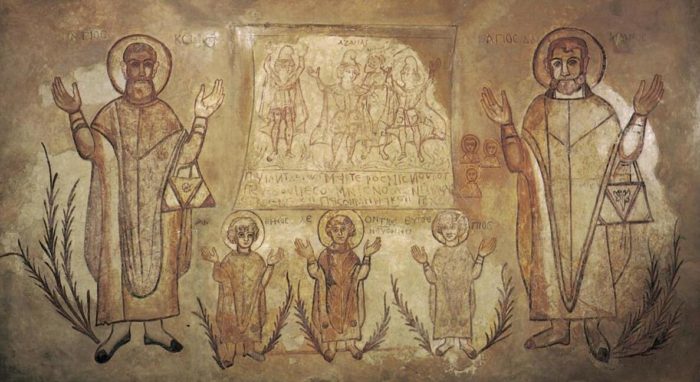 The later Fatimid rulers were weaker, but it was not until 1171 that Egypt returned under Sunni Muslim control. The famous Kurdish- Iraqi commander Salah ad-Din ( Saladin) conquered Jerusalem from the Crusaders and took power in Egypt. He founded the Ayyubid dynasty, which ruled Egypt from 1171 to 1250.

Cairo became the foremost commercial city within Islam and the mosque al-Azhar its foremost educational site. In order to finance the many wars and the significant construction activity, much of the land was left to the Kurdish and Turkish officers, who with their troops of slaves and released were the supporters of the regime. These were called Mamluks (by Arab Mamluk – “bought slave”), and these gradually became the country’s true rulers.

At the Battle of Hattin in 1187, the Ayyubids, with Saladin in the lead, won a crushing victory over the Crusaders and conquered Jerusalem. 13th century drawing by English historian Matthew Paris.

Around 1250, the Mamluks gained power in Egypt. The Mamelukk regime was a military dictatorship that could only be maintained through the supply of slave soldiers from Islamic countries in Asia. The most significant Mamluk sultan was Baibars, who ruled from 1260 to 1277, who fought back a Mongol invasion attempt and consolidated the regime. His policies laid the foundation for a new boom in trade and culture, not least after the Abbasid caliphate in Baghdad collapsed.

Egypt consolidated its position as the most important state of Islam by gaining control of the holy cities of Mecca and Medina, and Islamic expansion continued south to Sudan. Later, the kingdom again fell into disrepair, and several civil wars and Mamelukian disobedience followed. At the same time, a new superpower emerged in the region: the Ottoman Empire. The Ottoman Sultan Selim 1 overcame the Mamluks at Aleppo in 1516 and deposed the last Sultan, Tuman-Bey, in 1517. Egypt then became a province in the Ottoman Empire.

Even though Egypt was a province in the Ottoman Empire, it was still the Mamluks who filled the country’s administration. Several uprisings within the occupation forces weakened the Ottoman regime. The Emperor of France Napoleon 1 Bonaparte led the French invasion of Egypt in 1798, and with his superior weapons could quickly defeat the resistance. France wanted to submit to Egypt as a colony, but never gained control over it. Eleven months after the gangway, Napoleon secretly left Egypt, and General Jean-Baptiste Kléber, who had been left in charge of the occupation, had to enter into a collaboration with the Mamluks. 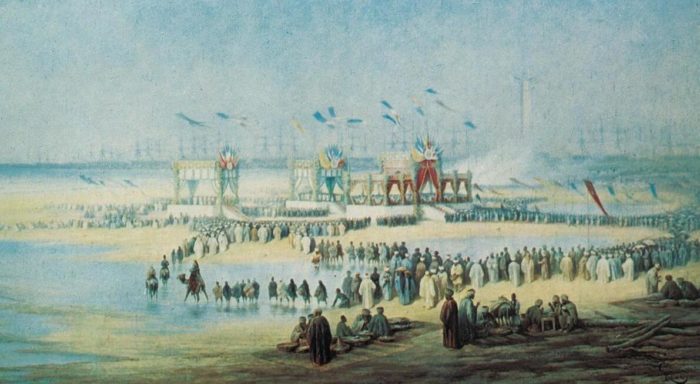 The Suez Canal was built under the direction of a French engineer, Ferdinand de Lesseps, and opened by Empress Eugénie on November 17, 1869. Painting by E. Rion.

In 1801, the Ottomans recaptured Egypt with British support, and nominally assumed control of the country again. The living conditions of the Egyptian people deteriorated greatly during this period, and many turned to Muslim clerics, the ulama. Along with the merchant stand, the ulama looked around for a leader who could better Egypt’s position. The man they turned to and who was going to change Egypt’s history was Muhammad Ali Pasja. He came to Egypt as part of an Albanian military force that was to reestablish Ottoman control of the country after the three-year French occupation from 1798 to 1801. In 1805 he was appointed Egypt’s governor, and later took the title of Kediv. 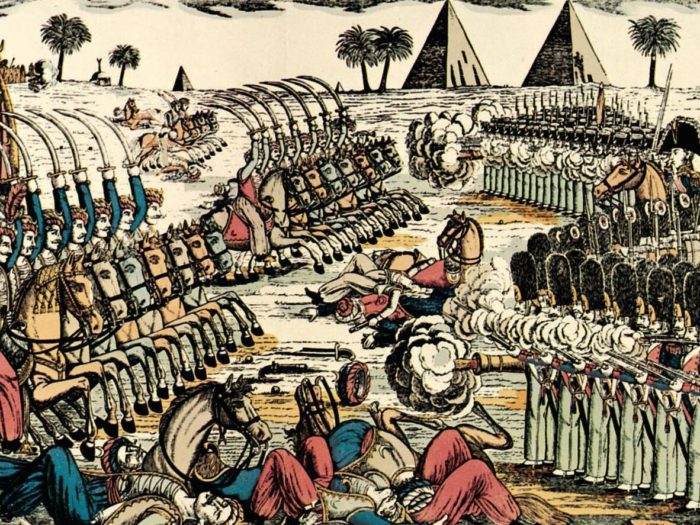 In 1798, Napoleon Bonaparte led an expedition to Egypt, and in July he struck the Mamluks at the pyramids.