Kush (in today’s Sudan) had been under the Egyptian influence politically and culturally since the new empire. Meanwhile, the country had grown into a state, with its headquarters in Napata (near Barkal Mountain). The Cushites pressed north. Piye first conducted a campaign involving both Teben and Memfis. His successors, including Shabaka and Taharka, annexed Egypt and took Memphis as its headquarters. The Kushite kings constituted the 25th dynasty and are regarded as the beginning of the sending dynasty. 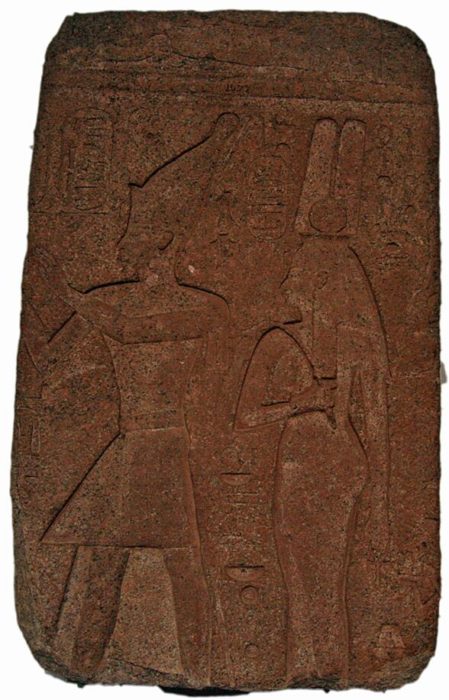 Several of the kings of the 22nd and 23rd dynasties had Libyan origins and Libyan names, such as Shoshenk and Osorkon. This relief from Bubastis shows Osorkon 2 and Queen Karoma in the 22nd dynasty.

The power of the Cushites was broken by two Assyrian conquests (in 667–666 and 664–6633 BCE), which drove them back to Nubia. The Assyrians appointed Nekho 1 and later his son Psamtek 1 from Saïs in the Nile delta to vassal kings. Assyria struggled at this time with internal problems and pressure from Babylonia. Psalm 1 took advantage of the situation and freed Egypt from the Assyrians and founded the 26th dynasty. With the help of Greek mercenaries he gained power over the petty rulers. He also gained control of the Amon priests in Teben by appointing his daughter Nitokris as priestess.

The 26th dynasty represented a new period of prosperity, where the kingdom was unified and stable. Both the 25th and 26th dynasties looked back to earlier times and copied the art styles especially from the old empire. Egypt was also able to keep control of the Levant for a short period under the successor of Psamtek 1, Nekho 2. At this time, Greek influence also began to prevail, and a Greek trading station was established at Naukratis in the Nile delta. 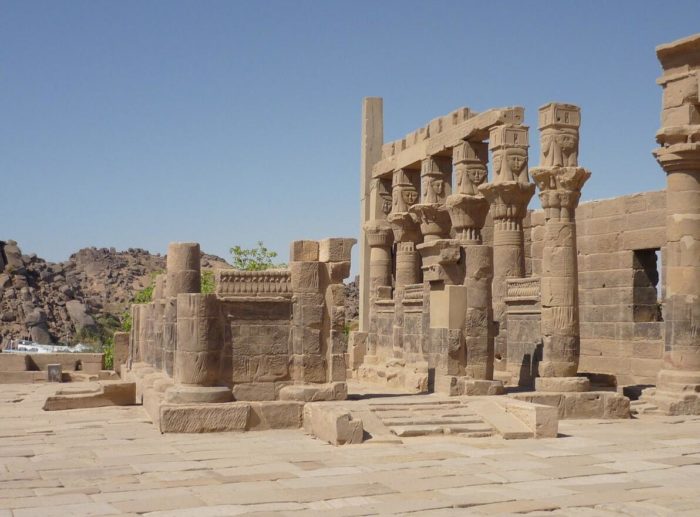 Egyptian kings were able to interrupt Persian rule for a short period of time. Nektanebo 1 ruled during this period and built several monuments, for example on Philae.

Persia gradually grew as the leading power in the Middle East and conquered both Lydia and Babylonia. The Persian king Cambyses 2 then conquered Egypt in 525 BCE, and the Persians remained in power in Egypt for two periods; from 525 to 404 and from 343 to 332 BCE.

As the Egyptian sources are relatively modest, we know little about the rule of the Persians in Egypt. According to later, classic sources, it was a brutal regime, but much may indicate that this was not the case. Presumably, the Persians interfered with Egypt’s interior conditions to a lesser extent than in other conquered areas. The Persian kings took over the pharaoh’s titles and his divine status. As they did not reside in the country, the daily government was left to governors and satrapers.

The Persian era was interrupted by a brief period in which Egyptian kings (the 28th-30th dynasty) managed to regain power over Egypt. Particularly well known among these kings are Nektanebo 1 and Nektanebo 2, both of whom were great builders. Nektanebo 2 eventually had to give back to the Persians.

Alexander the Great’s defeat of the Persian Empire and the conquest of Egypt in 332 BCE. began the Greco-Roman period in Egypt’s history. Alexander was welcomed as a liberator and was given traditional royal titles. He stayed in Egypt for only a short time, but made a lasting impression by founding the city of Alexandria. In his absence, Alexander assigned several administrators to govern Egypt.

Shortly before Alexander’s death in 323 BCE. became one of Alexander’s generals, Ptolemy, son of Lagos, satrap in Egypt. In 305 BCE. Ptolemy 1 took Soter king’s title, thereby establishing a Ptolemy dynasty, which lasted for 300 years. A total of 15 Greek-speaking kings bore the Macedonian name of Ptolemy.

During the first Ptolemies, the battle for the remains of Alexander’s kingdom was a central theme. A total of six wars were fought in Syria. Especially Ptolemy 1 – Ptolemy 3 made success. These kings were also great administrators, and under their leadership, Egypt experienced an economic and military upswing. The land became a grain chamber for neighboring countries and irrigation systems were improved. Alexandria became a trading center and headquarters for literature and science. The Ptolemies conducted extensive restoration activities and built several traditional Egyptian-style temples, including Edfu, Kom Ombo and Dendera. 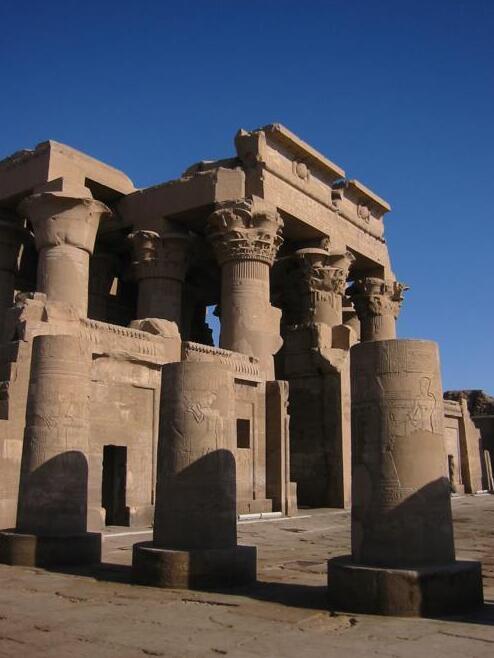 Eventually, the Roman Empire increased its influence on Egyptian politics. For example, Ptolemy 12 was reinstated with Roman help after being expelled from the throne by daughter Berenike.

Cleopatra 7, the last and most famous of the Ptolemies, managed to rebuild Egypt as a great power with the help of the Roman armies Julius Caesar and Marcus Antonius. Cleopatra eventually had to give up for Octavian ( Augustus ) in the year 30 BCE. When she died, Egypt became part of the Roman Empire.

The Romans had large troop concentrations in the country and held Egypt firmly. All attempts at rebellion were immediately turned down. South of Egypt, the kings of Meroë in southern Nubia perceived themselves as the rightful descendants of ancient Pharaohs. In the year 23 BCE they sent troops north and tried to penetrate Egypt. As a result, lower Nubia was expanded by Roman military installations that seemed to be a buffer zone to the south.

After consolidating its power, the Romans began repairing irrigation systems and streamlining administration. In no time, the Egyptian economy flourished again, and Alexandria became the most important trading town in the eastern Mediterranean.

The boom lasted well into the second century AD, however, the Romans pursued a policy of plundering, and all the money went to the Roman treasury. The Egyptians themselves were subdued. The temples were also placed under Roman control. While the cities flourished economically, the countryside suffered turmoil and peasant revolts.

When Diocletian became emperor in 284 AD, he tried to remedy the turmoil by dividing Egypt into three provinces. After his abdication in 305 AD, Egypt was reorganized once again. From 395 AD, the land was controlled from Byzantium.

Around the middle of the fourth century CE, Egypt had largely become Christian and the Egyptian temples were closed. The temple of Isis in Philae was closed by Emperor Justinian 1 as late as 550 AD. After Islamic armies forced the Byzantines out of Alexandria in 642 AD, Egypt became Arab.