With the collection of the kingdom under Ahmose 1, we count the beginning of the 18th dynasty and the beginning of the new kingdom. During this period, Egypt for the first time really expanded beyond Egypt’s natural borders, becoming one of the most important powers in the Middle East. 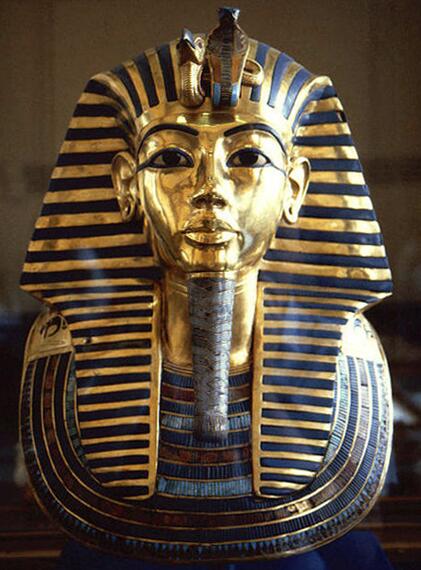 Tutankhamon moved the court back to Memphis after Akhnaton died. The picture shows Tutankhamon’s famous pure gold death mask inlaid with glass and precious stones. The Egyptian Museum in Cairo, 2002.

Thutmosis 1 really started the trend of imperialist politics. Despite his short reign, he managed to penetrate further into Nubia and the Levant than any previous king. With this, Egypt entered the big political arena with Mitanni (or Nahrina) and later the Hittite kingdom in Anatolia, Assyria and Babylonia, where it was to secure control of trade and political supremacy.

Particularly central was Pharaoh Thutmosis 3, who conducted several campaigns in Palestine and Syria to avoid the influence of Mitanni. Especially important was to gain control over the many urban and petty states in the Levant. The camps are described in the annals of Thutmosis found in the temple in Karnak. The military activity brought great wealth to Egypt in the form of war booty and tribute from the conquered territories.

Expansion was also important to the south. Nubia was again incorporated into Egypt, securing trade routes south and providing access to gold and other natural resources. Hatshepsut, one of the few female rulers in Ancient Egypt, resumed former trade contacts and sent an expedition to Punt, an area likely to be on the east coast of Africa.

Gradually, peace with Mitanni was established through diplomatic agreements and arranged marriages. Thutmosis 3 took three Syrian princesses to wives, and both Thutmosis 4 and Amonhotep 3 married princesses from Mitanni. In particular, the reign of Amonhotep 3 was marked by peace and diplomacy. An archive has been found in Tell el-Amarna, including the so-called Arzawa Letters, which illustrate the diplomatic contact between Egypt and the Middle East powers.

Perhaps the most famous pharaoh of the 18th dynasty is the Akhenaten (originally Amonhotep 4), known for his attempt to favor the sun god through the cultivation of the solar disc Athens. Among other things, he built a temple in Karnak and built a new capital in Upper Egypt, called Akhetaten (today’s Tell el-Amarna ). The period is therefore often referred to as the Amarn period. His religious reform was later considered a major step of error and was reversed when the king died. In the ensuing time, the country was in trouble. The successor Tutankhaten changed its name to Tutankhamon to mark the return of the old religion and moved the court to Memphis.

Ramses 1, an army commander of the last kings of the 18th dynasty, founded the 19th dynasty. During the Amarn period, the Hettite Empire had taken over Mitanni’s hegemony and was pushing hard to take over political control in the Middle East.

The successors of Ramses 1, Sety 1 and Ramses 2, conducted several campaigns in the Levant to regain Egypt’s influence and regain important small states from Hittite control, especially Amurru and Kadesh. The period was marked by both victories and losses, but largely Egypt managed to maintain its political hegemony. During Ramses 2, a peace agreement was finally concluded with the Hittites.

An extensive monumental building was run, including Memphis a new heyday as headquarters and Ramses 2 built a brand new headquarters in Pi-Ramses in the Nile delta. Other well-known buildings include the expansions of the temples of Luxor and Karnak and Ramses 2’s rock temple at Abu Simbel. Interest in one’s own past also flourished; the old pyramid plants were restored, and earlier literature was copied. New literature was also produced.

Egypt became international in other ways as a number of different peoples settled in the country. Towards the end of the period, pressure from the outside became stronger and stronger. Ramses 2’s successor, Merenptah, had to fight hard battles to prevent Libyan tribes and the so-called seafarers from penetrating the Nile delta. In a stele erected by Merenptah, now in Cairo, Israel is mentioned for the first time as a group of people. During Ramses 3 in the 20th Dynasty, Egypt was once again threatened by the seafarers. Ramses 3 managed to fight back the invasion of the first known sea battle in history.

Under the successors of Ramses 3, all named Ramses, the king’s power crumbled. This was partly due to economic decline and constant attacks by Libyan tribes, especially in Teben. In addition, the priesthood of Amon in Teben put on a lot of wealth and great properties. The priests of Amon eventually took ruler titles and through the oracles of the god a kind of theocracy developed. This split period began the third transition period. 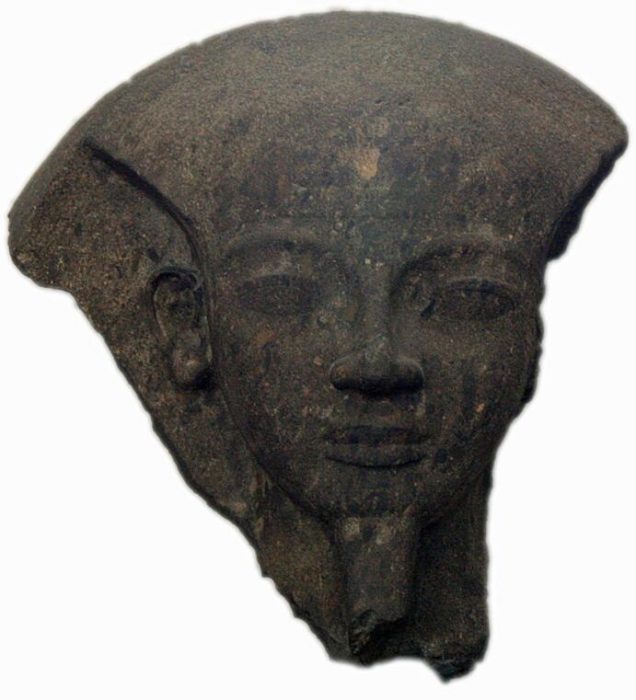 The last kings of the 20th dynasty, all named Ramses, gradually lost power over the kingdom. This is a fragment of Ramses 6’s sarcophagus from the Valley of the Kings.

When the last King of Ramses in the 20th Dynasty died, Smendes, a king of unknown origin, formed a new dynasty (the 21st Dynasty) in Tanis in the Nile Delta. Parallel to this dynasty, the dynasty of the priests of Amon and the theocracy in Teben continued. The Amon priests recognized the Tanis kings, but in practice had control over Upper Egypt. The kings of the 21st dynasty built a large temple to Amon in Tanis, as a northern counterweight to Teben. The temple was largely built with recycled materials from Pi-Ramses, the main seat of Ramses 2.

Libyan military leaders (probably descended from Libyan prisoners whose Ramses 3 had settled in Egypt) eventually came to play an increasingly important role. When the last king of the 21st dynasty died without a descendant, Sheshonk 1, a Libyan army commander from Bubasti, founded the 22nd dynasty. The 22nd and 23rd dynasties are called the Libyan, and royal names from the period reveal Libyan origin (Sheshonk, Osorkon, Takelot). Sheshonk managed to revive the greatness of the past through a successful campaign in the Levant for a short period of time. This episode is also featured in the Bible, where Sheshonk is known as Shishak.

Sheshonk’s successors in the 22nd dynasty were not as strong, and with Pharaoh Sheshonk 3, the end of a united Egypt. Several petty rulers disbanded, and in the Nile delta two fragmentary dynasties (the 23rd and 24th dynasties) emerged, partially overlapping with the 22nd dynasty.