During the first transitional period, Memphis had ceased to serve as the seat of the central administration and Egypt was divided. This makes the chronology of the period somewhat obscure. Later literature from the Middle Kingdom often portrayed the period as chaotic with anarchy and distress. However, the districts appear to have increased wealth.

The local governors had gained more power and more ruled as kings over their districts. A good example of a local ruler is Ankhtifi who ruled in Hierakonpolis. In an autobiographical inscription from his tomb in El Moalla, he describes how he led a campaign against Teben and intervened in the rule and care of Edfu.

In Lower Egypt, a number of relatively weak kings (considered the 9th and 10th dynasties) ruled from Herakleopolis (today the village of Ihnasya el-Medina). Little is known about these kings as there are few archaeological remains from Herakleopolis. Most of what is known is from references in the autobiographical inscriptions to the local rulers of Asyut who were loyal to these kings. 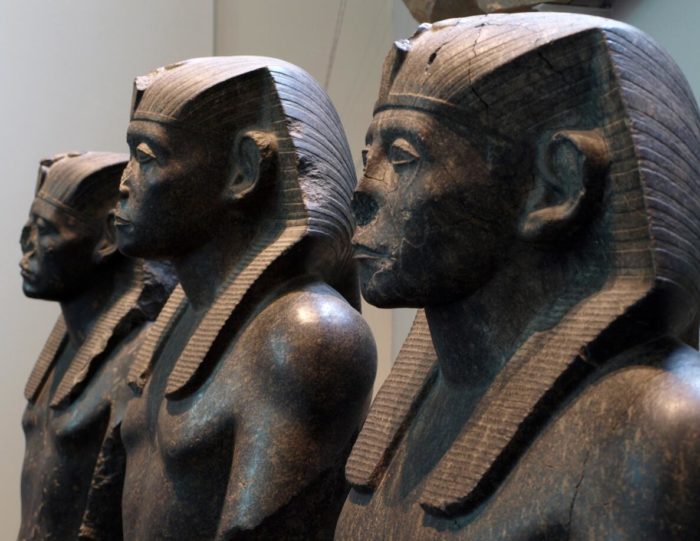 The most significant king of the 12th dynasty was Senuseret 3, which expanded far into Nubia.

The collection of the kingdom under Mentuhotep 2 is often regarded as the beginning of the middle kingdom. However, the subsequent kings of the 11th dynasty were not as strong as Mentuhotep 2, and an official named Amonemhet founded the 12th dynasty. With Amonemhet 1’s new dynasty came a new boom for Egypt.

To mark the affiliation of former heyday, the king moved the headquarters from Teben to a whole new city in Lower Egypt, Itj-tawy. This city was not found, but was probably located at Lisht in Faiyum where Amonemhet built a pyramid. In later literature of wisdom, the teachings of Amonemeth 1, it appears that the king was killed, presumably in a coup d’état. Despite this, the kings of the 12th dynasty were able to consolidate the central power, including by tightening up the nome system and by often assigning the heir to the throne while the king was alive. Lower Nubia again came under Egyptian influence and trade picked up.

The most prominent king of the 12th dynasty was Senuseret 3, which expanded far into Nubia. With its wealth of gold, copper, gemstones and quarries, Nubia was of great economic importance. Egypt’s southern border was moved past the 2nd cataract, to Semna in today’s Sudan. In this area, several forts were constructed to control traffic on and near the Nile.

Syria and Palestine also came under Egyptian influence through extensive trade. This is especially expressed in the annals of Amonemhet 2 found in Memphis. However, Egypt did not have political control over the area, although the annals mention several campaigns against the Levant. From references in the story of Sinuhe, we know that a defense force also existed against the Levant, known as the Wall of the Ruler.

The wealth was reflected in extensive construction activities and all the kings of the 12th dynasty built pyramids at Lisht, Lahun, Dashur and Hawara. The king’s power was constantly strengthened, but the view of the king also changed. While the King was formerly the Exalted God King, in the literature of wisdom he was now considered “shepherd” for his people. The period was also marked by a rich literature.

The subsequent 13th dynasty was relatively stable, but weak. A total of 70 different kings sat on the throne during the period. With ever-increasing administration, power was slowly transferred to the bureaucracy. Possibly, an increasing number of immigrants from the Levant also contributed to weakening central power. The Nile’s delta was gradually densely populated with foreign peoples. 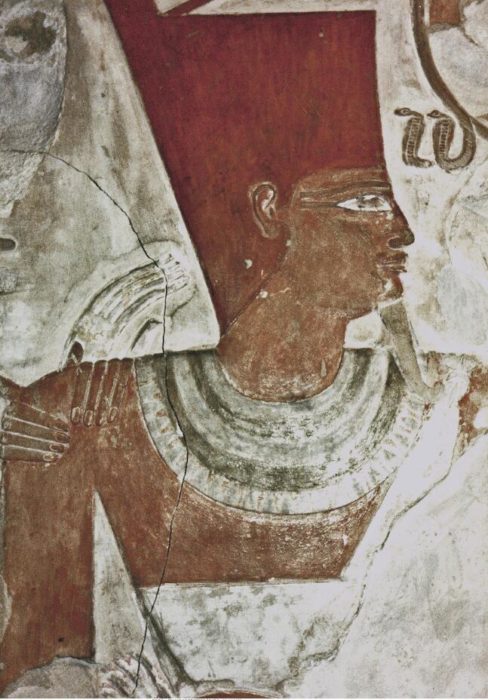 Mentuhotep 2 in the 11th Dynasty was able to reunite Egypt and began the Middle Kingdom.

With the weakening of the 13th dynasty, Egypt’s second transition period began. The country was divided, and rival dynasties fought for power. A special feature of the period was the so-called Hyksos kings (from Egyptian heqa khasut, “chief of foreign lands”) who gradually gained greater power in the Nile delta, especially in Avaris (at the modern village of Tell el-Daba).

The Hyksos phenomenon is still not fully understood. Excavations in Avaris reveal a material culture with strong similarities to Palestine, especially in tombs where Palestinian pottery and donkey burials have been unearthed in Egypt. However, titles of officials show that the Hyksos kings must have had an Egyptian pattern.

The political picture in the period is complicated. The 14th Dynasty was a little known dynasty, probably in the Nile delta, while the 15th Dynasty (Hyksos) ruled the eastern part of the Nile delta. Partly parallel to these, the 13th dynasty was still in Itj-tawy. The so-called 16th dynasty is an artificial name for another little known dynasty. Later, the 17th dynasty emerged in Teben. An inscription from Kamose in the 17th dynasty reveals that there was a kind of boundary between the kings of Teben and the kings of Hyksos at Cusae in Upper Egypt.

The 17th dynasty gradually took up the battle against the Hyksos kings. Sekenenra Tao built a fort at Deir el-Ballas with a good view of the Nile. The mummy of this king shows that he was probably killed in battle. The war continued under the successors of Kamose and Ahmose 1, and the latter finally succeeded in expelling the Hyksos kings. Ahmoses campaign is known through the autobiographical inscription of the commander Ahmose son of Ibana.