The unification of Egypt in the Late Predynastic era was further developed by the kings who are considered the first two dynasties. According to Egyptian tradition, Memphis (near present-day Cairo ) was used as a capital by the early kings. No early dynastic monuments exist in Memphis today, but geological studies have revealed traces of pottery from that time.

Although the first dynasties lasted a long time, there are no written sources to illuminate the period. Most of our knowledge of Egypt in the early dynasty stems from excavations in tombs, especially in Sakkara where the elite were buried, and in Abydos where the kings were buried. Important royal names from the 1st dynasty are Djer, Djet and Den. From the 2nd dynasty we know among others Khasekhemwy and Peribsen. 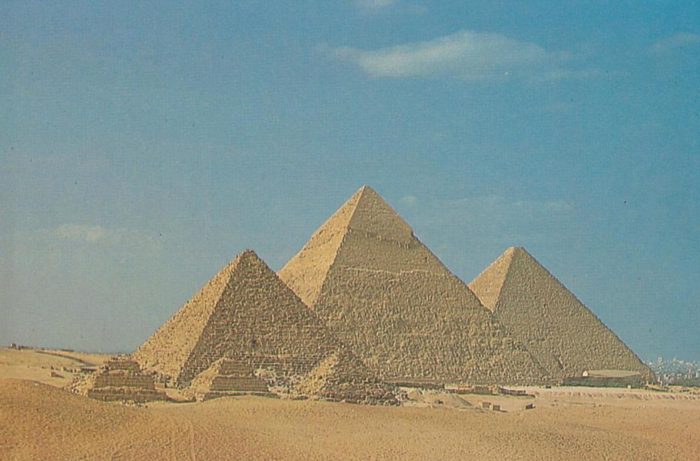 The ancient kingdom is characterized by the construction of pyramids. The three great pyramids at Giza outside Cairo from the 4th Dynasty are the best known. To the left, Menkauras’ pyramid, with three small pyramids in front. In the center is the pyramid of Khefren, and to the right the largest, the Kheop Pyramid.

A key element of the kingdom that developed during the early dynastic period was the emphasis of the king as a divine incarnation of the false god Horus, and the belief that the god king secured Egypt’s prosperity. This is particularly manifest in a stele of King DJET time from Abydos, where the king’s name is written in a palace shaped cartouche which is guarded by Horus.

Another important advance in the early dynastic period was the development of a written language. This made it possible to carry out large administrative tasks, such as tax collection. Longer texts are found first from the Old Kingdom, and written sources in the early dynastic period are largely confined to titles and shorter forms. However, labels with hieroglyphs and royal seals on clay jars show that some kind of administration must have been developed already during this period.

The 3rd Dynasty marks the beginning of the Old Kingdom. During this period, the king’s power was further consolidated and there was a violent boom. This is particularly evident through the impressive pyramid plants. The transition from the early dynastic period to the old empire was not a dynastic break, but a smooth transition.

Djoser was the first king of the ancient kingdom and the most famous king of the 3rd dynasty. Djoser was responsible for the construction of the first pyramid, the so-called staircase pyramid in Sakkara. This is the world’s oldest large stone building and was a pioneering architectural work. Several of the other kings of this dynasty also tried to build pyramids, but these are to a small extent preserved.

The 4th Dynasty was the pinnacle of the pyramid construction and it is during this period that the real pyramid with smooth sides arose. The development of the real pyramid, with trial and error, can be traced in the three pyramids built by Snofru in Meidum and Dahshur.

Most famous are the pyramids of Snofrus’s successors, Kheops, Khefren and Menkaura, in Giza. The Kheop Pyramid is the largest of all the pyramids, and is arguably one of the most famous buildings of ancient times.

The pyramids had a dual function as the king’s tomb and as a symbol of the king’s power and connection with the sun god Ra. The association between the king and Ra was further emphasized by the title said Ra (“son of Ra”) used by the 4th Dynasty.

The economic significance of the pyramid construction can hardly be exaggerated. The pyramids must have created a huge need for both materials and manpower. As labor, slaves were probably not used, but rolling labor teams of farmers and workers, so-called counties. In Giza, a settlement was found that was probably used by the workers. A building with oblong rooms can be dormitories. Another building was probably used as a bakery to make food rations for the workers.

The pyramid building also placed great demands on a well-functioning administration. The chief officials around the king were often from the royal family. An example is Hemiunu, Khufu’s visor and relative. Like all other senior officials during this period, he was buried in a tomb of tombs close to the king’s pyramid.

Egypt was still relatively isolated in the international context and remained largely within the natural boundaries of the Nile Valley. However, Palermosteinen mentions that Snofru conducted a military campaign in Nubia and sent a trade expedition to the Levant. Traces of an Egyptian settlement and trade outpost have been found at Buhen in Nubia, and royal inscriptions from Sinai show that attempts were made to extract Malachite and turquoise.

In the 5th and 6th dynasties smaller pyramids were built and with poorer quality materials than the previous pyramids. This may have happened as a result of a weakened economy following the extensive pyramid construction of the 4th Dynasty.

Another explanation is that there may have been a religious change. As the pyramids became smaller, the temple associated with the pyramid became larger and more complicated. Starting with Unas, the last king of the 5th dynasty, the chambers of the pyramid were decorated with the so-called pyramid texts. These are a number of religious texts which linked the king to Ra and Osiris and which were to secure the king’s journey to the realm of death.

In addition, several of the kings of the 5th Dynasty chose to build temples dedicated to Ra. The temples of Userkaf and Niuserra are preserved, and consist of a temple built around a large obelisk, an important sun symbol.

The 6th dynasty shows some signs of a dynasty with weaknesses. The biographical inscription of Officer Weni mentions what may have been an attempted coup against Pepi 1. The control over the kingdom appears to have seriously crumbled towards the end of the long reign of Pepi 2.

The reasons for the decline were many. The development of a strong state administration, in which senior officials were recruited from wealthy families, reduced the king’s power. This is visible in the elite tombs of the 5th and 6th dynasties, which are more detached from the king’s pyramid than in the 4th dynasty. In the 6th dynasty, the governors of the districts (nomads) also begin to build tombs locally, for example at Meir and Deir el Gebrawi.

At the same time, problems with controlling the Nile and the decline in foreign trade led to a collapse in the economy. Especially decisive was that Egypt lost influence in Nubia. Eventually, the entire infrastructure collapsed and the central power collapsed.

The descendants of the 6th Dynasty (7th and 8th Dynasties) had little influence over the Memphis area. Some reckon these dynasties to the first transitional period, rather than to the Old Kingdom. 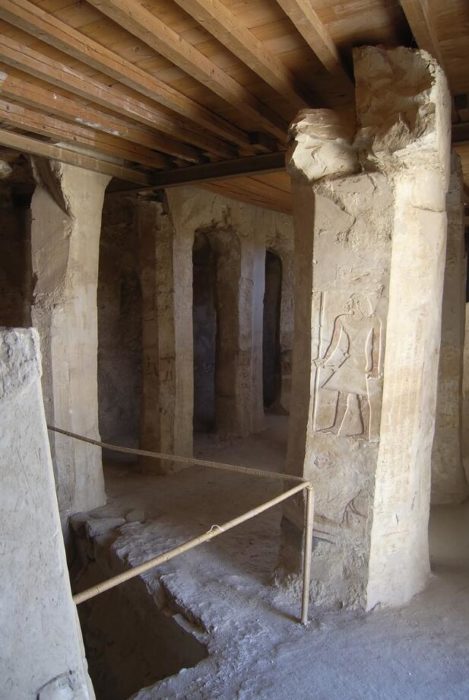 During the first transitional period, several of the local governors disbanded, such as Ankhitfi in Hierakonpolis. This picture shows his tomb in el-Moalla.