Modern fiction, written in French, first began to gain attention at the time of independence (1958) but is based on an old and rich oral storytelling tradition. West Africa’s griots, professional storytellers, are well known as mediators of oral heritage. The two most renowned authors, Camara Laye and DT Niane, have used the stories of griot narrators: Laye in “Le Maître de la parole” (“Master of the Word”, 1978) and Niane in “Soundjata; ou L’Épopée Mandingue ”(‘Sundiata; or the Heroine Poets of the Mandingine People’, 1960), novels based on stories of the imperial era of Mali. Characteristic of both authors is their connection to the non-degree idea. Laye’s most notable novel is the multi-faceted “Le Regard du Roi” (‘The King’s Eye’, 1954). Among Lay’s successors is Williams Sassine. 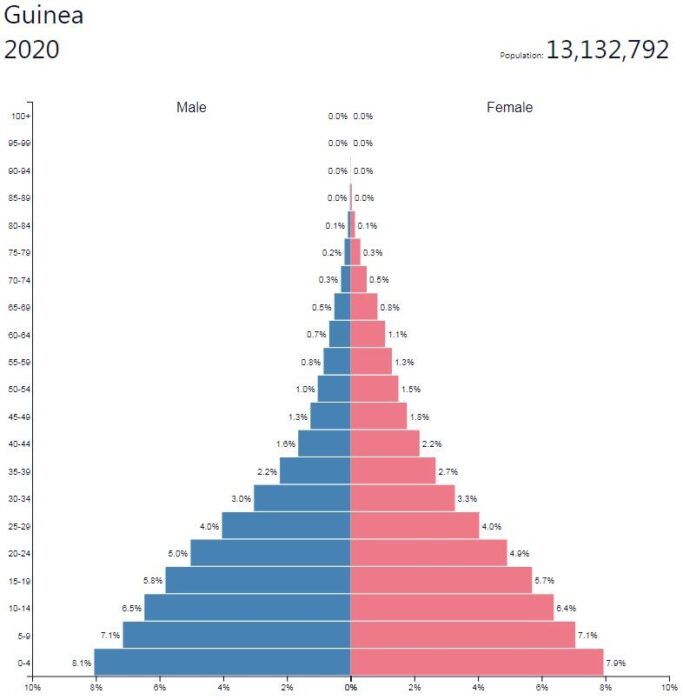 Although the population group bakes in terms of population is a small group in Guinea, their art is known. Particularly prominent is their impressive large wooden dance mask, d’mba, which is characterized by being worn on the dancer’s shoulders in various ceremonies. The baggage culture also produces other masks and sculptures with a similar design language. These mainly depict snakes, crocodiles and birds with anthropomorphic traits. Similar masks and sculptures can be found in the nalu, mmani and landuma groups.

Indigenous art and handicraft have long been influenced by Islamic culture, and as a result, it is less common today to find figurative sculpture in many of the people of Guinea. Among the fulani people is a prominent production of jewelery, metal and leather work.

The practice of music in Guinea is necessary in both religious rites and social interaction. Vocal elements with instrumental accompaniment form the basis of poly-rhythmic and multi-part improvisation, where alternate singing prevails and where dance embodies musical experiences. Both Muslim and later Western music have influenced the domestic music tradition. A rich flora of instruments, especially stringed instruments and trumpet and pipe-type wind instruments, are examples of Muslim influence. In popular music, Western electronic instruments convey centuries-old traditional features. The legacy of the griot tradition is still strongly reminded. The xylophone instrument ballafon is a central instrument whose sound is also sought by many of the country’s guitarists.

Despite political repression and poor economy, music life flourished during the 1960’s and 1970’s, partly as a result of the regime’s support for culture. Among the many popular dance orchestras that played folk-inspired material on Western instruments, Bembeya Jazz is the most famous. Syli National Orchestra, with guitarist Papa Diabaté, developed a Guinean variant of rumba, which spread across the country. Another successful group was Balla et ses Balladins. In parallel, dance groups existed that performed for percussion accompaniment; one of the most famous is Les Ballets Africains.

After the death of dictator Sekou Touré in 1984, the conditions for the country’s musicians changed and the big orchestras disappeared almost completely. Many of their vocalists, however, started successful solo careers, including Kerfala Kanté, Mory Djeli Deen Kouytaé, Sekouba Bambino (born 1964) and Oumou Dioubaté (born circa 1964), who made her breakthrough since moving to Paris in the late 1980’s.. Another of the many musicians who went into exile is Mory Kante, who in 1987 received a world hit with “Yé ké yé ké”, an example of how traditional music has been given a modern soundscape. Kante is also one of those who use traditional instruments in his music. This has also become a trend among younger musicians, e.g. the Les Espoirs de Coronthie group.

The dominance of musicians from griot families has in recent decades been challenged by artists with fulani backgrounds, including Amadou Barry, Binta Laly Sow, Sekouba Fatako (dead 2011) and Lama Sidibé (born 1965). Reggae and hip hop have also become important music styles in the country, with rapper Bill de Sam as perhaps the best known name.