Within the narrow coastal plain of the Republic of Congo, which does not exceed 90 meters above sea level, a number of parallel steep ridges, the Mayoumbé mountains, rise with a height ranging from 500 to 800 meters. Northeast of these mountains lies the Niari basin, which is the country’s best agricultural region, around the Niari River. The Batéké Plateau north of the Niarid Valley forms the watershed between the rivers that flow towards the coast and those that flow towards the Congo Basin. The average height of the plateau is approx. 600 meters above sea level, with a decreasing height to the south, where the plateau forms a steep sandstone edge towards the Congo River.

To the northwest, the Batéké Plateau passes into the Chaillu Mountains, forming the watershed between the Niarid Valley and Ogooué that flows through Gabon. The country’s highest mountain, Monts de la Lékéti (1040 m asl), is close to the border with Gabon. The northern half of the country belongs to the Congo Basin and consists of flat, often marshy valleys; partly the Congo river valley and partly the valleys along the bee rivers, the most important of which are Oubangi and Sanga. The beehives are separated by low ridges with a direction northwest-southeast. West of Oubangi there is an approx. 150 km wide swamp area.

The country is in the tropical zone and has essentially an equatorial climate. The annual rainfall varies from approx. 2000 mm to the north, to approx. 1400 mm in Brazzaville and to 1250 mm in Pointe-Noire on the coast. There is a marked dry season from June to September. Temperatures are high throughout the year, and annual variations are relatively small everywhere. The cool Benguela current causes somewhat reduced coastal temperatures during the winter months (June – September).

Plant and Wildlife in the Republic of Congo

Tropical rainforest covers most of the country, along the coast there are some mangroves, and in some areas inland savanna with tall grasses. The vascular flora probably comprises more than 4000 species. Characteristic trees in the rainforest are limba, liberia cherry, Sacoglottis gabonensis, and no or African oak, Lophira alata. In addition, many species of pea flower family exist, e.g. Cynometra hankei and mahogany trees. Most of the species in the original forest are woody. After clearing, fire and other disturbances comes a secondary vegetation rich in herbs and grasses.

The mammalian fauna includes more than 200 species. Elephants, western lowland gorillas, chimpanzees, hyena dogs and oyster mice are considered endangered. Hippopotamus, coffee buffalo, antelope and brush are common, while lions have become rare. On the savannah are giraffe, cheetah and striped jackal. The rainforest has many monkeys, i.a. the colorful and large baboon species mandrill, guereza, pennant and satan colobus. More than 720 bird species are registered. Characteristic families include Turaco, horn, ice, sun and weaver birds. The parakeets include known species such as jackal, red pan and dwarf parrots. 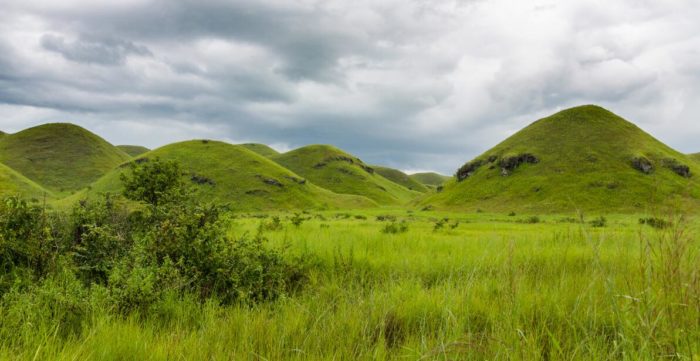 The Republic of Congo is 342,000 square kilometers and has a short coastline to the Atlantic Ocean to the west. The most important port city, Pointe-Noire is the country’s second largest city. The capital, Brazzaville, is further inland, along the Congo River, directly above the Democratic Republic of Congo’s capital Kinshasa.

Much of the Republic of Congo is made up of forests, and therefore quite sparsely populated. The country is one of Africa’s most urbanized. The major population centers are Brazzaville and Pointe-Noire, a large proportion of the population who do not live in these cities, living along a railway line between these cities.

The rainforest that extends over large parts of the country is part of the Central African Equatorial Rainforest. The equator traverses the Republic of Congo, ensuring a stable climate all year round. Although the Congo rainforest is large, it is under pressure, both from farmers who need land and woods, and from commercial timber operations. Like the primeval forest, the rainforest is home to a number of special animals and insects, many of which are considered endangered.