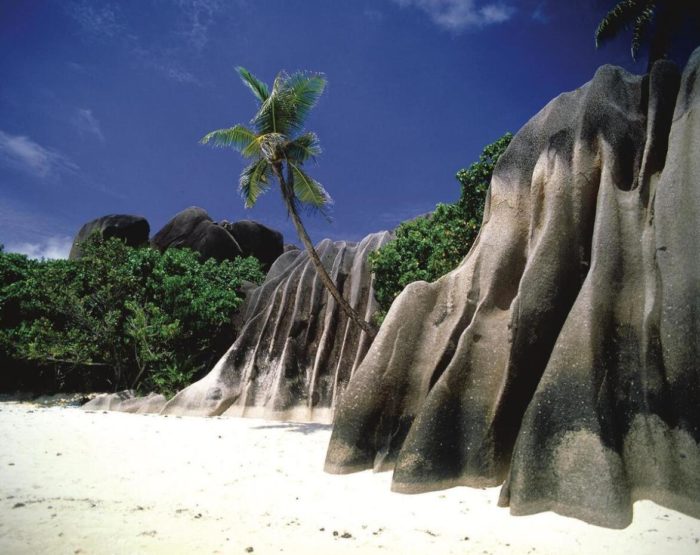 Seychelles. Tourism is the main trade route in the Seychelles. The archipelago has many fine beaches and a tropical climate. Here from the island of La Dique.

Seychelles consists of two archipelagos. The northern central group is made up of granites and is characterized by narrow coastal stripes with bright, beautiful beaches that surround a more high inland. The highest point is 906 m ohh on Mahé. The second, more peripheral archipelago consists of 83 low coral islands. Many of these islands lack water.

The Seychelles have a tropical climate with small seasonal variations. During the period December-May the weather is mostly hot and humid, in June-November a little cooler due to the southeast passage. The annual rainfall varies somewhat between the islands, on the largest island of Mahé it is approx. 2300 mm. The average temperature is approx. 27 ° C. The islands lie outside the cyclone belt.

Plant and wildlife in the Seychelles

Plant life has most in common with Madagascars. Famous is the seycell palm, with its huge, characteristic fruits coco de mer. This species was in danger of extinction, so the island of Praslin was protected as early as 1890.

The fauna is associated with the Ethiopian region (Madagascar) and the Oriental, and has a high proportion of endemic (native) species. These include: 2 bat species, 12 bird species, 2 snake species, aldabrak giant turtle, 7 worm toad species, 4 frog species and many land snail and beetle species. Europeans exterminated the archipelago’s crocodiles and sea cows, and introduced pests such as rats and cats. Bats are the only native mammals. The reptile fauna includes giant turtles, some lizard species (including a chameleon) and two species of beasts. More than 200 bird species have been observed. The more than 50 species that breed on the islands include: the Seychelles Falcon, the Seychelles Parakeet and the Black Wasp Parrot chosen for the country’s national bird. Many seabirds, including tropical birds, soles, frigate birds, soot and rosettes, and nodules. There are more than 2500 coral species. 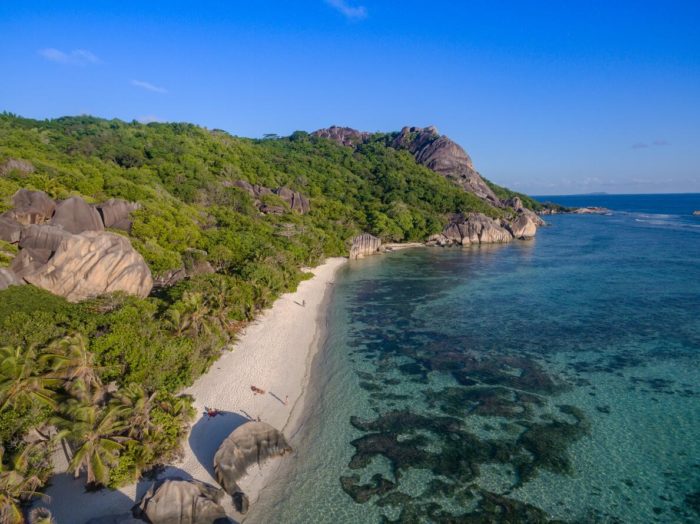 The northern and central 45 islands consist of granite with a high inland bordered by the sea of ​​low and bright beaches. The highest point is Morne Seychellois, 906 meters above sea level at Mahé. The other 109 islands are low coral islands with more peripheral location; many of these lack water and are without permanent residence.

The climate is tropical and humid with little variations throughout the year. In Mahé, the temperature varies from 24 o C to 30 o C and the rainfall varies from 2900 to 3600 millimeters per year. The rainfall is greatest from November to March. The other islands have somewhat less rainfall.

In the Seychelles there are several special palm species, including the Seychelles palm tree with nuts of a striking shape; these (coco-de-mer) are the world’s largest seeds and have been nicknamed ‘love nuts’. There are 75 endemic (native) plant species.

The Seychelles are known for a large number of endemic animal species. Bats are the only living native mammals. Europeans introduced cats and rats that exterminated several species, and even exterminated the crocodiles and cows.

More than 200 species of birds have been recorded, including Seychelles Parakeets, Vasap Parrot (National Bird), Paradise Flybirds and Seychelles Falcon. Seychelles has some of the largest seabird colonies, including boobies, noddy, frigate birds and tropikfugler.

Giant tortoises are found in large quantities on Aldabra and other islands. There is one chameleon species and three snake species. There are seven species of worm toads, six of which are endemic. Five out of six frog species are also endemic.

In the waters around the islands there are more than 1000 species of fish and many coral species.