The bedrock can be divided into three regions: In the northern limestone mountains, in the central parts of Nubian Sandstone and in the south Precambrian granite and syenite.

The desert consists of a low plateau, formed by sedimentary rocks, rarely exceeding 300 meters above sea level. and rather weak to the north.

The Eastern Desert (Arabic: al-Sahra al-Sharqiya ) extends eastward from the Nile to the Gulf of Suez and the Red Sea. It consists of a desolate plateau area up to 2187 m high (Shayib al-Banat), rugged ridges facing the Red Sea coast.

The inhabited and cultivated part of the country – the real Egypt – encompasses the Nile Valley, the Nile Delta and the oases, and amounts to only 35 600 km 2. The Nile Valley consists of a 5–15 km wide valley that the Nile has dug over time.

The Sinai Peninsula is separate from the rest of Egypt by the Gulf of Suez. To the southeast it is bounded by the Arabian peninsula of the Gulf of Aqaba. The northern part of the peninsula forms an irregular plateau, which slopes towards the Mediterranean. To the south, the Sinai Mountains rise to over 2000 meters above sea level. ( Jabal Katrina 2642 masl). The mountains consist of volcanic and metamorphic rocks, and descend steeply towards the coasts.

Egypt has flat landscapes covered by alluvial sediments. Elevation areas in the north and south. In northern limestone mountains, in central parts of Nubian Sandstone and in south Precambrian granite and syenite. Gravel and sand cover are common as the Libyan desert extends into the southwest corner.

Egypt is located in the northeast corner of the African Shield. During the Jurassic period, NØ-SV fault basins were formed along the edge of the Tethys Sea and NS fault basins in southern parts of Egypt. Erosion of the altitude areas in the south resulted in sediment transport north and out into the Mediterranean during the Cretaceous period. The sea rose, and towards the end of the Cretaceous period dolomite was formed in northern parts of Egypt. The Jura Lagoon was squeezed and inverted as the African Shield collided with Laurentia. Continued rising sea levels in the Tertiary period gave anoxic bottom conditions and formation of black slate.

Throughout the Tertiary period, the sea level dropped, and Egypt was subjected to great fault activity. The Suez Canal was formed as a fault pool. Frequent changes in sea level and high fault activity towards the end of the Tertiary period developed local sedimentation basins with either clastic material or pooled salt basins. Today, oil is found especially in the Nile Delta.

Gold mining has probably been commonplace, and gold exists today. There are also deposits of copper, iron and lead. Emerald is found at Mount Zabara, and the eastern desert also has deposits of jasper, agate, chalcedony and rock crystal. 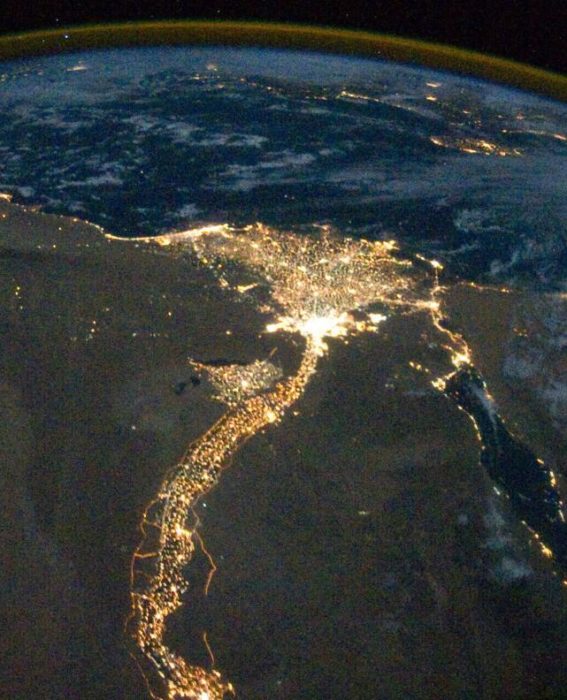 The significance of the Nile as both a road wound and for access to water for agriculture has had a major impact on the population pattern in the area the river flows through. Here is the Lower Nile, the Nile Delta and the outlet of the Mediterranean seen from space at night, where electric lights clearly show how the river has created opportunities for settlement.

Egypt is located in the subtropical desert belt. Except for a narrow coastal strip along the Mediterranean, which receives up to 200 mm of rainfall in the winter months, nowhere can a completely fixed annual rainfall be expected.

The annual rainfall decreases from approximately 180 mm in Alexandria and 80 mm in Port Said, to approximately 20 mm in Cairo. South of Asyut, years can pass between each time it rains. The weather is very stable, with two clearly defined seasons: the hot summer from May to October, and the cooler winter from November to April. Temperatures are rising from north to south. In Alexandria, the average temperature for the coldest month is 14 ° C and for the warmest month is 27 ° C; the corresponding figures for Aswan are 17 ° C and 34 ° C. In the spring it often blows a powerful, fiery and dusty son wind, the so-called khamsin, which can do great damage to the crops.