Eritrea is a new independent state in one of Africa’s most strategically and politically and militarily most turbulent regions: the Horn of Africa. Already a few years after the country’s independence in 1993, there was a strained relationship with neighboring countries, especially Ethiopia and Sudan, but partly also Djibouti and Yemen on the other side of the Red Sea ; later also Somalia.
The Eritrean liberation movement was allied with the forces that simultaneously took power in Ethiopia, but the close relationship between the two countries gradually weakened throughout the 1990s until the 1998-2000 war. Eritrean authorities have supported military rebel groups in Ethiopia, as part of efforts to undermine Ethiopian influence in the region.

Sudan was also an important supporter of the EPLF during the liberation war, but the relationship between independent Eritrea and Sudan was quickly strained. The reason was the attack in Eritrea by Eritrean Islamic Jihad from 1993. Eritrea accused Sudan of training the militia. Sudan, in turn, accused the Eritrean government of training Sudanese rebels at bases in Eritrea. Eritrea broke diplomatic relations with Sudan in 1995, and the conflict was further tightened the following year when the Eritrean government transferred the Sudanese Embassy building in Asmara to the Sudanese National Democratic Alliance (NDA) in 1996. 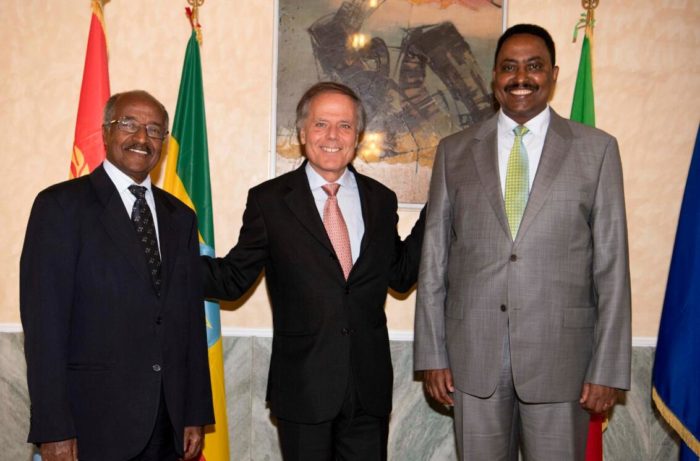 In 1999, the embassy was returned to the Sudanese government, and diplomatic relations were restored. During the war between Eritrea and Ethiopia, Sudan strengthened its connection with Ethiopia and allowed Eritrean opposition to operate in Sudan. But the mutual accusations continued, including with the Sudanese accusations in 2003 that Eritrea supported the rebels in Darfur province. The relationship between the two countries has subsequently improved.

In 1995, a serious conflict with Yemen developed over the rights of the Hanish al-Kabir archipelago in the Red Sea. After unsuccessful negotiations, Eritrean forces attacked the islands in December 1995, leading to fighting with Yemeni forces. Following international mediation, Eritrea had to return the islands to Yemen in 1998; Eritrea retained some of the smaller islands. The same year, the diplomatic relations between Eritrea and Djibouti were broken, partly because Eritrea believed that Djibouti supported Ethiopia in the Eritrean-Ethiopian war. At the same time, Djibouti accused Eritrea of ​​supporting the Afar-dominated rebel movement in the country.

Diplomatic relations were restored in 2000, but new conflicts arose, especially when Eritrea in 2008 established military fortifications at the border – on the Djibouti side – and troops from the two countries supported each other. The UN Security Council ordered Eritrea 2009 to withdraw and the two countries resolve the border dispute, but Eritrea did not comply. A ceasefire agreement was negotiated by Qatar in 2010, which also placed peacekeeping forces along the border.

Despite Israeli support for Ethiopia, the Eritrean government began contact with Israel in 1992. This did to some extent weaken relations with Arab states, but was a mark of Eritrea’s independent foreign policy. During the border war, Israel wanted to maintain a good relationship with both parties. Eritrea also established links with Libya. In addition, close relations have been established with the United States and several other countries, including the Nordic countries – although several have reduced or suspended their assistance to Eritrea due to a lack of democratic development.
Eritrea offered the United States to use the country in the fight against international terrorism, and participated in the coalition forces in Iraq. The United States had a radar base in Eritrea while the country was still part of the Ethiopian empire, and in the 1990s saw Eritrea as part of a strategic axis from the Horn of Africa to Central Africa. Relations with the United States have been weakened as a result of Eritrea’s support for the Somali rebel forces and the breach of the UN arms boycott of Somalia. The UN has also introduced an arms embargo on Eritrea due to the country’s role in Somalia and the conflict with Djibouti.

In 1991, Eritrea offered to mediate in the civil war in Somalia, as well as to send a peacekeeping force there. While Ethiopia has intervened militarily in Somalia, including with US and AU support, Eritrea is accused of undermining attempts to settle the war in Somalia – also by supporting a Somali militia fighting the Ethiopian-backed Somali transition government. Both Eritrea and Ethiopia are accused of breaking the UN arms embargo on Somalia. Eritrea, along with other countries in the region, also participated in mediation efforts to settle the civil war in Sudan.
In 1992, the EPLF sought to help bridge the growing gap between warring groups in Ethiopia; later, according to Ethiopian authorities, the Eritrean government supported opposition groups from the Oromo and Somali people. In 2004, Ethiopia, Sudan and Yemen accused Eritrea of ​​stirring up instability in the region.

The Yemen crisis of 2014 helped strengthen Eritrea’s position as involved parties saw the benefits of the country’s ports. Eritrea expressed support for the Saudi Arabian-led coalition, which in turn led to the signing of a security agreement between Eritrea, Saudi Arabia and the United Arab Emirates, and the United Arab Emirates investing heavily in building the port of Assab. These alliances also led Eritrea to break cooperation with Qatar (which was pushed into the cold by Saudi Arabia in 2017), and in 2017 Qatar withdrew all its peacekeeping forces from the border areas between Eritrea and Djibouti.