Among the non-political events that occurred under the reign of Ptolemy XI Aulete, the discovery made in 72 by a sailor, Ippalos, of the monsoons should be remembered. Aulete sought the friendship of the Romans and managed to be recognized as an ally, an ally so little authoritative that, when in 58 Clodius had the annexation of Cyprus decreed, he did not raise any opposition and protest. Then the Alexandrians dethroned him. Aulete found protection in Rome and later refuge in Ephesus from where, with the help of Pompey, he was able to act on Gabinius, governor of Syria, who put him back on the throne. Aulete died in 51, leaving the crown to his son Ptolemy XII who was thirteen and to his sister and wife who was 17.

Intolerant of Cleopatra’s predominant personality, Ptolemy XII had taken refuge among the Arab tribes of the east and was gathering an army in Pelusio to drive her out of Alexandria and seize power, when Pompey presented himself to him to ask him for hospitality and help: it was instead murdered by treason. Caesar reconciled the royal couple, but, while Cleopatra, including all resistance useless and vain, tried to save herself and the country by resorting to the arts of seduction, the young king placed himself at the head of the opposition party, causing that Alexandrian war (48-47) who made the future master of the world take serious risks. However, victory finally came to Caesar and Ptolemy XII found death in combat. Cleopatra, while remaining the true sovereign, she was then married to the younger brother Ptolemy XIII, whom she did not take long to make disappear. The queen, who ruled (v. CleopatraVII) under the protection of Caesar and the legions he left behind, perhaps formed ambitious dreams of universal domination, when the dictator had called her to his house in Rome. The events of the Ides of March 44 created new uncertainties and more serious dangers. However, Cleopatra’s arts were even more successful with the triumvir Antony. Cleopatra was able to preserve Egypt, where Caesarion, her son and Caesar’s, was recognized as king, and indeed to expand its possessions with the annexation of Phenicia, Syria, a part of Cilicia, and Nabatean Arabia. There is reason to believe that Cleopatra had succeeded in attracting in her dream of an oriental empire with a federative character with Alexandria as the capital, the companion of the “inimitable life”. Cleopatra associated with Antony, king and god, she was proclaimed queen of queens, and various kingdoms in conquered or to be conquered countries (such as Parthia) were distributed to their children; but Octavian decided to have his colleague accused before the Senate. Antonio’s dismissal was followed by the declaration of war, addressed to the queen of Egypt. The battle of Azio brought about the end of the Ptolemaic dynasty. Egypt became a Roman possession with its own particular organization (30 BC).

According to picktrue.com, this event closes the history of Egypt as a sovereign state for nineteen and a half centuries, albeit with a dynasty of foreign origin. Truly not only was the dynasty foreign, since the conquest brought with it the introduction into the Egyptian territory of a considerable percentage of new immigrant residents, who also enjoyed a situation of superiority and privilege in comparison with the indigenous mass which constituted the enormous majority, about six to seven million compared to a few hundred thousand. This resulted in a sui generis bodyvery complex, in which the leading Greek element tried to exercise an assimilating action not without, however, provoking a reaction on the part of the indigenous element subjected, a reaction that over time resolved the conflict to the detriment of Hellenism.

Ptolemy I continued the tradition of the Pharaohs, constituting an absolute monarchy. But the Ptolemies, given the hybrid character of the new state, could certainly not accept and apply the ancient customs, and the new dynasty was establishing itself through ingenious compromises between heterogeneous ideas and customs. The first Ptolemies, up to Epiphanes, did not undergo the mystical rites of coronation by the indigenous clergy, but left the Egyptian priesthood to consider the ceremony as having taken place and to attribute to them all the protocol titles it carried with it. Likewise, the other consequences of absolutism as conceived in the East could not be applied equally to the two principal elements of the new state. The divinity of the living ruler was immediately admitted by the indigenous people and the king did not oppose this conception, on the contrary he maintained close relations with the indigenous clergy through annual general synods, of which the decree of Canopus is testimony. The Greeks and Macedonians, however, accepted the principle of the divinity of the monarch only from Ptolemy II and at first sporadically and in the attenuated Greek forms. The Greek-Macedonians gradually came to the cult of the living sovereign, through the deification of Alexander the Great, founder of the city, and through that of the dead royal couples: from sons of gods the Ptolemies became gods themselves. And as such they were considered by all since Ptolemy III Evergete. 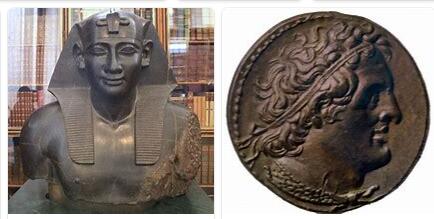