Eritrea developed a significant light industry under Italian colonial rule, but when the country was laid under Ethiopia after World War II, much of it was moved to Ethiopia, and it did not invest in modernization and development. Agriculture is traditionally the most important way of life, and is still the way of life for about three quarters of the working population. Eritrean agriculture has a strong element of nomadic husbandry, and agriculture suffers from lack of water supply and periods of drought. Due to the recent independence, available statistics are limited, but according to several economic and social indicators, Eritrea is one of the poorest countries in Africa. The economy has been significantly deregulated from the mid-1990s, and state-owned enterprises will be privatized, while property privatized under Ethiopian rule will be returned to the original owners. 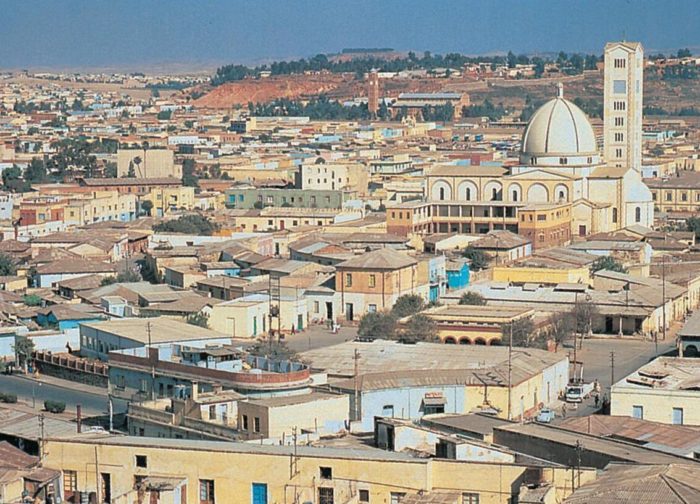 Asmara, the capital of Eritrea, is located in the highlands, 2350 meters above sea level. Central to the picture is the St. Mary’s Catholic Church with a bell tower.

Eritrea’s economy is still characterized by the protracted war of liberation, until 1991, as well as the war with Ethiopia in 1998-2000. The liberation war prevented normal social development in much of the country, and at the same time as central infrastructure was destroyed, little investment was made in the increasingly smaller areas that were under Ethiopian control. The Eritrean liberation movement, for its part, had limited resources to create business in the liberated areas, but initiated several measures to produce essential items for the civilian population, including medicines and school books, as well as equipment for the soldiers. Some infrastructure was also built in the liberated areas, including roads.

After the war, the large number of liberation soldiers was partly put into unpaid community service, partly taken into the new army and partly demobilized. Eritrea has maintained a significant military force, which was significantly reinforced, both with manpower and materiel, before and during the war with Ethiopia – at a great cost.

According to the authorities, economic growth was halved in 1998-1999 due to the war. In addition to the sheer cost, the wars have had several negative consequences for Eritrea’s economic and social development. In particular, the war with Ethiopia 1998–2000 has been costly. Among other things was central infrastructure such as the port of Massawa and railroad tracks, repaired after the liberation war, once again destroyed. The war led to a break in close economic relations between the two countries, including Ethiopia ceasing to use Eritrea as a transit route for its foreign trade, which caused Eritrea to lose large government revenue. The wars have also caused a large number of people to leave their homes and seek refuge in neighboring countries or elsewhere in Eritrea. This has led to costs for refugee programs, but also to reduced agricultural production.

Eritrea has a number of mineral deposits, but that is to a small extent extracted, and few revenues. Both for the post-war reconstruction and for general economic and social development, Eritrea is in great need of foreign aid. Because of its strong emphasis on independent, national control of development, Eritrean authorities have strictly regulated the activities of aid organizations, which has helped to reduce the scope. Norway has provided considerable development assistance to Eritrea from the outset of independence, and from 1996 it has been granted priority status for Norwegian aid. The cooperation has initially focused on strengthening the social and economic sectors, building public administration and measures for returning refugees.. After the war with Ethiopia, increased emphasis was placed on peace and reconciliation, including the demobilization of soldiers.

Potential for economic growth lies in the opportunities for offshore coastal petroleum, fishing and tourism. The opportunities for tourism are particularly linked to potential ecotourism on the Dahklak Islands. Eritrea is also looking at opportunities to take on a central position as a regional trading center. The country introduced its own currency, nakfa, in 1997, to replace the Ethiopian birr.

Agriculture is Eritrea’s most important trade route, employing around 77 per cent of the working population. The sector consists partly of agriculture, primarily in the somewhat more precipitous highlands, and nomadic animal husbandry, dominated by sheep, goats, camels and cattle. There is considerable production of the grains of millet, sorghum, teff, wheat and barley, as well as coffee, legumes, papaya, citrus fruits, bananas, mangoes, beans, potatoes and vegetables.

Agriculture is hampered by sparse and irregular rainfall, and by deforestation and erosion. Particularly the liberation war contributed to ecological damage, and projects have been initiated to build water reservoirs and ponds, as well as terracing of hillsides and forestry to limit erosion. Repeated drought disasters, both in the 1980s and 1990s, severely affected agricultural production. The war in 1998–2000 caused about 1 million people to flee, many from good agricultural areas, where planting could not be carried out, and where destruction and mining made production difficult. Significant parts of the Eritrean population depend on food aid at times.

The fisheries are underdeveloped and represent considerable potential, with an estimated annual catch of approximately 70,000 tonnes. The fishing is carried out substantially by foreign trawlers, especially from Saudi Arabia, the United Kingdom, Greece, the Netherlands and Israel. The catch includes sardines, tuna, shark and mackerel, as well as shellfish. Tuna, shrimp and lobster are exported.

Eritrea has reserves of gold, copper, iron ore, zinc, magnesium and marble, and the deposits are believed to have considerable economic potential. Extraction is still very limited and consists essentially of gold. Of most economic importance are possible deposits of oil and gas under the Red Sea. Exploration started in the 1960s, and was stepped up in the 1990s, with sample drilling – with no worthwhile discoveries. Uncertainty is also linked to the border between Eritrea and Yemen, around the disputed Hanish islands. A limiting factor in Eritrea’s economic development is the lack of power resources, as the country has little capacity for electricity generation and is dependent on oil imports.

Eritrea’s industry was built up under Italian rule, and was for a long time a relatively broad-based light industry, which was reduced under Ethiopian rule. The industry is concentrated around the capital Asmara, and consists essentially of the food, textile and leather goods industries.

Eritrea’s economy was fully integrated into Ethiopia until the early 1990s, and continued into Ethiopia’s most important trading partner until the 1990s, until relations were broken as a result of the 1998 war. Eritrea relies heavily on both energy and food imports. The country also exports food, including live animals. Exports are substantial to Sudan, with imports not least coming from Italy and the United Arab Emirates.

Eritrea has two of the region’s best ports in Massawa and Assab, which until the war in 1998 were widely used by Ethiopia, connected to the Ethiopian capital of Addis Ababa by roads. The road network extends mainly from the capital Asmara to Massawa and to Sudan in the west and Ethiopia in the south. The port of Massawa was destroyed by wars during the liberation war, and the construction of a new port was begun in 1996 – to be destroyed again in the war with Ethiopia in 1998-2000. From Massawa there is a road link along the coast to Djibouti.

In large parts of the country the road network is poorly developed and of a low standard. Eritrea has only a minor rail route from Massawa via Asmara to Bisha, which was upgraded in the second half of the 1990s. New international airport is built outside Asmara. 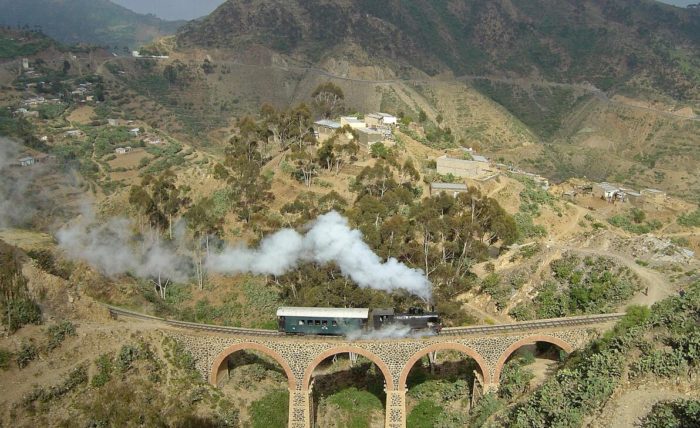