Egypt’s main trade route is traditionally agricultural, and until the first part of the 1970s the country was self-sufficient in food, while the sector produced goods for export. Egyptian agriculture is entirely dependent on water from the Nile. The water from here, combined with widespread use of irrigation and fertilization, makes the Nile Valley one of the world’s most fertile areas. From 1969, the Nile’s annual flood is captured by the Aswan Dam, and flood water is used for year-round irrigation. This has made it possible to increase the agricultural area while increasing the number of crops from one to two a year to three to four in some places. As the water flow is regulated, the fields are no longer fertilized by the fertile river sludge, which has increased the need for mineral fertilizers. There are also problems with neglect and increased salt content in the fields. Agriculture is dominated by small farms, which are labor-intensive and old-fashioned. 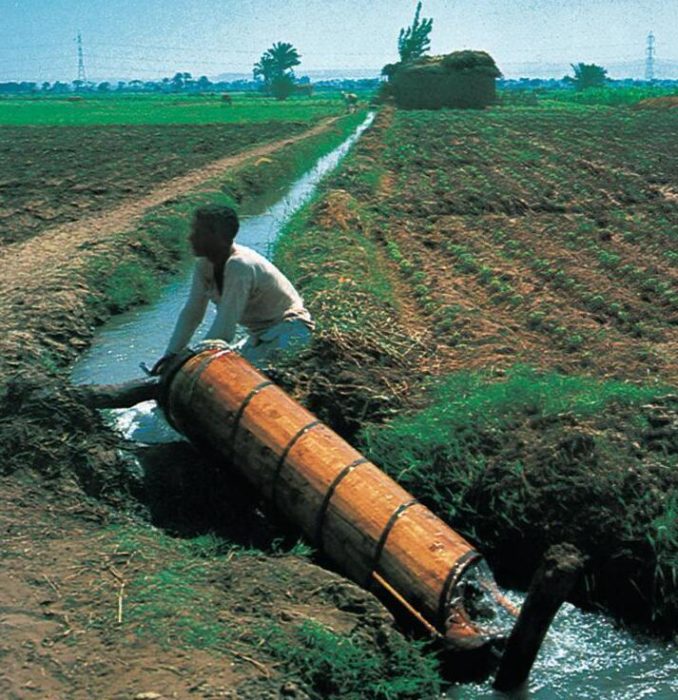 Ever since ancient times, agriculture in Egypt has depended on an ingenious irrigation system that carries the Nile’s water out over the earth. Here, the water is raised from one channel to another using the principle of the Arkhimedes’ screw.

Around 96 percent of Egypt’s land area is desert, and the remaining arable land has been reduced due to urban and industrial development. The authorities have invested heavily in a large-scale new cultivation program, with extensive irrigation facilities that have enabled the cultivation of new areas. The New Valley project, which started in the Western Desert in 1997, with an associated city (New Toshka town), is planned to make about 200,000 acres of desert productive by supplying water through a channel from Lake Nasser. Although only about three percent of the land area is cultivated, this is particularly fertile soil, especially in the Nile Valley, with several crops – and its own winter and summer crops.

Agriculture is of great importance to the Egyptian economy, accounting for nearly 15 per cent of GNI, but employs over a quarter of the working population. The sector employs almost 45 per cent of all working women. Agriculture provides significant currency income from exports. Egyptian agriculture is essentially geared towards production for sale, not so much self-storage in terms of food.

From the mid-1970s, food production has not kept pace with population growth. Therefore, there has been a growing need for imports, and around half of the country’s food needs, especially wheat, must be imported. Egypt has a high level of wheat consumption per capita, and is therefore vulnerable to the type of strong food price increases experienced by the world in 2007-2008. Cereals are, together with vegetables, the most important winter crop, while the summer crops mainly consist of cotton, rice, sorghum and maize. Egypt is self-supplied with fruit, which is also exported. The most important export growth is high-quality long-fiber cotton, which is mainly grown in the delta area. Egypt is the largest exporter of the best quality, but about 80 percent of Egypt’s cotton production is used by the country’s own textile industry. Increased rice production has made this a valuable export commodity, while cultivation of sugar cane is encouraged to reduce the need for sugar imports. Animal husbandry plays a relatively modest role in Egyptian agriculture, due to a lack of pasture land and land for fodder crops. However, increased production of meat and dairy products is aimed, among other things, at reducing the need for imports. Sheep are kept sheep, goats, cattle and poultry; Buffaloes are used as migratory animals in many areas. 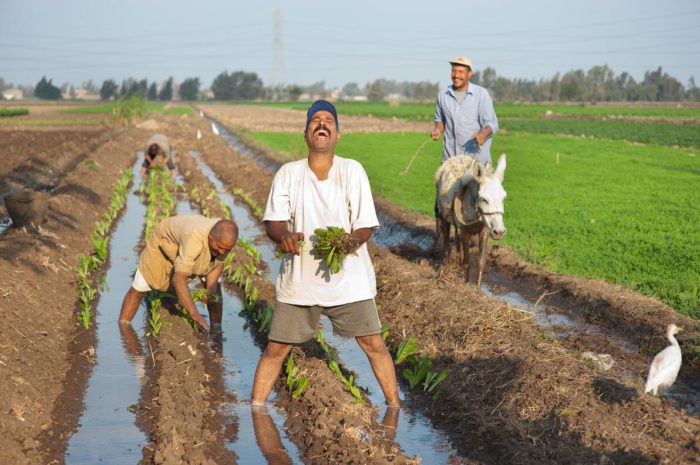 Agriculture is very important to Egypt’s economy and employs many people. However, much of the sector is not mechanized, but is operated in a traditional way. Irrigation from the Nile is central to making things grow in the desert. Here some plants plant, while one digs irrigation channels with the help of a donkey.

Egypt has deposits of a number of minerals, but only a few have been detected on a commercial scale and are recovered. The exception is primarily oil and gas, which are extracted both on land and offshore. Iron ore and phosphate are further extracted in several places; further gold, manganese and chromium, and significant deposits of coal and uranium have been identified.

The petroleum sector accounts for about 16 per cent of Egypt’s GNI. Oil production started as early as 1908, but only became of significant economic importance after new fields were opened in the Suez Bay, Sinai and near al-Alamain from the 1960s. Scale production took until the 1970s, until Egypt in the 1980s became an oil producer of international importance.

Exploration for new deposits of oil and gas was intensified in the 1990s, and it has continued, with positive results. Egypt’s proven reserves (2017) are 3.3 billion barrels of oil and 62.8 trillion cubic feet of natural gas. The Egyptian Zohr field is considered the largest gas discovery ever in the Mediterranean, and consists of about 30 trillion cubic feet alone. Production here started in 2017.

Egypt has the largest refining capacity in Africa, at 840,000 barrels per day. However, the capacity of the seven refineries is not fully utilized. The largest refinery is the Nasr refinery at Suez. There are also three liquefied natural gas ( LNG ) plants for export; several are designed.

Egypt also has significant revenues from energy transport; partly from shipping traffic through the Suez Canal and partly from the Gulf: Suez-Mediterranean Pipeline (Sumed). Several gas pipelines supply Egyptian gas to the Middle East and Europe.

Egypt has extensive power generation, and just over ten percent of its energy needs are covered by hydropower. This was long manufactured primarily from the Aswan Dam, which opened in 1971. Egypt reached an electricity production of up to 20 GWh in 2017. Around 90 per cent of total consumption is produced at the nation’s heat power plants, using oil gas. Egypt is an exporter of electrical energy, with plans for increased production for export to several countries in the Middle East.

Egypt aims to increase the share of energy consumption from renewable sources to 42 percent of total consumption in 2025. The country is investing heavily in solar energy, where one large project, Benban, alone is expected to generate up to 1.8 gigawatts. A wind farm at Zafarana has been operational since 2004, with a planned capacity of 160 MW.