Egypt is the most populous state in the Middle East and North Africa, and has the third largest economy in Africa and the largest in North Africa. However, with relatively limited natural resources, a high population and high unemployment, Egypt has a lower average income than other countries in the region.

Therefore, despite a complex economic sector, Egypt also has a significant poverty problem. The proportion of Egyptians living below the poverty line grew in the early 2000s, although significant economic growth was recorded. It is estimated that between one third and one fourth of the population lives below the official poverty line (2017).

Population growth combined with limited cultivable areas has contributed to a high degree of urbanization, which means that many people move from the countryside to the cities. Lack of agricultural land and jobs has led to great labor migration: many Egyptians seek work abroad, especially in the Gulf area and Libya. Both places have employment opportunities varying with political as well as economic developments. Egypt’s revenues from the economically important tourism industry are also affected by political conditions. The number of visitors, and thus employment and income, varies greatly with the security situation both in the region and in Egypt. 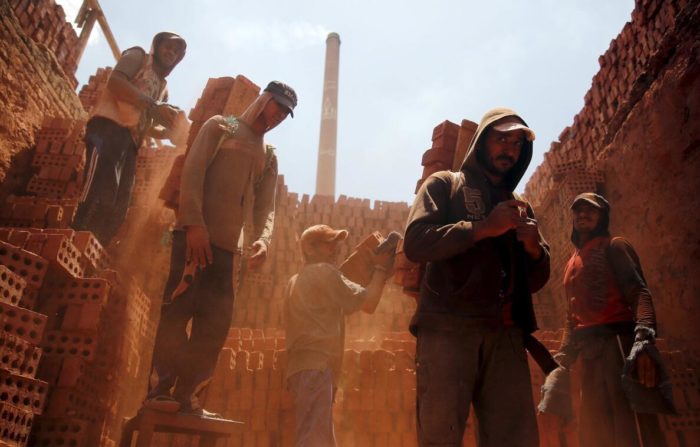 Egypt has an extensive production of bricks, but the workers in this industry work under terrible conditions, with long days, low wages and uncertain prospects.

Egypt’s economy is particularly dominated by agricultural production and petroleum extraction. Cultivable land is limited and is mainly concentrated along the Nile Delta. Large population growth has increased the pressure on available land as well as the demand for food – which must largely be imported. At the same time, the country is a leading exporter of cotton. Egypt has extensive mineral deposits ; above all oil and gas, which has significantly affected the business development in the country. It is an extensive power generation to meet growing consumption and support economic growth. The construction of the Aswan Dam in the 1960s laid the foundation for hydropower production, and at the same time regulated the water supply to agriculture along the Nile. The water from the Nile has been crucial to Egypt since ancient times, and – with the Aswan Dam – has been a significant factor in the modernization of Egyptian social life and economy. Therefore, there is unrest in Egypt over the consequences of Ethiopia regulating one of the sources of the Nile by curbing the Blue Nile through the Grand Ethiopian Renaissance Dam.

Egypt’s economic policy has changed direction several times since the revolution in 1952. After first following a socialist- oriented planning economy, with a dominant state role in business, the policy was gradually changed from the 1970s. Market orientation increased in the 1980s, to become even more pronounced in the 1990s, with continued liberalization after the turn of the millennium: first with somewhat greater opportunities for private actors, then with deregulation, and extensive privatization of state property. 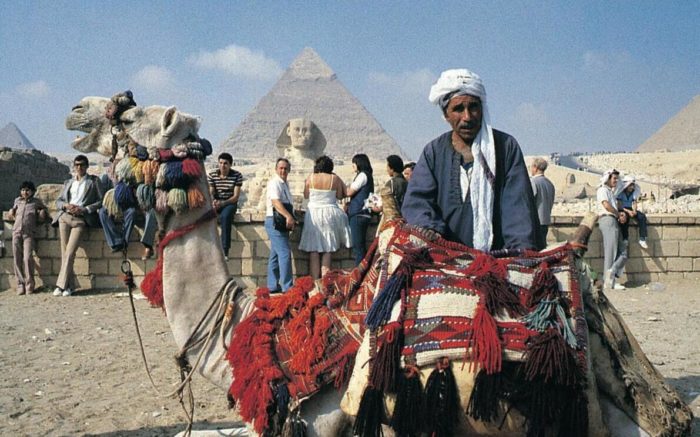 The Pyramids at Giza are among Egypt’s most visited places. Here it is teeming with guides, camel landlords and souvenir sellers. The country’s other past memories, cruises on the Nile and swimming, diving in the Red Sea etc. attract a large number of tourists annually.

The modernization of Egypt’s economy under the British rule of the 19th century was geared to the needs of British industry. In particular, the development of agriculture turned to growing cotton for export to the United Kingdom. National industrial travel in Egypt was not prioritized until the 1930s. Economic policy led to a gradual deterioration of people’s living conditions, which in turn created dissatisfaction with Egyptian leadership, with King Farouk.

After the revolution in 1952, and under President Gamal Abdel Nasser, economic development was given the highest priority, with great emphasis on industrial establishment, including through the construction of power plants. Socialist theory was the basis for economic development, but in practice a socialist policy, with a planned economy, was not implemented until the 1960s. But as early as 1956, Egypt nationalized the Suez Canal, as well as French and British property, after these two, and Israel, attacked Egypt after the nationalization, in the so-called Suez crisis. From 1961 a number of enterprises were nationalized.

With Anwar al-Sadat as president in the 1970s, the state dominance of the economy, which was introduced under Nasser in the 1950s and especially the 60s, was reduced. Increased room for private participation in several sectors was gradually provided. At the same time, foreign investment was opened. This twist was rooted in the so-called “open-door policy” (in Arabic infitah ) in the economic sector, which Sadat introduced during his presidency, and which his successor Hosni Mubarak carried on when he took over in 1981.

The economic policy under Sadat, with deregulation and the gradual introduction of market policy, led to increased social divisions. These continued to grow under Mubarak, boosted by high population growth, high unemployment and pressure on available agricultural land. The social tensions led to riots on several occasions, including when food subsidies were removed in 1977.

Egypt was harmed by the Arab boycott after it signed the peace treaty with Israel in 1979, but in return it became the second largest recipient of development aid from the United States. However, this assistance was gradually reduced throughout the 1990s and beyond. Economic reforms in the early 2000s, including increased foreign investment facilitation, have helped to meet the economic and social challenges Egypt faces. With cheap labor and energy at a geographical and economic crossroads between Europe, Africa and the Middle East, Egypt has in many ways an advantageous position, which the country seeks to exploit in order to attract foreign investment. 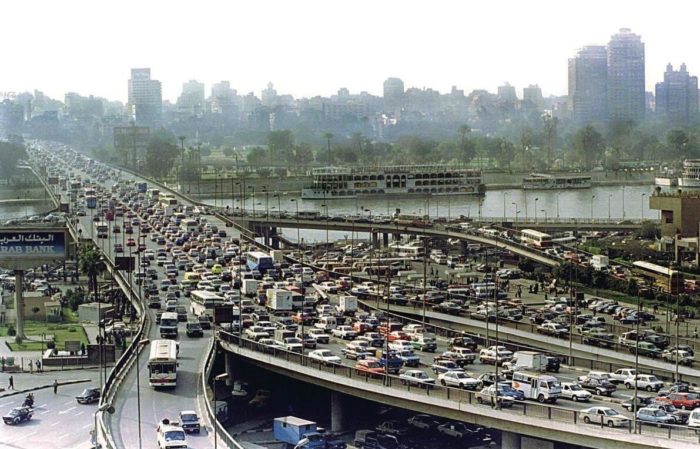 Egypt has a well-developed road and rail network, but car traffic in Cairo is about to blow up the city’s street network. Here, the October 6 bridge in Cairo in rush hour traffic.