Passport: is generally required for trips to Djibouti, it must be valid for at least 6 months. At least one page must still be free for visas.

Visa on entry: It is recommended to apply for a visa before departure, as issuing a visa at the airport can be very lengthy (the passport can be withheld for up to two days). Visas can be applied for at any Djiboutian embassy, ​​but also at the French consulate general in Frankfurt / Main (here, however, only single-entry visas and a maximum stay of 10 days).

Visas can only be issued directly at Djibouti-Ambouli Airport to citizens of countries that do not have a diplomatic representation of Djibouti or France in their country of residence. A business or tourist visa for a stay of up to 10 days costs FD 3,000 at Djibouti city airport, a visa for a maximum of one month costs FD 5,000.

Transit: Transit travelers who fly on to the next connection and do not leave the transit area do not need a transit visa. This does not apply to Israelis who are denied entry and transit.

Documents: tourist visa: passport that is still valid for at least 6 months – an original, completed application form (no copy, no fax, completed in French) – 1 original passport photo (no scan, color, no larger than 3 x 4 cm) – Postal order for fees and postage (no check) – proof of return flight ticket – hotel reservation or proof of accommodation – proof of an existing employment relationship in Germany – proof of travel health insurance with a coverage of at least € 30,000

Business Visa: In addition, a letter from the applicant’s German company with the following information: reason for the trip, address of the contact company in Djibouti and confirmation that travel and subsistence expenses are paid in full by the company.

Vaccinations: Information on the international vaccination certificates required for entry can be found in the chapter Djibouti – Health.

Germany: The Djibouti authorities do not recognize the German children’s ID card. Children need their own passport (children’s passport or electronic passport) to enter Djibouti.

Austria: own passport for children.

Currency exchange: in the large hotels and banks as well as authorized exchange offices in Djibouti City, it is recommended that you take enough cash with you in US dollars or euros. Most of the banks are on Place Lagarde. There are hardly any exchange options outside the capital

Credit Cards: Only accepted by airlines and some major hotels. In banks, however, you can get cash payments on credit cards

Traveler’s checks: are not widespread even in the capital and are hardly accepted

ATMs: very few in Djibouti City, but these are not reliable

The medical care is inadequate, medicines, bandages, medical instruments and tools must be purchased prior to treatment in pharmacies. It is important to ensure that you do not buy drugs that have already expired and that they are products from reliable production. Hospitals never offer western standards. More serious illnesses should therefore be treated in other countries.

Djibouti is at risk of malaria year-round and nationwide. Dengue fever is observed in the wet season and after rainfall.

Before starting the trip, travelers should get advice from an experienced tropical doctor and get enough vaccination. When entering from endemic areas, the yellow fever vaccination is mandatory.

Airplane: an airplane flies twice a week between the capital and Obock.

Ship: There are speed boats and local sailing ships (dhows) from Djibouti town to Obock and Tadjoura.

Rail: there are several stops in the country on the international rail route between Djibouti and Ethiopia, including in Ali Sabieh.

Djibouti city is connected by bus to all major places in the country, but waiting times have to be planned because fixed timetables do not exist and are driven as needed. A new asphalt road connects the capital with Tadjoura. The other connections in the country often consist of bad slopes, off-road vehicles are recommended. Carry enough water and fuel with you. You can get a rental car at the airport and in the capital. Documents: the international driver’s license is recommended, but is not mandatory.

In Djibouti city, minibuses run at fixed fares. They operate fixed routes on which stops are made as required. Taxis can be used at the airport and in larger towns such as Ali-Sabieh or Dorale.

Tourist highlights in the country

The country’s capital, Djibouti City, surprises with an international flair, where Afar nomads can be seen alongside French foreign legionnaires and businessmen. This coexistence and coexistence of different cultures can be clearly seen in the large Marché Central. 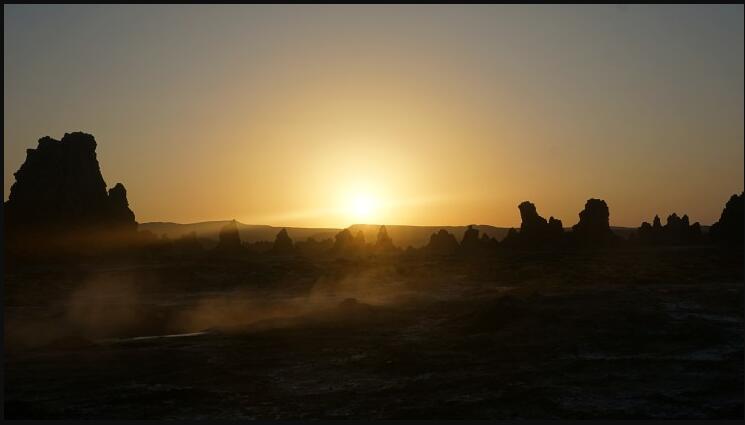 Djibouti city has retained a colonial character, in the city center there are still French buildings next to Arabic ones. Perhaps the city’s most impressive building is the Hamoudi Mosque.

Not far from Djibouti City are the Moucha and Maskali Islands, where you can retreat from the chaos of the city on almost deserted beaches.

Whale sharks live in the Bay of Ghoubbet from October to January, during this time it is one of the few places in the world where you can watch these giants relatively close to the coast while diving or snorkeling.

The biggest attraction of Djibouti is surely the surreal desert landscapes. To the west of the capital is the Lac Assal framed by volcanoes. At 150 meters below sea level, this is one of the lowest points on earth and the lowest point in Africa. the shores of the lake are covered with salt, which is mined by the Afar nomads and transported to Ethiopia by camel.

The Lac Abbé is another impressive place in Djibouti. The lake is located in an area that is covered with up to 50 meters high, smoking and steaming elevations. In certain places it looks like a lunar landscape. In the evening there are hundreds of flamingos at the lake.