Head of government: In 2018 this office was abolished

Chad the cradle of humanity? Since the skull of Toumai (“Hope for Life, Courage to Live”), an approx. 7 million year old humanoid, was found in the Djourab, a heated expert discussion has been sparked about it. During the Neolithic period, today’s Sahel zone was very fertile and rainy, which is evident from the spectacular rock paintings in the Tibesti and Ennedi mountains in northern Chad. Several remains of clay pots and stone tools, which were found in the area around Lake Chad, among others, testify to the early settlement of today’s Chad. The finds from the legendary Sao people are particularly interesting, which went down in history as one of the oldest iron-bearing cultures in West Africa and which both produced unique burial vessels and was pioneering in the field of urban planning and art.

In pre-colonial times, the area around Lake Chad became the hub of the Trans-Saharan trade (the main trade goods were salt, gold, ivory, spices and slaves). The most important centralized empires were Kanem-Bornou, which from the 8th / 9th. Century should strengthen to the dominant power in the Chad region, and Baguirmi and Quaddai, who took Kanem supremacy from around the 16th century. In the second half of the 19th century, the slave trader Rabah al-Zubair from what is now Sudan terrified the region and subjugated large parts of the area around Lake Chad.

Only the French under General Lamy, who invaded today’s areas of Chad from the south at the end of the 19th century, succeeded in putting a stop to him in 1900, in the decisive battle at Kousseri.

The colonial power of France could only be useful in some parts of the south, because fertile Chad (especially called “Le Tchad utile” because of the cotton cultivation) would gain a foothold for 60 years, while the northern part was administered purely militarily. For the French, the country was primarily of strategic importance, so that the infrastructure was only built rudimentary during the years of colonization and was geared towards economic and political needs. To this end, they also introduced a modest education system in the south.

1884 In Berlin (Congo Conference) Africa is divided on paper among the European colonial powers. The areas of today’s Chad are assigned to France, which at the end of the century begins to occupy the areas coming from the south.

1900 The French-occupied territories are declared a protectorate of France, three years later a French colony.

1908 The colony of Chad becomes part of the administrative area of French Equatorial Africa.

1920 The area is declared an independent colony.

1934 The Aouzou conflict begins because the border to the north (Italian colony Libya) is not ratified by Italy.

1946 Chad becomes part of the French Union (Communauté Francaise) as an overseas territory. The first parties are formed in the country and Gabriel Lisette, together with other intellectuals from the south, founds the independence movement ‘ Parti Progressiste Tchadien ‘ (PPT).

1958 With the approval of the Territorial Assembly, Chad becomes an autonomous republic within the French Community.

1960 On August 11th, the Republic of Chad is granted independence from France. Modern history was decisively shaped by the politics of the first President of Chad Ngarta Tombalbaye and his successors.

A rough overview of general key data on the history of Chad from 1900 to 2011 is provided by the Africa network and more recent data on a chronology of Jeune Afrique.

According to aristmarketing, the post-colonial history of Chad was marked by civil wars and a repressive state power. After the hopeful early years, centralism and repression led to rebellions in various parts of the country early on. The national unity widely preached by the presidential regime did not do justice to the country’s cultural and ethnic diversity. After its independence, Chad remained a torn country where human rights violations and refugee movements were the order of the day. Especially under Hissène Habré, who was President of Chad from 1982-1990, the political killings and violence campaigns increased. This led to an international arrest warrant in 2005 and the opening of an official case against the exdictator. Habré was convicted only in 2016. (Further information can be found under the heading ‘Human Rights’.)

Idriss Déby, the current president, appeared on the political stage as a bearer of hope and innovator in the first years after he came to power in 1990. He promised the Chadian people free elections, a new constitution and the convening of a sovereign national conference. This was intended to initiate the processing of the conflicts of the last decades and the reconciliation process. But despite the initially positive developments, the first free elections were not due to take place until 1996, the results of which remained controversial. The fragile state apparatus continued to be destabilized under Déby as a result of rebellions and violent conflicts, especially in the north and east of the country. 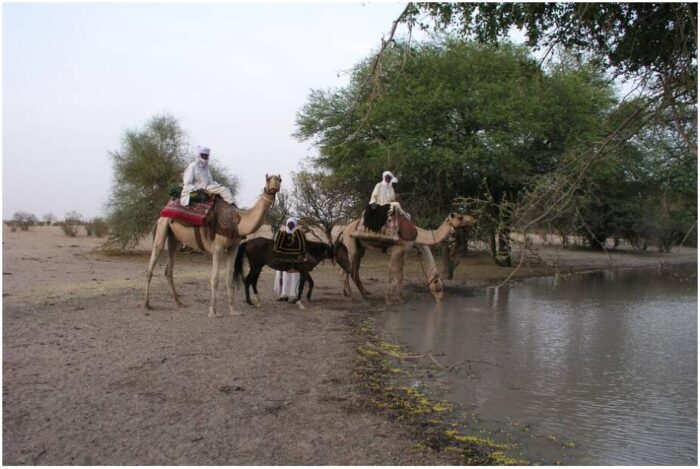