The supply conditions and possibilities depend very much on the location in the country. In N’Djaména you can get supplies according to European (mainly French) standards in the small French, Lebanese and Chinese supermarkets on Rue Charles de Gaulle, and there are also bakeries and butchers. There are also good offers in the other larger cities such as Sarh and Moundou. However, the food imported from Europe is two to three times as expensive as here.

The goods on the markets are cheaper, where you can find a more or less wide range of fruit and vegetables depending on the season. Availability in rural areas is very limited, especially before the rainy season.

Meat is available almost everywhere at very low prices (by European standards) and good quality fish are sold near water. The Große Capitaine, a species of Nile perch that is also offered in many restaurants, is particularly popular.

The changes and modernization efforts in the capital in recent years are described in the article N’Djaména, une ville qui se modernize dans la douleur.

According to historyaah, the price level in Chad in general is very high. In terms of cost of living in 2016, N’Djaména was ranked 9th after Geneva in Switzerland of the most expensive capitals for expats. In 2019, the Chadian capital was 11th most expensive city in this ranking. It was the most expensive in 2019 again in Hong Kong, ahead of Tokyo.

Most sending organizations provide adequate accommodation for those leaving; but these can also be found through brokers. In the cities, these are larger concrete houses, which are supposed to protect against intruders and unpleasant looks with a wall about 1.50 – 2 m high. Furniture can be made locally anywhere, or it can be taken over from other travelers. As in this country, the best way to find good craftsmen is through word of mouth. As in Germany, the mains voltage is 220 volts / 50 Hertz, but frequent and long-term power outages are to be expected and the energy supply is still very patchy. The water supply is often qualitatively and quantitatively problematic in both rural and urban areas. Water should therefore always be filtered or boiled!

Hotels and guest houses in different price categories can be found in N’Djaména and the larger cities.

International schools in N’Djaména are the L ‘Ecole Primaire and the Lycée Francais Montaigne, an English and an American school.

The national holiday of Chad’s independence is August 11th. There are also a number of Muslim holidays such as the end of Ramadan or the Festival of Sacrifice and Christian holidays, on which most shops are closed.

In the Chadian cuisine, La Boule is the central main and national dish. It usually consists of a cooked millet dumpling (also sorghum or rice) and the accompanying sauce. This is refined with meat or fish and gombo (okra pods), variable (leaf) vegetables, onions, tomatoes and various spices. La boule is eaten in the morning, at noon and in the evening in many households.

La bouillie, a type of rice pudding with sour milk, is also widespread. The preferred drink is black tea, but karkanji, a sweet and sour tea made from hibiscus flowers, is also very popular.

There are now a number of banks in Chad (especially in N’Djaména and Abéché), of which the Financial Bank and ECOBANK are the most recommendable. International money transfer is possible in the capital without any problems, but credit cards are only accepted in a few larger shops. Bringing euros or US dollars with you is recommended, as these are the easiest to exchange. The re-exchange outside the CFA franc zone is only possible at very unfavorable rates.

For anyone who does not live in N’Djaména, it is advisable to open an account there. It is easier to transfer money at the Financial Bank by check, but special international transfers are also possible directly to the ECOBANK account, e.g. in Pala (not cheap, but higher fees are also due when cashing a check). This remains cheaper than, for example, Western Union and the credit is also credited to the account within 3-5 days.

The health care has, can form only rudimentary in Chad due to the unstable political situation in recent decades, not only in the eastern areas. Although the situation has improved in recent years thanks to support from the European Development Fund, among other things, the rural areas are still inadequately supplied and the general health of the population is very poor. In the Kanem region in western Chad, in particular, the supply is worryingly poor.

Above all, maternal and child mortality is very high in comparison with Africa. Because many girls are married at the age of 12 or 13, pregnancies occur early, which at this age often lead to birth injuries and fistulas. These in turn are often associated with incontinence and the resulting social exclusion.

The individual prefectures in Chad are divided into Préfectures Socio-Sanitaires and have hospitals and medical wards, which, however, are often only equipped with the bare essentials and have serious hygienic deficiencies. Only 30% of the population has access to primary health facilities, as the data from WHO document. 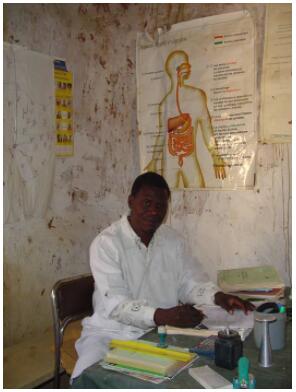 Due to the pandemic, the national borders are closed, but commercial air traffic has been back in operation since the beginning of August. The socio-economic impact is serious. The Federal Foreign Office advises against non-urgent trips to the country and provides information on its website about current developments and regulations. At the end of September 2020, there were almost 1200 confirmed cases of COVID-19 in 17 provinces, 82 of them resulting in death. The population is to be sensitized with information campaigns. Other epidemics, such as the increased incidence of chikungunya and rubella, worsen the health situation in the country.

Recurring cholera outbreaks result in numerous deaths in Chad. The border regions with Nigeria and Cameroon are often affected here. The worst outbreak in three decades occurred in 2011. In 2017, an outbreak occurred in the Sila region in the south-east of the country on the border with Sudan. In total, over 700 cases of cholera were known by the end of 2017. In 2018 there were more than 500 deaths around the Lake Chad region.

But more than other diseases, malaria is particularly fatal in children. The Sahel countries are trying new cases of malaria in the regions through preventive and protective measures drastically decrease.

The Chad is not among the high-prevalence countries for HIV, but the virus spread particularly in the South (petroleum and refugee region) and the region around Lake Chad quickly. The infection rate fell slightly between 2005 and 2015 and statistics since 2013 speak of around 2.5 (previously around 3.3%) of the population that is said to be affected (in the oil region even 10%). Cultural and religious taboos as well as a great lack of knowledge about transmission possibilities and the use of condoms lead to great difficulties in the implementation of awareness-raising campaigns and programs.

According to ESTATELEARNING, Republic of Angola is a country of the central African gaining independence from Portugal in 1975. It has great natural resources that it has not been able to fully exploit in its development due to the long civil war in which it was immersed from shortly before independence until the first decade of the 21st century. It […]