Most of Botswana’s population belongs to the Tswana people. The economy is based on livestock management and agriculture. Most tswana live in large villages with 15,000-20,000 residents. Each household occupies a plot of several fenced farms for livestock and vegetable farms; In particular, the inner yard plays an important role and serves as a living room for the whole family. Between the houses and the courtyard walls, a space is created in the open where you get together to cook and eat food and receive visits, and where children play. There is also a fireplace for the cold season. Sometimes there is a special house for cooking during the rainy season. Originally, most houses were round and had only one room. Recently, rectangular houses have also been built. In both cases, sun-dried clay tile, adobe, is used as wall material and straw for the roof. House walls and courtyard walls are plastered with several layers of clay and decorated with geometric patterns in different colors. Some types of clay are also used as color material in the “natural” color scale black, brown, reddish brown, beige and white. 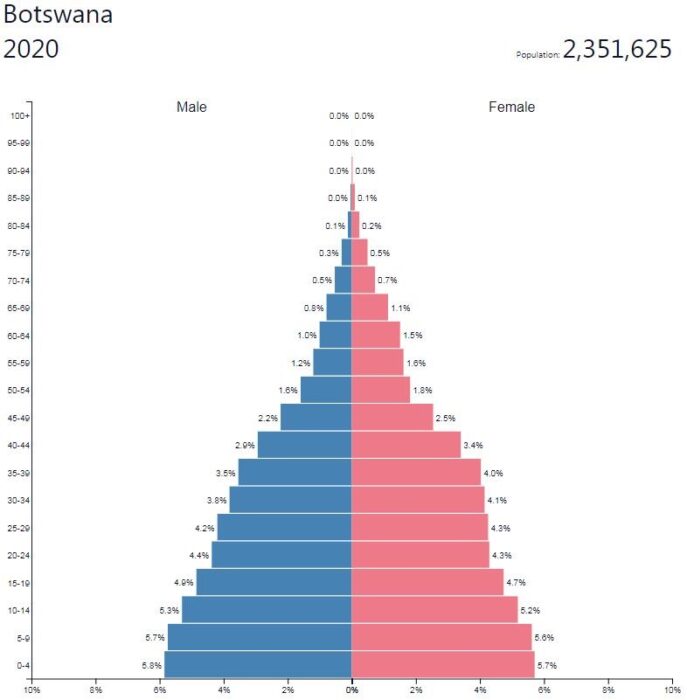 The capital Gaborone was founded on the Declaration of Independence in 1966. The city’s circular city plan was built following the British new town concept. A modern car-free business center, The Mall, extends between the National Assembly and City Hall.

A prominent feature of the Tswana people’s music life is the large flute ensembles of up to thirteen flutes (dithlaka). Each instrument alternately contributes just one ton to the whole (hocketus). The instruments are played by men, who simultaneously dance. The women contribute with clapping, foot stomp and play on tapered wooden drums with a leather (meropa). Other musical instruments that come into use in ritual contexts are dance rattles (mathlo) and trumpets of animal horns (diburuburu). More intended for individual musicianship is the tump piano (mbira) introduced by the north and various forms of music arc (sekokwane and segankuru), favored by shepherds and bystanders. The music practiced by the various singing groups (bushmen) of the Kalahariom Council is characterized by polyphonic song built on the hocketus. The dominant instrument is the musical arch.

At the time of independence, big band jazz was popular. Many jazz musicians applied to the army where there were prerequisites for performing music, including Socca Moruakgomo, flute horn, Sebene Morolong, guitar, and singers Michael “Malombo” Mmereki (1951–2011) and Tsilo Baitsile. Musicians who left the oppression in apartheid South Africa also played a major role in Botswana’s music life.

During the 1980’s, Alfredo Moss (really Alfred Mosimanegape) achieved success with his version of Congolese rum, while others drew inspiration from, among other things. South African kwaito. Still others have managed and developed domestic traditional music, e.g. the group Ditholwana and Duncan Senyatso (1959–2006).

One of the country’s most famous musicians is guitarist John “Blackie” Selolwane (born 1946), who was active even before independence and who later played with, among others. Paul Simon. Mention can also be made of singer Shanti Lo (actually Tumediso Loeto, born 1982), who appeared in a.k.a. Sweden.