From medieval to modern times

The art of this period is first and foremost decorative Islamic art, which is largely related to architecture. Ornaments and calligraphy are common expressions of art, figurations are rare. In the period 1000–1500 a lot of fine pottery is made, first after Iraqi models, but during the Mamluks approx. 1300–1500, a peculiar Egyptian pottery with thick lead glaze is created with heraldic decor in brown, yellow and green. 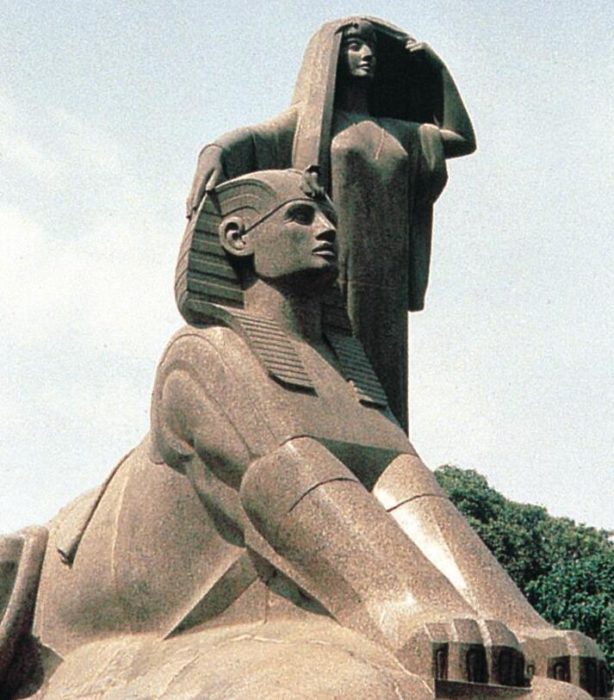 From around the 6th century, Egypt has an Arabian architecture. The main tasks for the architecture were the construction of mosques, defenses, baths, wells, palaces and homes. Up to about 1500, stone architecture is being developed in Cairo which is one of the highlights of Islamic art. They are first influenced by the influence of Damascus and Baghdad. Ibn Tulun’s mosque from the last part of the 800s is completely Iraqi, the walls of the 1000s are a heritage of Byzantium. During the Fatimids, a distinctive Egyptian style develops, which is continued with new features under the Mamluks. The stone architecture used elements of stucco, marble, timber and glass, rarely tiled. The domes had enormous dimensions, such as Sultan Hasan’s mosque (from the mid-1300s). Even today, the religious Egyptian architecture is based on traditional medieval elements, but with modern materials such as steel and concrete.

Modern Egyptian visual art evolved into the tension between two main streams, one national and one western. Within the national, there are several important undercurrents such as Arabism, Islamism, historicism, Egyptian and political art. The Egyptian visual arts relate fairly freely to the traditional isms and add a clear Egyptian content to them.

In 1908, the École Egyptienne des Beaux-Arts was founded on a Western pattern. Teaching powers were largely sourced from France and Italy. The time between the independence of 1922 and the 1952 revolution was an important period of break in Egyptian social life and cultural life. There was an active art life, with great contact between different art directions, and many foreign artists settled for shorter or longer periods in Egypt.

Egyptian artists naturally sought their cultural roots back. It led to a mix of Egyptian Impressionism, Social Realism, Surrealism and National Romanticism.

In the establishment phase, the national aspect is the clearest trend. This is reflected in both the design and the design choices. Both the sculptor Mahmoud Moukhtar and the painter Mohammed Nagi draw inspiration from ancient Egyptian art. At the same time, they stand in a European tradition, and freely use elements from both these sources in their work. The figurative is clearly dominant during this period. Gradually, the national romantic or folklore plays an increasingly important role. Artists draw inspiration from both farmers in the countryside, in the rich folk storytelling tradition and in popular religiosity. Islam is not a direct theme during this period, nor is calligraphic art. During this period, the “pure Egyptian”, which can unite all groups in society, is dominant.

There were also other trends, namely the more internationally oriented, intellectual, linked to the left and the surrealists. Before 1952, all intellectuals in Egypt had received Western education. It was natural that many of them, including Ramsee’s Younan, were more oriented towards Europe than to the growing national currents. The various groups led to a vibrant diversity, but also strong breaks in Egyptian art and cultural life in the pre-1952 period.

In the post-war period, and especially in the post-1952 revolution, political art became highly prominent, including various pan-Arab ideas. The West’s role vis-à-vis the Middle East following the founding of Israel led many intellectuals to eventually move away from the West and rather work with various means of Arab unity. Al Gazzar and Injy Efflatoun have partly worked in this pan-Arab political direction. Within the political arts, there is also a clear national foundation.

The clear national anchorage we saw in the previous generation also continues into contemporary art. The tendencies of seeking inspiration in ancient Egyptian art or in folklore continue. In addition to the national, the regional, represented by Islamic aspects, also plays a more important role. It has both a national and an international pan-Arab aspect. The focus for international orientation has shifted from Europe to the common Arab culture and Islam. The Islamic aspects appear in two different ways, either as calligraphy or as religious and cultural themes that can be treated figuratively. We find these different trends expressed in quite different ways, including artists such as Taha Hussein, Hussein El-Gebaly, Abdel Wahab Morsi, Salah Enani and Mostafa Abdel Moity. There was a shift in the political arts of the 1970s. Various Islamic aspects come more strongly into the visual arts at the expense of purely political aspects. However, there is little of 20th century Egyptian art that reaches northern Europe, except for the major drawing and graphic biennials.

Metal work and carving in three witnesses of skilled craftsmen, and the traditions are preserved to our time. The craftsmanship gained a new flourish in the weaving arts with Wissa Wassef’s weaving school for children in Harraneya, which has received a great deal of international attention.